Cryptocurrencies have become one of the most profitable investments of the 21st century. With their volatility, traders have managed to gain huge profits. While it all started with Bitcoin (BTC) as the first cryptocurrency, Ethereum (ETH) fully utilized the concept of decentralization by providing various daily-life services. While Ethereum has been a wonderful investment as a cryptocurrency, it has also excelled at providing the space for developers to launch their projects in the Ethereum network.

In this article, we are going to cover the essentials of Ethereum and look at what its future entails, especially after the full implementation of Ethereum 2.0. We will look at all the components that suggest that ETH may surpass $4,000 again in 2021. Let’s begin with some background information about ETH.

The founders of Ethereum are the Russian-Canadian programmer Vitalik Buterin and English computer scientist Gavin Wood. Buterin also founded Bitcoin Magazine, and Wood was previously involved in blockchain-based projects. Ethereum was introduced through a white paper in 2013, where Buterin depicted some of the ways that Bitcoin, the world’s first cryptocurrency, could be improved. If transactions were already decentralized, why could not other services be decentralized as well? This was the main point of Buterin.

To fund Ethereum, Buterin and Wood held fundraising campaigns. They were quite successful since they managed to raise around $18 million. In 2015, Ethereum was finally launched and the cryptocurrency market was changed once and for all.

How does Ethereum work?

Blockchain technology in cryptocurrencies archives decentralization by having a network of computer nodes that work together to verify transactions. In this way, if the majority of the nodes share a consensus about a certain transaction, then the transaction is valid. Similar to Bitcoin, Ethereum is a Proof-of-Work (PoW) cryptocurrency as of now, but this is likely to change with the upcoming Ethereum updates. A PoW cryptocurrency usually means that the nodes need to compete with one another on verifying transactions because the ones responsible for the verification are rewarded with free ETH tokens. Judging by this, the higher the computational power of a node, the higher the chances that a node can successfully mine ETH.

This also means that quite a lot of energy is consumed when mining, so mining ETH is not as profitable as it used to be when the network was less competitive, especially for smaller nodes. Nevertheless, this also means that the network is very secure since a hacker would need to control 51% of all the nodes to manipulate the data in the blockchain, which is technically impossible.

To make all these features possible, Ethereum has its native token Ether that can be used for running all the services mentioned above. Even though Ether is the main token in Ethereum there are also other token standards operating in the network, known as ERC tokens. ERC-20, ERC-223, ERC-723 (NFTs), and ERC-1155 are some of the token standards that you may have stumbled upon on Ethereum. All of them serve a different purpose in the network.

Let’s have a look at Ethereum’s tokenomics. Unlike Bitcoin, Ethereum does not have a limited supply. Because of this, the price of ETH is more likely to inflate than BTC. As of August 2021, Ethereum has a circulating supply of around 117 million ETH.

Cryptocurrencies usually undergo a lot of updates so that they are improved. For instance, the DAO fork in 2016 came as a result of a hack, and it ultimately led to the update that separated Ethereum (ETH) from Ethereum Classic (ETC). The latter is actually the original blockchain of Ethereum and consists of the nodes that decided not to update.

As groundbreaking and important as this fork was, perhaps the biggest update that Ethereum has ever had is going to be the Ethereum 2.0 update, which is also known as Serenity.

Ethereum 2.0 contains three main phases. The first phase known as “Phase 0” was integrated in December of 2020. This phase introduced the Beacon Chain, which is a Proof-of-Stake (PoS) blockchain in Ethereum and is going to be the main chain of Ethereum once all the other phases are implemented. A PoS blockchain, unlike PoW, requires that the nodes stake or lock their ETH tokens in order for the network to use them to maintain itself. During the staking period, the locked coins cannot be accessed. After the staking period is over, the nodes are rewarded with additional ETH as an incentive to keep staking.

The PoS consensus mechanism might be better than PoW because less energy is consumed, ultimately benefiting smaller nodes and having positive effects on the environmental aspects of mining. You can start staking in Ethereum now, where at least 32 ETH needs to be staked. Early stakers might receive as high as 20% interest for staking, but this percentage may lower between 7% and 4% yearly. The staked ETH is used for working on Ethereum 2.0 and its upcoming phases. The only downside of this is that the staking period is unknown, and it could even take years until Ethereum 2.0 is finalized.

“Phase 1” or the second phase aims to create shard chains and link them with the main chain, the Beacon Chain. It is yet unknown when this phase may occur, but it can happen in the following months.

The last phase or “Phase 2” plans to execute the shard chains, where the current Ethereum chain (Ethereum 1.0) is set to become one of the shards connected with the Beacon Chain. While the dates for the last two phases are yet unknown, this update is set to be one of the biggest updates in the cryptocurrency market.

In 2016, ETH increased in the first half of the year. Steadily increasing, it reached $20 for the first time in June of that year. The price declined to $8 by the end of the year.

2017 was also a very decent year for ETH investors. In the second quarter of the year, the price started increasing again, and it reached $400 for the first time in June. The was not the peak of the year, as Ethereum had another huge increase by the end of the year, reaching $826 in the final days of the year.

Following the bullish trend caused by the BTC halving of 2020, Ethereum continued increasing in 2021. It reached heights it had not reached before, with an all-time high of $4,362 being reached in May. The price dipped after that to around $1,800, but it has started increasing again. At the time of writing this, ETH is around $3,230.

With this price and a circulating supply of around 117 million, Ethereum’s market capitalization is around $373 billion, placing Ethereum at number 2 in crypto market rankings, with Bitcoin (BTC) being at number 1.

Related: Should I Buy Ethereum?

The recent price increase of ETH suggests that the bull run is not over. With Bitcoin and other cryptocurrencies constantly increasing, many experts predict that ETH can surpass its price record again this year. 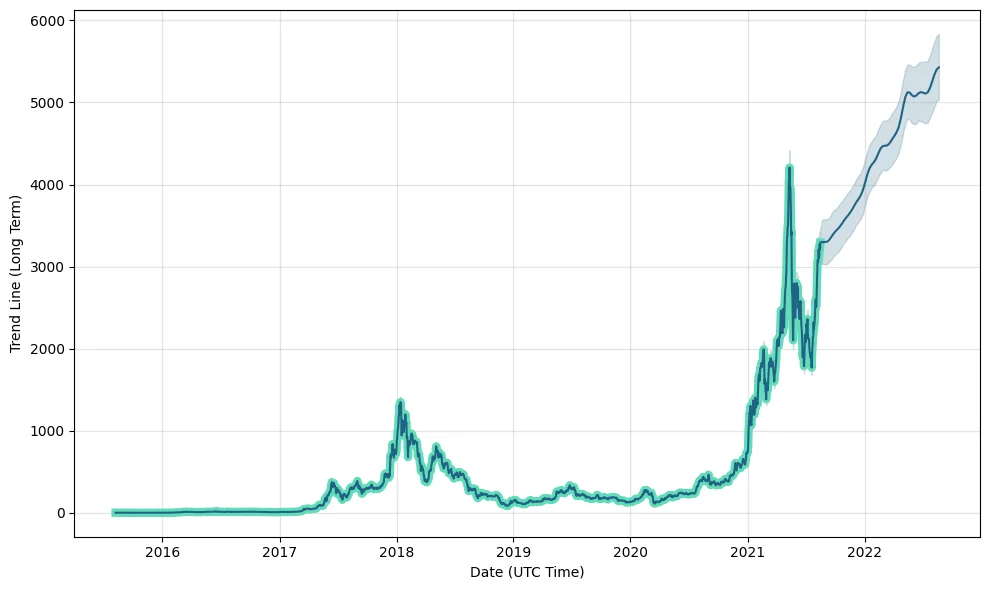 Previsioni Bitcoin also predicts an increase in the price of ETH in the following months. They predict that ETH can surpass $9,000 by December of this year. Furthermore, they predict that if Ethereum continues at this rate, it can get very close to $15,000 by May of 2022. 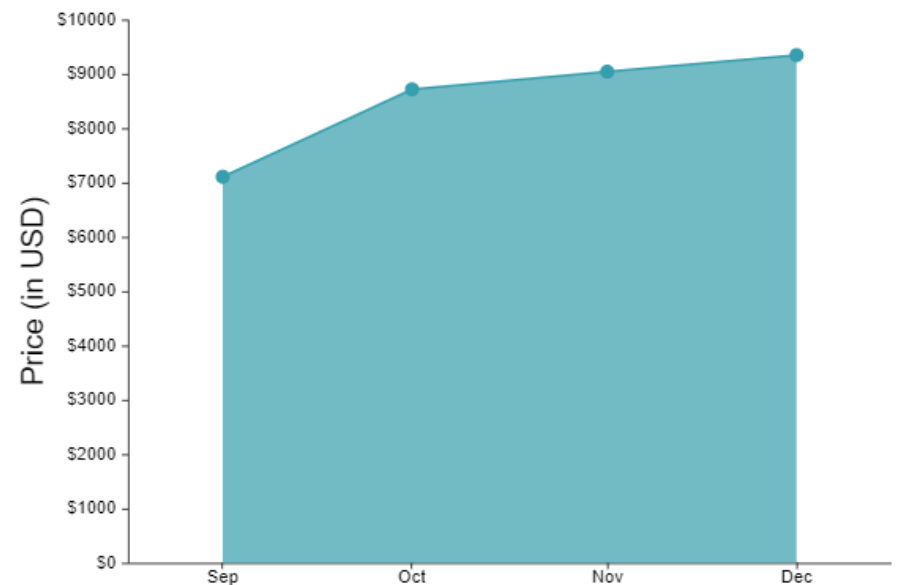 YouTuber Altcoin Daily in a recent video has predicted that Ethereum can increase massively in the short term if Bitcoin continues in the way that it has started. They predict that ETH is likely to hit $10,000 this year.

The successful investor Raoul Pal, who is the co-founder and CEO of Real Vision Group, has predicted that ETH can hit at least $20,000 by the end of this bullish cycle. This prediction was derived from his charts and analyses.

Yeah, ETH might well go to $20,000 this cycle… (exact same as BTC last cycle, by market cap ETH will be bigger) pic.twitter.com/LC8VffAqwh

James Wang, former Ark Investment Management analyst, in an interview with Dave Lee, talks about Ethereum and other cryptocurrencies, and he gives his own opinion on why he chose to continue his work with Ethereum and what its potential can be. If we focus on only one use case of Ethereum, that of DeFi, Ethereum can grow massively. The global banking and auditing industry has a revenue of $3 trillion. He says that if ETH manages to reach 0.1% of that revenue, ETH can hit $4,000, which has already happened once. He then adds, “If Ethereum captures just 1% of that economic revenue, Ether would be around $40,000.” This comes with only examining the DeFi use case, while Ethereum has multiple use cases, so he implies that Ethereum could grow much more than that in the long run.

It cannot be predicted how the upcoming phases of Ethereum 2.0 might affect the price of ETH. Despite that, we at Crypto Academy predict that the Serenity update can be one of the many factors that can increase the longevity of Ethereum and potentially make it an even stronger cryptocurrency than Bitcoin. While the supply of Ethereum might not be limited, its use cases are what make it one of the best cryptocurrency projects to exist.

Additionally, adding the NFT that is receiving more attention than ever before can only increase the price of ETH. Let’s not forget that a shift to PoS was long overdue, and when staking is fully utilized, a lot of investors may demand ETH. Due to all these reasons, we predict that Ethereum is going to increase massively in both the short run and the long run.

For 2021, if the price increases at the same rate in the following months, ETH might hit at least $27,000. This is entirely possible if Bitcoin continues to rise in the same way as it has the past few weeks.

As for 2022, the bullish run might continue for ETH. We predict that a price of $29,000 is possible for Ethereum midway through 2022. The last half of the year might be more stable.

By 2024, the second phase of Ethereum 2.0 might have been implemented by then, and also the last phase might be close. With the BTC halving occurring that year, the price might not be bullish immediately. However, $35,000 is entirely possible for 1 ETH.

The first months of 2025 might see the biggest price increase of ETH if Bitcoin causes another bullish trend. No matter how high BTC may go that year, we predict that ETH can become an even stronger project and reach around $110,000 in 2025. It is obvious that Ethereum has that potential, and it can even surpass Bitcoin one day because of the numerous cases Ethereum has.

In the next five years, Serenity is likely to be over. With PoS fully implemented and Ethereum being one of the biggest in the market (if not the biggest), the demand for ETH and staking can be over the charts. ETH might hit $150,000 in the long term. 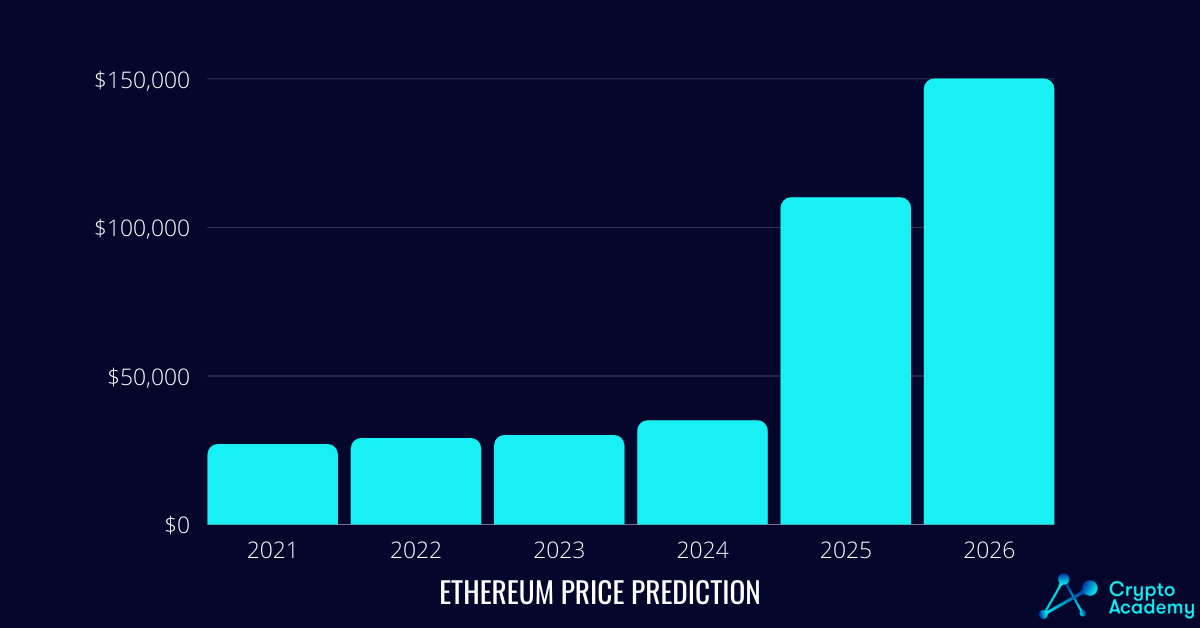 Crypto Academy Ethereum Price Prediction for 2021 and the upcoming years.

How To Buy Ethereum (ETH)?

You can buy Ethereum easily in three steps:

Once verifying your account, you need to deposit funds. You can do so by transferring tokens from another wallet into your exchange account. If you do not have other coins in another wallet, you can directly buy ETH using fiat currencies through debit or credit cards.

Once you have funds in your account (i.e. USDT), you can trade them with ETH. This is as simple as it gets when it comes to buying ETH.

How to Store Ethereum?

Is ETH a good investment?

ETH is a very good investment because its price is predicted to increase in the following months, and it is one of the most promising projects in the market with its many use cases.

Yes, the price of ETH can increase. The short-term increase might be influenced by BTC, but the long-term increase may be caused by Ethereum’s many use cases (i.e. DeFi), Ethereum 2.0 update, etc.

Also Read: What Is Ethereum? A Step-By-Step Guide