Metahero Price Prediction 2022 and Beyond – Can HERO Eventually Reach $1? 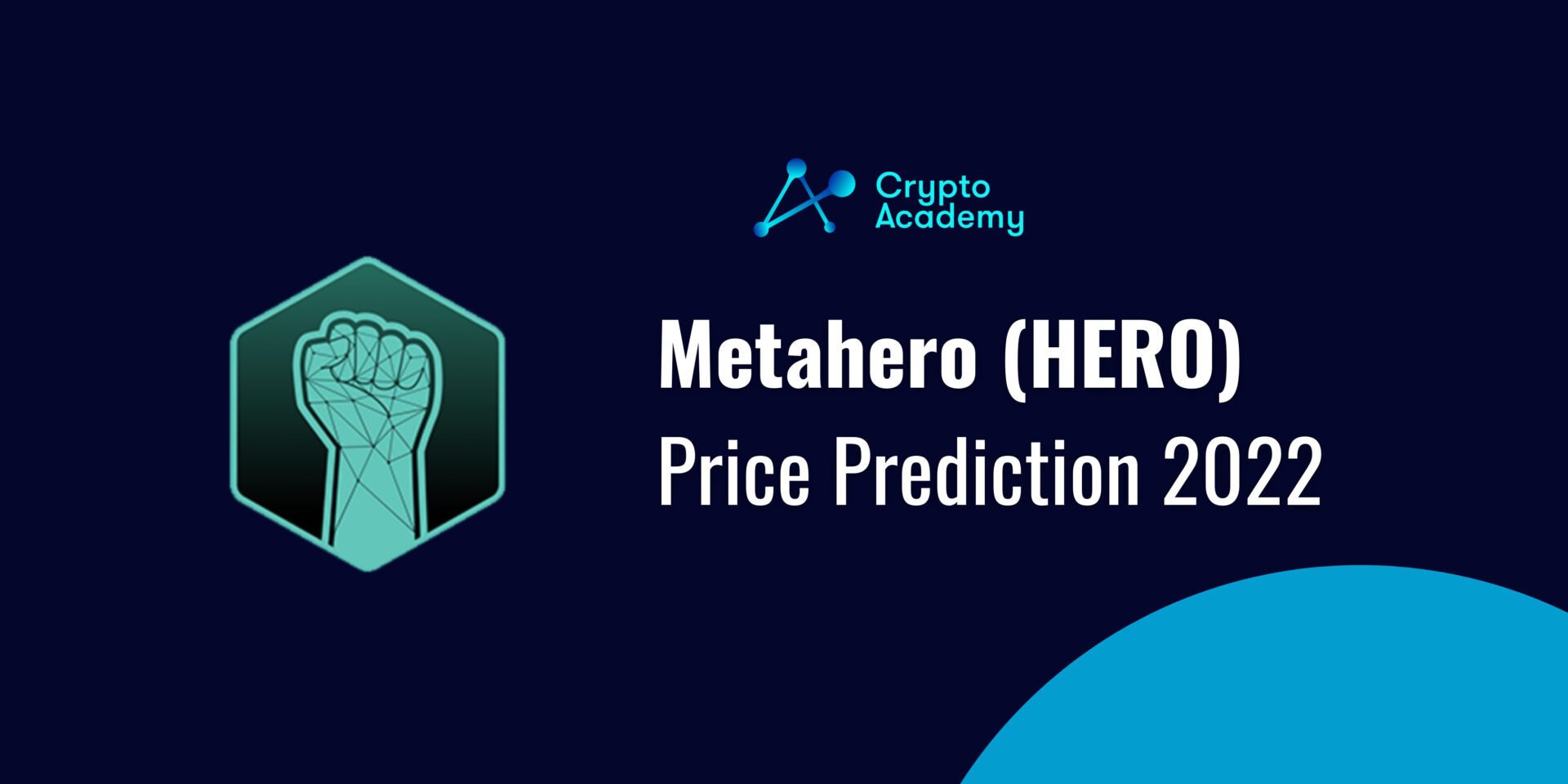 With the rise of cryptocurrencies came the importance of other digital assets such as Non-Fungible Tokens (NFTs). The latter helped various artists monetize their works and gain huge profits in recent years, especially in 2021. But the real utility of NFTs got exploited with the emergence of the Metaverse concept. Metaverse is a virtual reality that allows users to connect in a virtual world.

The Metaverse requires you to have your own character as an NFT and use that character within the virtual world. Here comes the use of Metahero. Metahero allows users to scan their physical appearance and mint it as an NFT, which then can be used within the Metaverse. As the first crypto project to do so, Metahero has gained the support of multiple influencers and investors.

In this article, we are going to discuss the fundamentals of Metahero, its future, as well as its potential price for the upcoming years. Let’s begin with some brief information on Metahero (HERO).

Metahero provides the opportunity to create an NFT of yourself through 3D scanning, making it the first crypto project to offer such a service. This comes in high demand as the metaverse has been gaining a lot of attention lately. Metahero achieves this through Wolf Digital World, which is a leading industry giant when it comes to 3D scanning.

Initially starting with $10 million worth of fundings from the founder of Metahero, the project has now become one of the most promising cryptocurrencies in the market. Robert Gryn, the founder and CEO of Metahero, was previously involved with tech-related ventures that gave him the needed knowledge for launching such a project. Other team members include Jeremy Lopez, Bally Singh, Alkesos Radic, Alex Gryn, etc. All of them were also previously engaged with blockchain technology or other tech startups.

Projects such as Metahero are essential when it comes to crypto mass adoption. Being one of the first to do so, Metahero could grow to huge levels in the future. The concept of Metascanning was not born with Metahero, but the latter has exploited that concept and has become the most efficient bridge between reality and the metaverse. 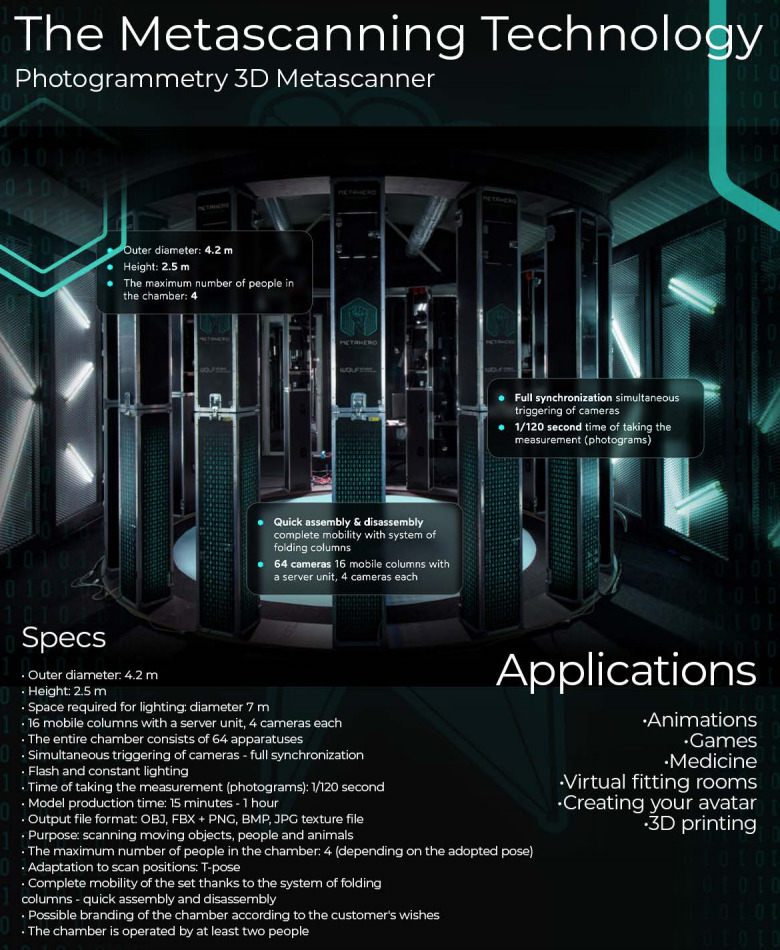 Metahero aims to change various entertainment fields, including gaming, music, sports, fashion, but also developers, governments, organizations, etc. All of them have already started incorporating the concept of NFTs.

Metahero also has the HERO App, which allows HERO hodlers to access their funds and easily take action regarding the funds. Further development on the app is set to come in the coming months.

In addition to that, Metahero has also developed the HEROSwap, which is a decentralized exchange that allows users to easily swap their HERO tokens with other tokens.

When looking at the roadmap of Metahero, it has completed everything that they had displayed for the first three quarters of 2021, which included the launch of the token, partnering with investors, creating the website, holding presales, completing the CertiK audit, developing the Metahero app, being listed on a major CEX, etc.

Plenty of other updates is set to come in the coming months. Another roadmap is set to be shared with the Metahero community once all the goals in the existing roadmap are completed, which is on course to be done in the first quarter of 2022.

It is safe to say that the future seems exciting for a project such as Metahero.

In terms of tokenomics, Metahero has a limited supply of 10 billion HERO. Here is how the supply is allocated: 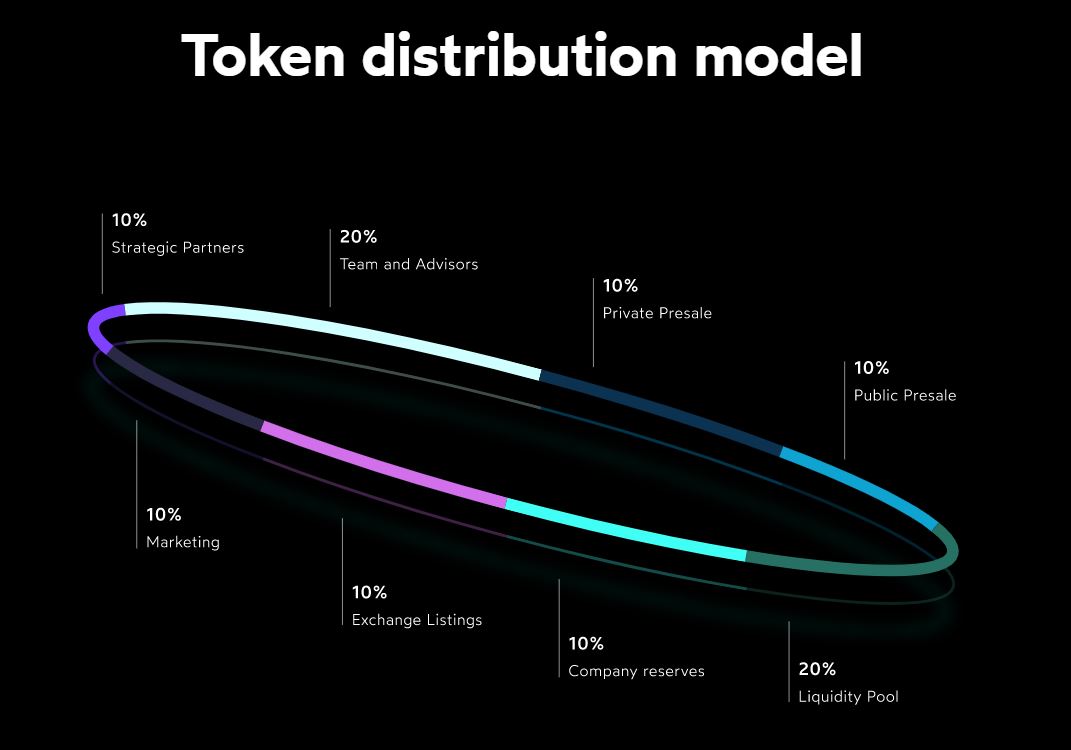 According to CoinMarketCap, Metahero (HERO) was trading at an average price of $0.007 in July of 2021. The started increasing in the following weeks, as HERO reached as high as $0.04 by August. In September, the price increased at larger rates, as the price reached $0.10 for the first time, reaching a historical milestone for HERO hodlers.

HERO kept its bullish nature in the weeks after that. It reached an all-time high at $0.25 in the early days of December. The price has dipped after that, and it is currently trading at around $0.15 at the time of writing.

With this price and a circulating supply of 4.9 billion HERO, the market cap of Metahero is around $757 million, while the fully diluted market cap is around $1.5 billion.

Metahero remains one of the most promising altcoins of the crypto market, showing loads of potential due to its upcoming projects, utility, as well as its concept of bridging the real world with the virtual one.

It is also worth noting that Metahero has created plenty of valuable partnerships with some of the world’s most successful ventures and investors, which could easily help HERO further grow in the coming years.

Furthermore, Metahero is currently developing another project, the Everdome, which is a Metaverse-related crypto project that aims to increase the demand for HERO tokens even more. HERO hodlers can benefit from being listed for slots as well as receiving discounts in the Everdome metaverse.

Because of such fundamentals, we at Crypto Academy predict that the price of HERO can increase at large rates in the coming years.

Metahero (HERO) Price Forecast April 2022: In April, HERO might hit a high of $0.16. It’s possible that the cheapest price will be approximately $0.12.

Metahero (HERO) Price Prediction May 2022: If the current trend continues, HERO might hit $0.19 in May, with the lowest point of the month being around $0.14.

Metahero (HERO) Price Forecast June 2022: The price may fall marginally in June. It’s possible that the maximum point will be about $0.14, while the lowest point will be around $0.10.

Metahero (HERO) Price Forecast August 2022: In August, the price of HERO might start to rebound, reaching as high as $0.13. It’s possible that the cheapest price will be about $0.09.

Metahero (HERO) Price Prediction November 2022: With a price of roughly $0.25, HERO might approach its all-time high in November. In November, the lowest price may be approximately $0.20.

Metahero (HERO) Price Forecast December 2022: Last but not least, HERO may extend its winning streak into the last month of the year. It’s possible that the price may drop to $0.24, but it might also rise to a new all-time high at $0.30.

In the first quarter of the year, HERO could be looking at a price correction after the dip from its all-time high in December of 2021. The price could be aiming as high as $0.12 in March, but the rice may overall be bearish in this quarter.

In the second quarter of the year, HERO could continue to move upward. Eventually, HERO could hit as high as $0.19. Nonetheless, the minimum price throughout this period might be around $0.10.

The third quarter of 2022 could be slightly bearish for Metahero. The price may decline during this period to around $0.06, other things equal. Nonetheless, the price might start recovering in August and go as high as $0.13.

The last quarter of the year could prove to be quite bullish for HERO. The price might enter a bullish run and start increasing at larger rates. The price of HERO could eventually reach a new all-time high and hit $0.30, with the lowest price of the quarter being around $0.16. 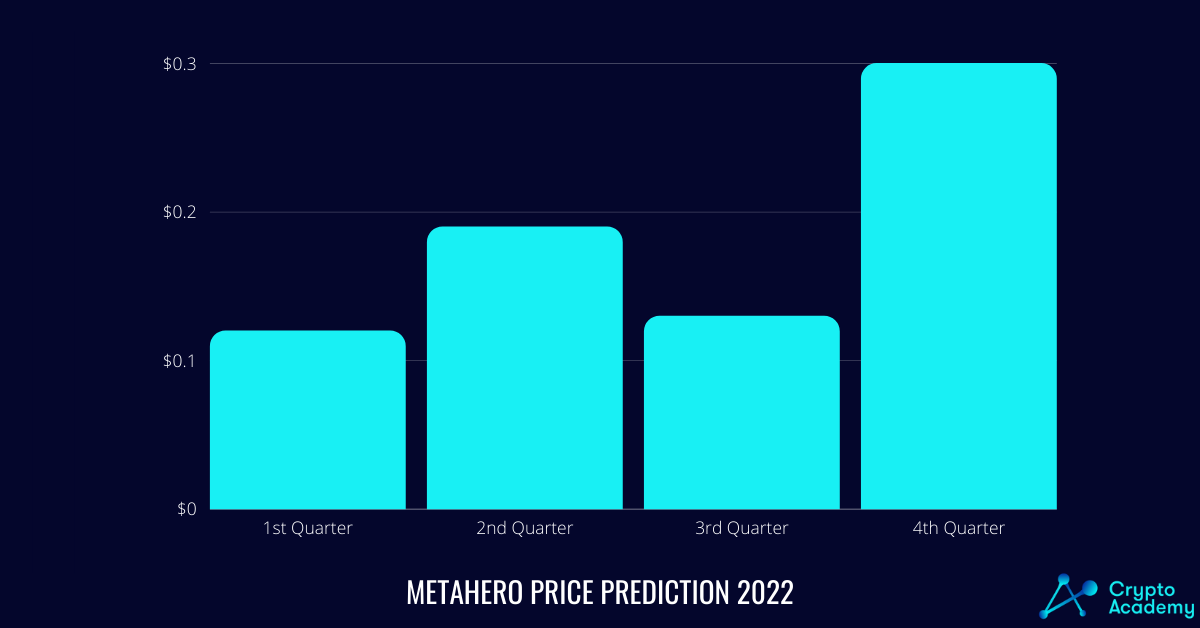 In 2022, we could see HERO decline in the first quarter of the year. Nonetheless, we could see the price remain above $0.10 in the coming months of the year. HERO could head upward once again by the end of the year, as our prediction sees HERO reach a new high of $0.30 by December.

By 2025, we could see HERO continue its bullish run started the year before, as the market aims for another bullish run. HERO could reach as high as $4 in the first half of the year. After that, the price could stabilize.

By 2026, we could see mass adoption already playing its part in terms of the price of HERO. With the utility that HERO provides regarding the metaverse, which is perceived by many as the future of communication, HERO could aim to huge heights. Businesses may already integrate cryptocurrencies such as HERO as a means of payment, but also as the key to connecting humans with the metaverse. Because of this, we predict that HERO can reach at least $10 by 2026. 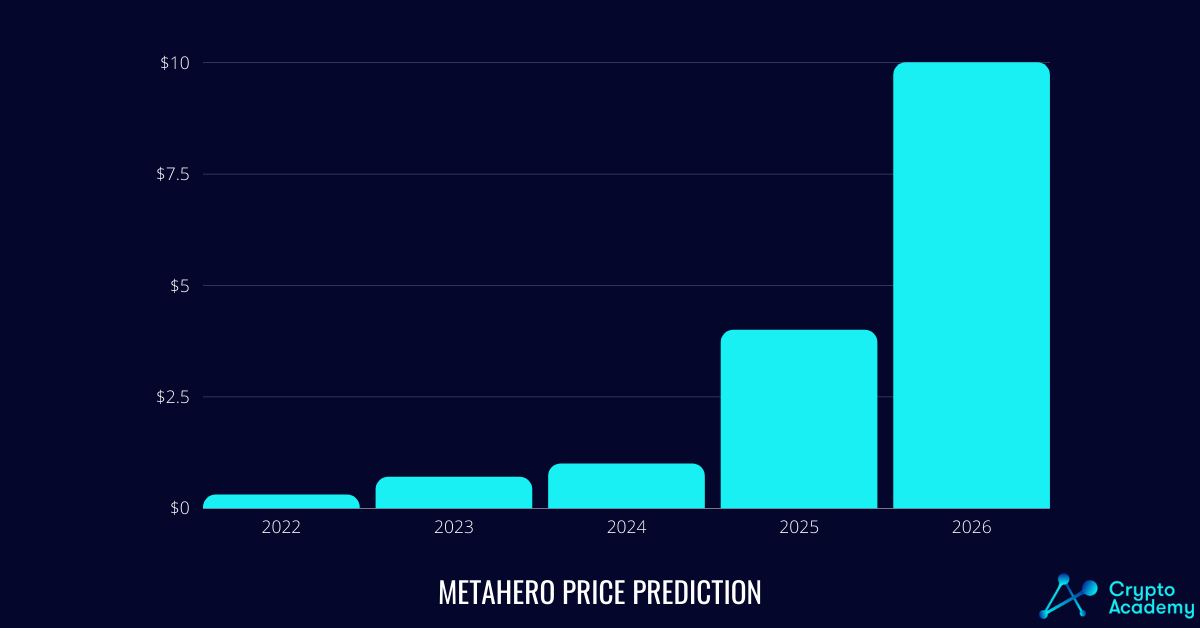 Due to the fundamentals of Metahero, many experts predict that its price can increase at large rates in the coming years. Here is what some of them have to say: 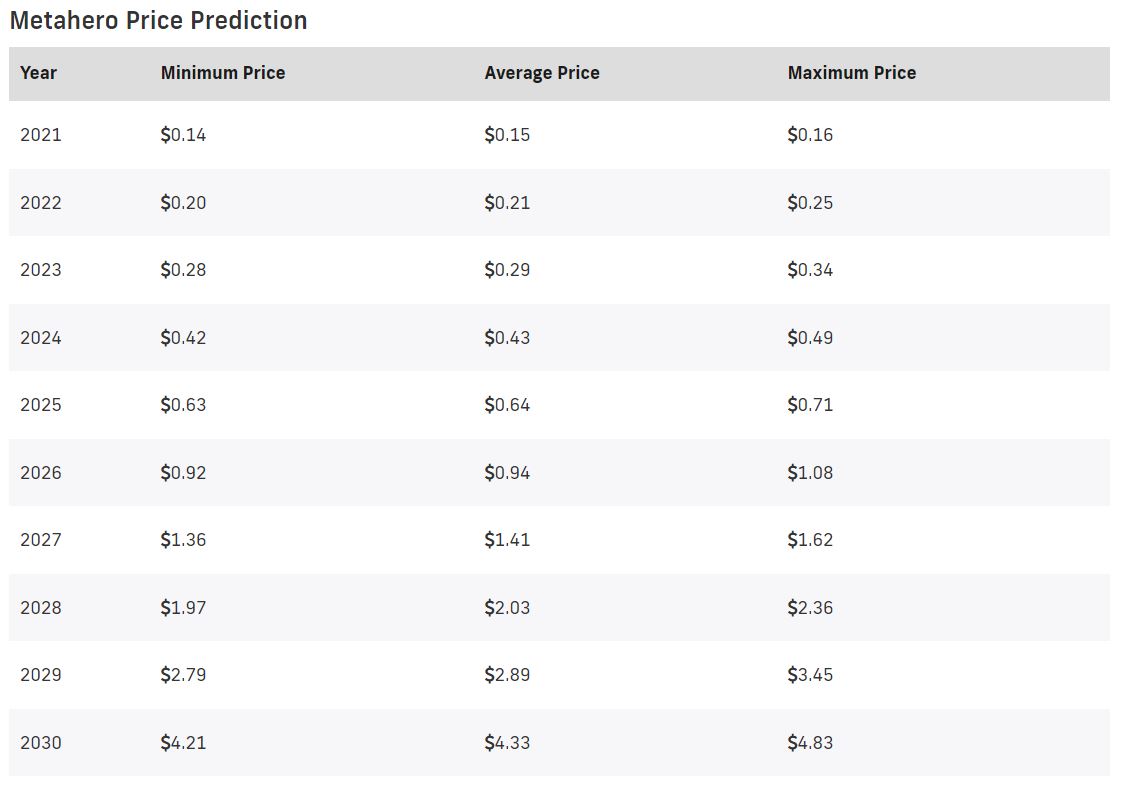 YouTuber Ryan Matta gives a careful analysis of Metahero and its promising roadmap, and he forecasts that HERO can go as high as $3 by 2025. That would see HERO reach a market cap of $15 billion in today’s market, which is attainable for 2025. He also suggests that HERO could possibly go to $1 by 2022 alone.

YouTuber Cheeky Crypto also gives an analysis on Metahero, both on the fundamental and technical aspects of this project. Based on his analysis, Metahero has the potential to go 100x from its current position in the longer run.

How to Buy Metahero (HERO)?

You can directly buy HERO tokens through using exchanges that support Metahero, such as Gate.io, KuCoin, ZT, SimpleSwap, etc. Nonetheless, if you prefer to use a decentralized exchange, here is what you need to do:

The first thing you need to do is to create an exchange account that supports BNB tokens, such as Binance. Once you create an account, you need to verify your account in order to use its features freely.

Once you create your account, you can fund it either by transferring tokens from another wallet or by buying USDT through the use of a debit or credit card. Keep in mind that there could be fees for buying with fiat currencies.

Once you fund your account, you can begin trading. Go to the trading section of the exchange and exchange your USDT with BNB. Enter the amount you want to purchase and simply press “BUY.”

Now that you have purchased BNB, you need to create a MetaMask wallet if you do not have one. The creation process is quite easy. Make sure to save your seed phrase somewhere safe.

Once you create a MetaMask wallet, you need to add the Binance Smart Chain (BSC) into the wallet so that you can transfer your BNB tokens.

Go to “Add Network” and type the following:

Now that you have added BSC to MetaMask, you can transfer your purchased BNB to your wallet. Make sure to type the correct wallet address so that your tokens do not go somewhere else.

After you receive your tokens, head to PancakeSwap with your browser and simply press “Connect Wallet.” Your MetaMask wallet will automatically connect with the Decentralized Exchange if you are logged in.

Type MetaHero on the search bar and enter the amount of HERO you want to purchase with your BNB. Leave some BNB just in case that there are gas fees. All you have to do now is press “SWAP.”

You now successfully own HERO tokens.

It is quite likely that HERO can reach $1 in the coming months/years due to the promising fundamentals of the project. Metahero can exceed that amount and even aim for $10 in the longer run.

Will the price of HERO increase?

The price of HERO is expected to increase in the coming years due to the utility of this coin as well as its limited supply, which makes Metahero inflation-free.

Where can I buy Metahero?

You can buy Metahero in KuCoin or Gate.io. If you prefer a decentralized exchange, you can use PancakeSwap through MetaMask wallet.