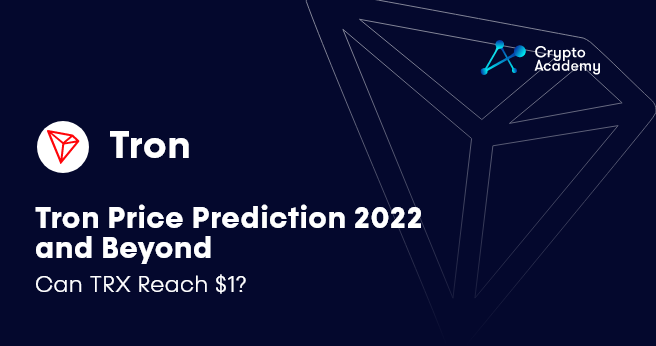 Diversifying your crypto portfolio with cryptos that have a daily rising market cap is always a smart idea. TRON is one of the most trustworthy cryptocurrencies, particularly for those searching for low-cost trading options. TRON is a decentralized blockchain-based platform with its own native cryptocurrency, Tronix (TRX). Justin Sun created it back in 2017. The platform supports entertainment apps and allows for low-cost digital content sharing.

By August 2021, the site had managed to gather around 50 million users worldwide. Tron is aimed at taking over browser entertainment companies such as Hulu and Netflix, as its motto implies (“Decentralize the web”). The platform wishes to cut out the corporate middlemen from entertainment platforms. For the most part, the platform serves as a host for entertainment apps and makes it easy to distribute digital material at a low cost.

Tron is a technology and platform built on the blockchain, a distributed database system that acts as the basis for cryptocurrencies. It is now regarded as one of the most significant blockchain-based platforms out there. Tron was created with the goal of eliminating the need for centralized systems to execute online transactions.

Tron has been built as a decentralized system with a primary emphasis on content delivery. The Tron network has two basic goals. Aside from decentralization, the Tron system aims to promote content delivery and distribution. The Tron blockchain is all about smart contracts. To write smart contracts for the Tron network, you need to use Solidity, a programming language that was first used on the Ethereum network.

This indicates that Tron smart contracts may work with Ethereum smart contracts. Aside from compatibility, Tron has developed tools for smart contracts. Unlike Ethereum, Tron’s smart contracts are much more flexible, and the blockchain processing rates are significantly quicker. Advanced capabilities let developers create dApps and launch smart contracts using Tron. Tron may be used to build decentralized exchanges, lending services, online games, and movie streaming networks, among other things. 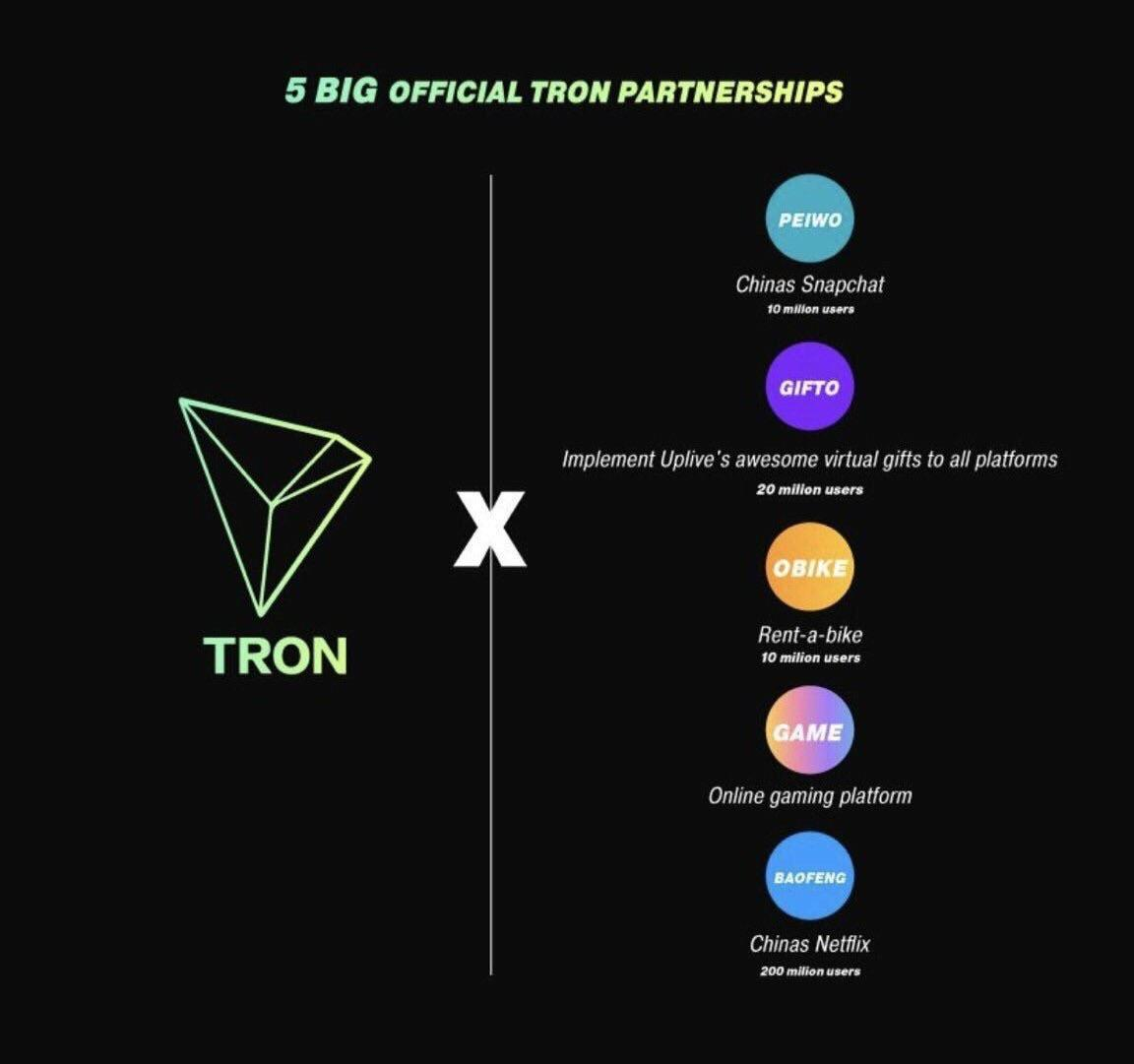 There are several crypto-payment outlets that accept TRX. The price range of the token could change dramatically if people start using it as a way to pay for things every day instead of just to pay network fees.

The high volatility of cryptocurrency makes it an unreliable source of value for unlucky investors. In times of market turmoil, it may be quite volatile: in late 2017, the overall market cap jumped by 400% after an inflow of new investors. Unfortunately, the volatile value of a currency, whether fiat or crypto, prevents it from becoming a commonly used medium of exchange. Tron announced that it had bought BitTorrent, a communication protocol for data sharing. Furthermore, Justin Sun intends to integrate BitTorrent into its TRX ecosystem.

The degree to which the Tron consensus process is decentralized has been a subject of debate. A few have argued that Justin Sun’s election as super-representative was a little too easy. Since Justin Sun is TRON’s sole well-known face, he may have enormous de facto power over the network’s members. Thus raising concerns about the network’s democratic principles. TRON’s consensus-based approach, on the other hand, may contribute to the stabilization of a volatile asset class. The network might be able to serve as a decentralized central bank.

Just like with Ether (ETH), Tron (TRX) may be thought of as a token. Tron’s native coin, TRX, is utilized to power the network’s applications. The token has a total supply of 101,900,409,1844 TRX. Whereas the circulating supply of the token is 101.8 TRX. The token is mineable with a block reward of 32 TRX. The token runs on the TRON blockchain, and the consensus mechanism is Delegated Proof of Stake (DPoS).

At Crypto Academy, we prioritize research above everything else. Using our own analysis of Tron, we were able to provide a forecast for the value of TRX, the token used by the network. Read further down below for more information.

Taking a glance at the token charts for this year provides us with a solid indication of the token’s price trajectory. According to current statistics, TRX saw two significant price peaks this year. The first was in January when the token reached $0.078 in the middle of the month. The second price peak occurred in late March at $0.078. Based on this data, we anticipate that the token will achieve another similar peak during the next few month., Perhaps reaching a maximum price of $0.092 with the normal daily price of $0.08.

According to our specialist research, the price of TRON is expected to reach a minimum of $0.17 by 2024. TRX’s price might reach a maximum of $0.23 and a normal standard exchange rate of $0.19. Keep in mind that 2024 is the year of the next bitcoin halving, which may cause a lot of chaos in the cryptocurrency market.

According to our estimate, the year 2026 is expected to be a bullish year for TRON. The cost of TRON is expected to reach at least a plausible level of $0.40 by 2026. As per our data, the TRX cost might reach the maximum feasible level of $1, compared to the average predicted cost of $0.73. 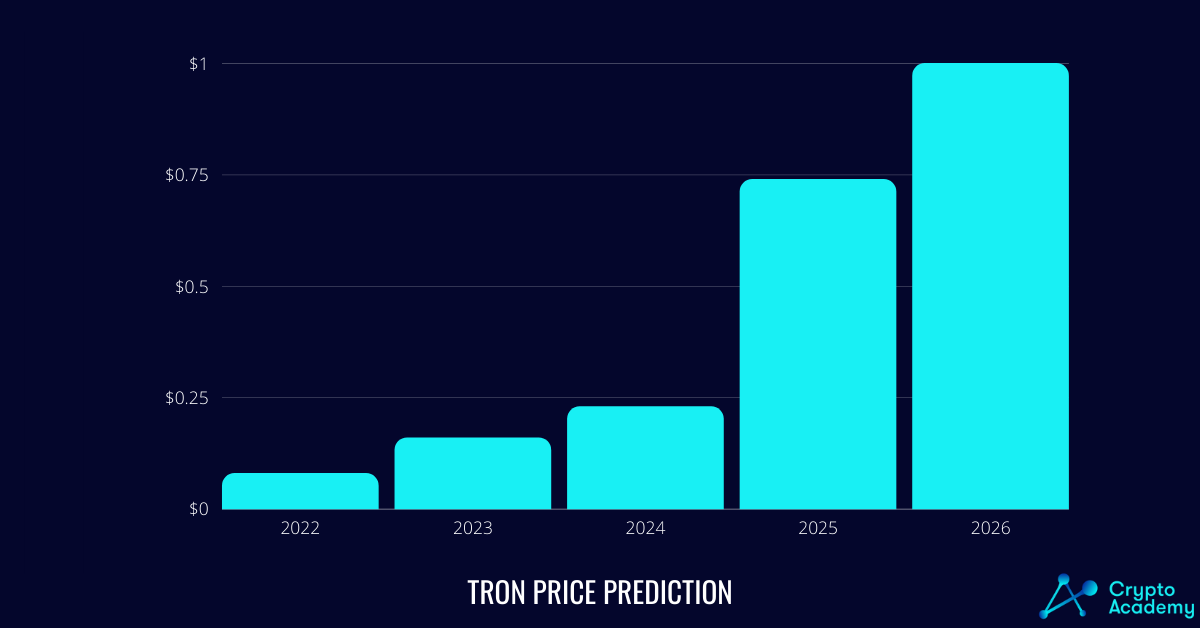 Price Prediction is rapidly establishing itself as the world’s leading source of crypto news, including real-time information on cryptocurrency prices. According to Price Prediction, the TRX’s price might increase from an average of $0.083 in 2022 to $0.26 in 2025 and then to $1.64 in 2030.

CoinCodex is a seasoned source for cryptocurrency price forecasts. CoinCodex’s technical analysis of TRON revealed that in its short-term TRON price forecast, CoinCodex predicted that TRX might decline around 10% to $0.057 by 30 April.

Government Capital Corporation is a market leader in public finance, delivering a comprehensive variety of financing solutions to their customers. With thousands of transactions worth billions, the crew is unquestionably knowledgeable. Gov Capital reportedly predicted slower initial price growth for TRON, forecasting that it may trade at $0.14 next year and $0.55 in April 2027.

CoinSwitch is a legitimate exchange and one of the largest in the cryptocurrency market. It is well-known in the cryptocurrency community for its crypto price forecasts. Numerous crypto experts from CoinSwtich advise you to invest in TRON since the price may reach $0.55 in the next five years!

When it comes to cryptocurrency market forecasts, Value Prediction is a very well-known trading algorithm that uses the weighted average price computed over a specific period of time to create recommendations. According to Value Prediction, TRON’s price projection is expected to exhibit tremendous potential by the end of 2022 and might reach $0.109 as a long-term appreciation.

How To Buy Tron (TRX)

Tron is a well-known cryptocurrency, so finding a platform to purchase it should be straightforward. TRX is best acquired via Binance. They provide the simplest and quickest crypto to cryptocurrency exchange, including USDT to TRON and a variety of other choices. We’ve included a little tutorial below to assist you in getting started with your Tron investing adventure.

The biggest Bitcoin broker in the industry is Coinbase. Once you’ve signed up and completed the mobile code verification process, you may deposit fiat cash and go directly to the “buy/sell” button to purchase BTC. Verify that you have the funds to purchase the TRON (TRX) that you need. This may be accomplished by conducting a “mock” sale on Binance.

Binance registration is simple, requiring only an email verification and two-factor authentication. Select “funds” after you’ve successfully logged into Binance. Scroll down to BTC and click on the deposit button. There, you will be provided with an Ethereum address. Never transfer crypto to an address that belongs to someone else.

After you’ve transferred your crypto to your Binance account, navigate to “Exchange” and pick the TRX pairing. 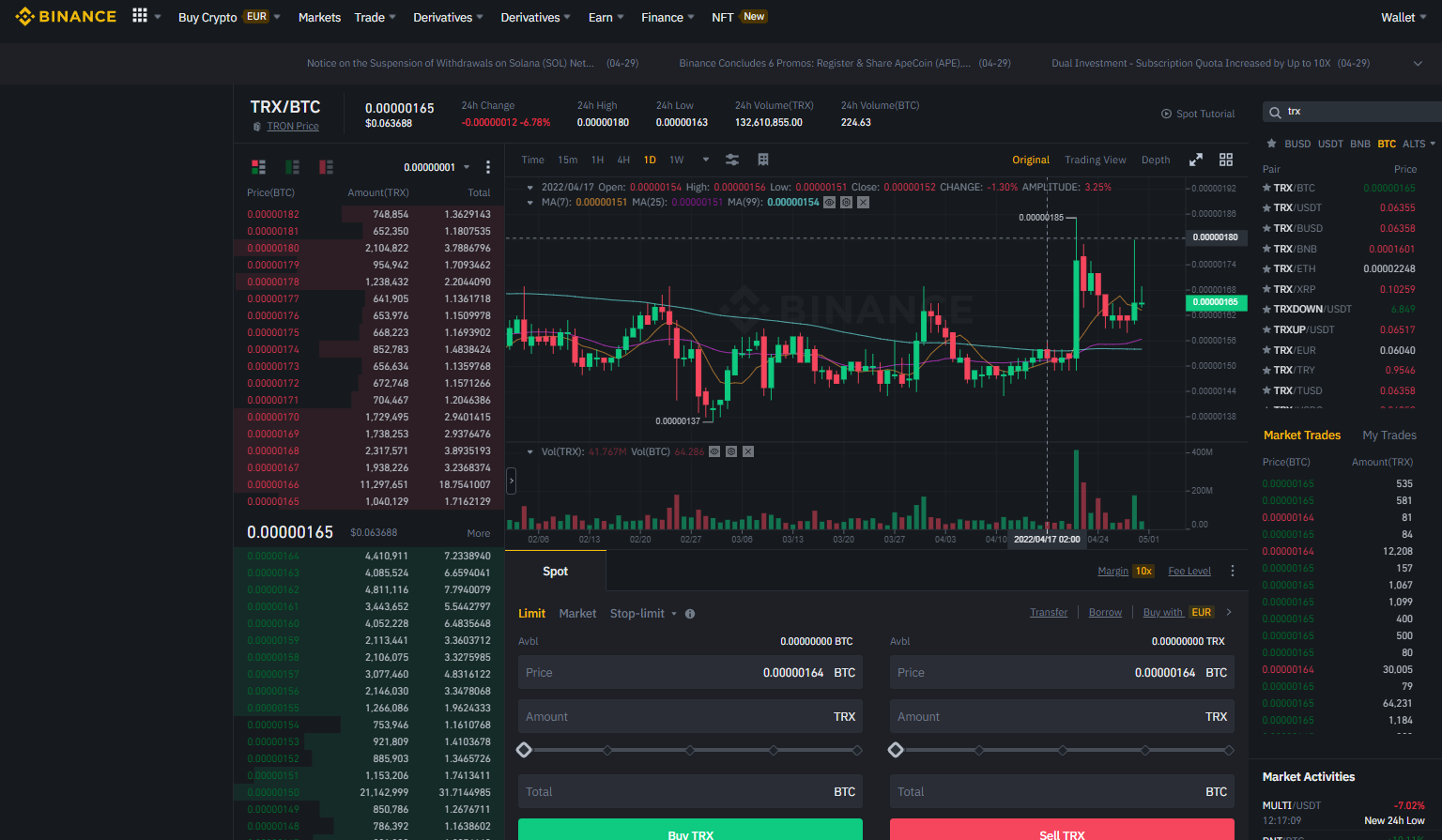 And once it’s done, you may now purchase as much TRX as you can spare. You can do this on the dashboard underneath the graph by picking the desired amount and comparing it to your current BTC balance. Keep in mind that we used BTC in this example, but you can also use other cryptocurrencies.

Should I invest in Tron?

Tron, like any other digital currency, had a good year in 2022, as did Bitcoin and other major cryptocurrencies. The price began the year at $0.075 and reached an annual low during the first half of the year. Tron’s price is anticipated to continue rising until the end of the year, closing the year with a good run. But always make sure to do your own research before investing.

Tron is now one of the most rapidly increasing blockchains. It has a total of more than 2.8 billion exchange transactions. Even though Bitcoin can process up to 6 transactions per second, Tron claims to be able to process up to 2,000 transactions every second, which is astonishing.

Will Tron be added to Coinbase?

Unfortunately, TRON is not accessible via the Coinbase app or Wallet. And we haven’t been able to accumulate enough knowledge for its future.

You may acquire Tron on a cryptocurrency exchange such as Coinbase with a credit card. A Tron wallet will need to be created and authorized before you can be given the opportunity to acquire any TRX.

How does Tron work?

Before Tron, other projects invented decentralized apps, smart contracts, tokens, and delegated proof-of-stake consensus. But what makes it special is that Tron made it technology-friendly with Ethereum.