Saitama Token Price Prediction 2022 and Beyond – Will SAITAMA Eventually Reach $1? 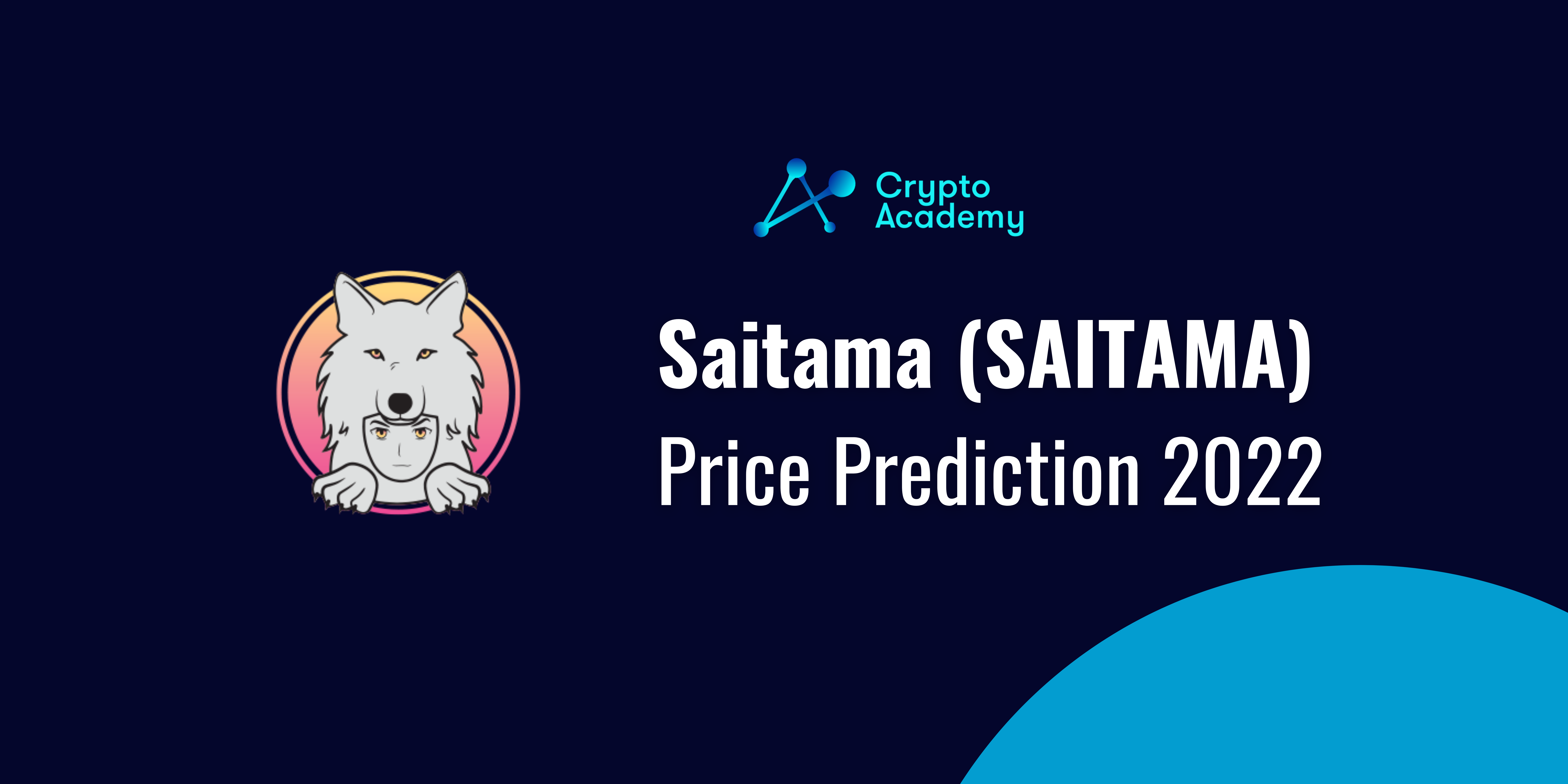 With the rise of cryptocurrencies came the rise of meme-based projects that have recently gained so much attention. The hype for meme coins initially began with cryptocurrencies such as Dogecoin. Then, the likes of Shiba Inu followed. While clearly influenced by the former, some meme-influenced cryptocurrencies have actually demonstrated seriousness in their fundamentals. One particular example would be Saitama (SAITAMA).

Saitama was initially perceived as a meme coin, but as time passed, it made its name known with its promising components displayed in the whitepaper, as well as the goals that why have already been achieved.

In this article, we are going to cover the essentials of Saitama so that you have a better idea of what type of cryptocurrency it is. Furthermore, we are also going to give you some future price predictions for SAITAMA. Let’s begin with some of the basics of this project.

As suggested, the creation of Saitama was influenced by the success of Dogecoin. Saitama is a mountain region in Japan. One of the legends of Saitama is that a ghost dog roams there, and there have been cases where people have actually witnessed this dog. The Saitama dog is perceived as the guardian of good fortune, which is also the main driving point of the Saitama cryptocurrency.

The creator of Saitama is anonymous, and the project was officially launched in May of 2021. The Saitama community started increasing at large rates. After a certain period, the creator left the team and handed the ownership to the Saitama community. This led to the creation of a fully community-driven project, which is increasing by the day. After that, a group of experts took over on the development aspect of Saitama in order for the latter to achieve its projected goals. Since Saitama as a project strives for transparency, users can directly link with the developers and talk to them if they need any help or if they need clarification.

The goal of Saitama is to educate people who have no idea how to survive financial crises and learn more about the concept of financial freedom. Saitama aims to be the pillar of financial education for young people who want to overcome the difficulties of surviving the hardships of this capitalistic market.

Saitama is built on the Ethereum network with the ERC-20 standard. With Ethereum remaining the second most important cryptocurrency of all time, the success of Saitama could be attributed to Ethereum’s innovative environment.

Let’s talk about the SATAMA token. As an ERC-20 token, the smart contracts of Saitama make sure that holders are protected from whale investors.

Each SAITAMA transaction is taxed with 2%, which is then distributed to SAITAMA hodlers. Another 2% of each transaction is burned, making SAITAMA a deflationary currency. The coding in SAITAMA is done in such a way that prevents whalers from taking over and dumping the price of SAITAMA. This is yet another reason why the Wolfpack community of Saitama has kept increasing over the months.

Currently, Saitama is working on creating the SaitaMask, which is a software-based wallet that can be used to ensure more safety for SAITAMA hodlers. This wallet aims to make DeFi services easily accessible for the Wolfpack. Users can directly buy, sell, swap, or transfer their tokens. To use this wallet, users need to go through a verification process in order to ensure more security. Last but not least, SaitaMask may serve as a bridge for the users that want to use the Saitama Edutainment platform.

The SaitaEdutainment platform aims to be as the name suggests; a medium for both education and entertainment. The purpose of this project is to achieve the initial goal of Saitama, which is educating young people so that they have financial knowledge and freedom. Moreover, SaitaEdutainment also allows other people to share their knowledge and be rewarded as a result. Anyone that creates content can share their financial knowledge, help others, and be paid as a result.

Other features of Saitama involve the SaitaMaker. SaitaMaker is a platform that enables users to launch and share their Non-Fungible Tokens (NFTs) within the Saitama network. This allows artistically creative people to monetize their artworks and further boost the growth of the Saitama project.

To ensure that no FUD is caused in the community, Saitama is creating the Anti-FUD Central, which is a useful method for addressing any wrong information about Saitama displayed on the internet. In this way, all the concerns of SAITAMA hodlers can be alleviated.

The Saitama roadmap includes five main stages. The first stage involved the fair launch, releasing the whitepaper, contract audit, and other necessary requirements to be successfully integrated into the market. The second stage involved the increase of the Saitama Wolfpack community and having a more aggressive marketing campaign.

Currently, Saitama is in the third stage, which involves creating partnerships, increasing the community even more, and being listed in major cryptocurrency exchanges.

In the fourth stage, Saitama aims to successfully integrate the SaitaMaker, SaitaMask, and the SaitaMarket in its network, which are all under development.

Let’s have a look at the tokenomics of Saitama.

When Saitama was listed on CMC in June of this year, its price was around $0.00000000006. While it was relatively quite low, the price increased to $0.000000003 by the end of July. After that, the price was fluctuating, and it only started increasing at larger rates in September.

The price of SAITAMA had a huge increase in the last few weeks. SAITAMA has recently hit an all-time high at $0.00000075, reaching a market cap of around $33 billion. The circulating supply has not yet been verified by CMC, so it is yet to determine whether this market cap was real or not. If it was real, then SAITAMA temporarily climbed in the top 10 market rankings.

Nonetheless, the price of SAITAMA has dipped ever since. It is currently trading at around $0.0000001.

With this cryptocurrency displaying so much potential for the long run, many of the world’s experts predict that SAITAMA can increase at huge rates in the future. Here is what some of them think about this project:

Wallet Investor forecasts that SAITAMA may initially decline in 2022 after the incredible run that it has had in 2021. However, they predict that SAITAMA can keep increasing in the longer run. An increase of more than 200% is predicted in the long run.

YouTuber Active Investors provides a careful analysis of Saitama and shows the reasons why Saitama may explode in the next few years. He suggests that the burning mechanism can lead to the price of SAITAMA to grow 1000x in just two years. All that needs to happen is for more transactions to occur so that more tokens are burned.

Jamie Tech, another crypto analyst on YouTube, predicts that a big pump on the price of SAITAMA may happen very soon. The biggest reason for this is the potential Binance listing of the SAITAMA token. If that occurs, more people may have access to Saitama and increase its price at large rates. A specific prince prediction is not given but that SAITAMA can have its biggest increase ever very soon.

Because of the extraordinary potential that the Saitama project has, we at Crypto Academy also predict that the price of SAITAMA can increase at large rates in the long run. Considering the fact that SAITAMA is a deflationary token, its price can only keep increasing.

If the hype for Dogecoin-influenced cryptocurrencies remains in the coming weeks, and if BTC maintains its momentum, we could see SAITAMA retest its all-time high and potentially reach a new one. In 2022, SAITAMA may retain its momentum and may reach $0.000001.

By 2023, the SaitaMask, SaitaMaker, and SaitaMarket could be prospering and increasing the value of SAITAMA even more. The price of SAITAMA could be appreciated to $0.00001, considering that more tokens are burned with every transaction.

In 2024, the price of SAITAMA might be relatively stable, and it may even decline below $0.00001 at some stages. Nonetheless, the BTC halving that is planned to occur midway through 2024 can cause another bullish trend by the end of the year. SAITAMA could reach as high as $0.00005.

In the early months of 2025, SAITAMA may continue its run and reach immense heights. The price could reach $0.001 for the first time. This could only be done if the trading volume in the SaitaMask is as high as projected, where 2% of each transaction gets burned.

Lastly, SAITAMA could reach a peak of $0.01 in 2026. With the current supply, such a price would be impossible. However, if the burning mechanism of Saitama can drop the circulating supply as low as 4 trillion, which it technically can if trading volume remains high, a price of $0.01 is attainable. This is also considering the possibility that the total market capitalization of cryptocurrencies reaches new heights, judging by the mass crypto and blockchain adoption that has already started. Saitama remains one of the few projects that actually want to illuminate young people when it comes to investments, so the demand for SAITAMA tokens can grow as more people join the industry. 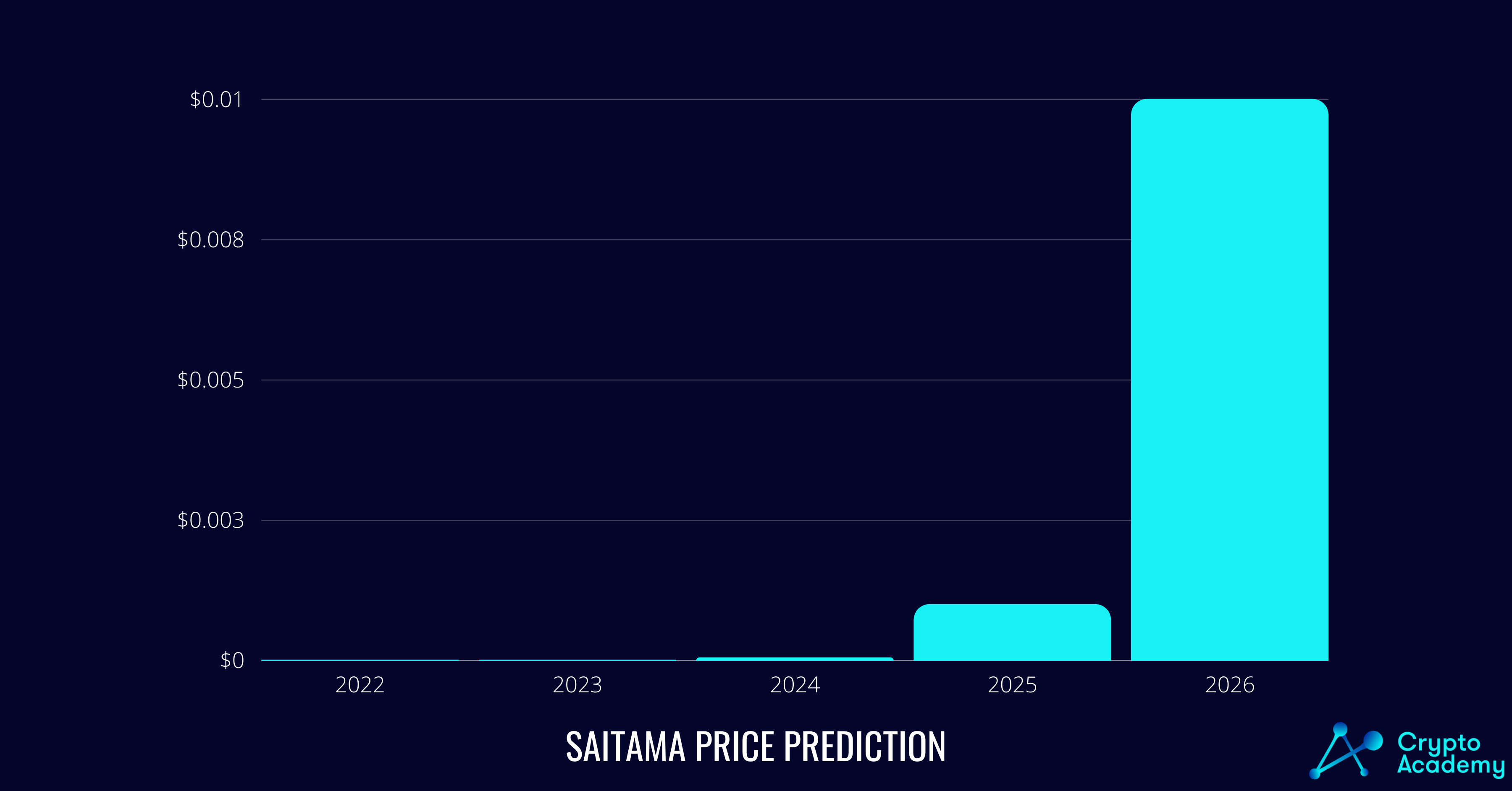 How to Buy Saitama (SAITAMA)?

Since SaitaMask is still under development, you should use a centralized exchange first. You need to create a cryptocurrency exchange account that supports ETH.

Then, you need to fund your account either by transferring them from another wallet or by using a debit or credit card. Then, you can buy ETH.

Once you transfer your ETH to MetaMask, head to UniSwap and connect your wallet with the website. Then, type the contract address of SAITAMA and type the number of tokens you want to buy with your ETH. Lastly, press “SWAP.” You need to leave additional ETH for potential gas fees.

While it is impossible with the current supply for SAITAMA to reach $1, its price can increase at large rates as the supply burns even more. The more transactions, the lower becomes the supply. With SaitaMask being launched soon, SAITAMA could increase massively. A price of $1 is only feasible by 2030.

Will the price of SAITAMA increase?

The price of SAITAMA can increase due to the fundamentals of the project and the deflationary properties that the SAITAMA token has.

Where can I buy Saitama?

To buy SAITAMA, you need to use the MetaMask wallet and connect it with UniSwap. Once SAITAMA is listed in major exchanges and the SaitaMask wallet goes live, buying SAITAMA can become much easier.