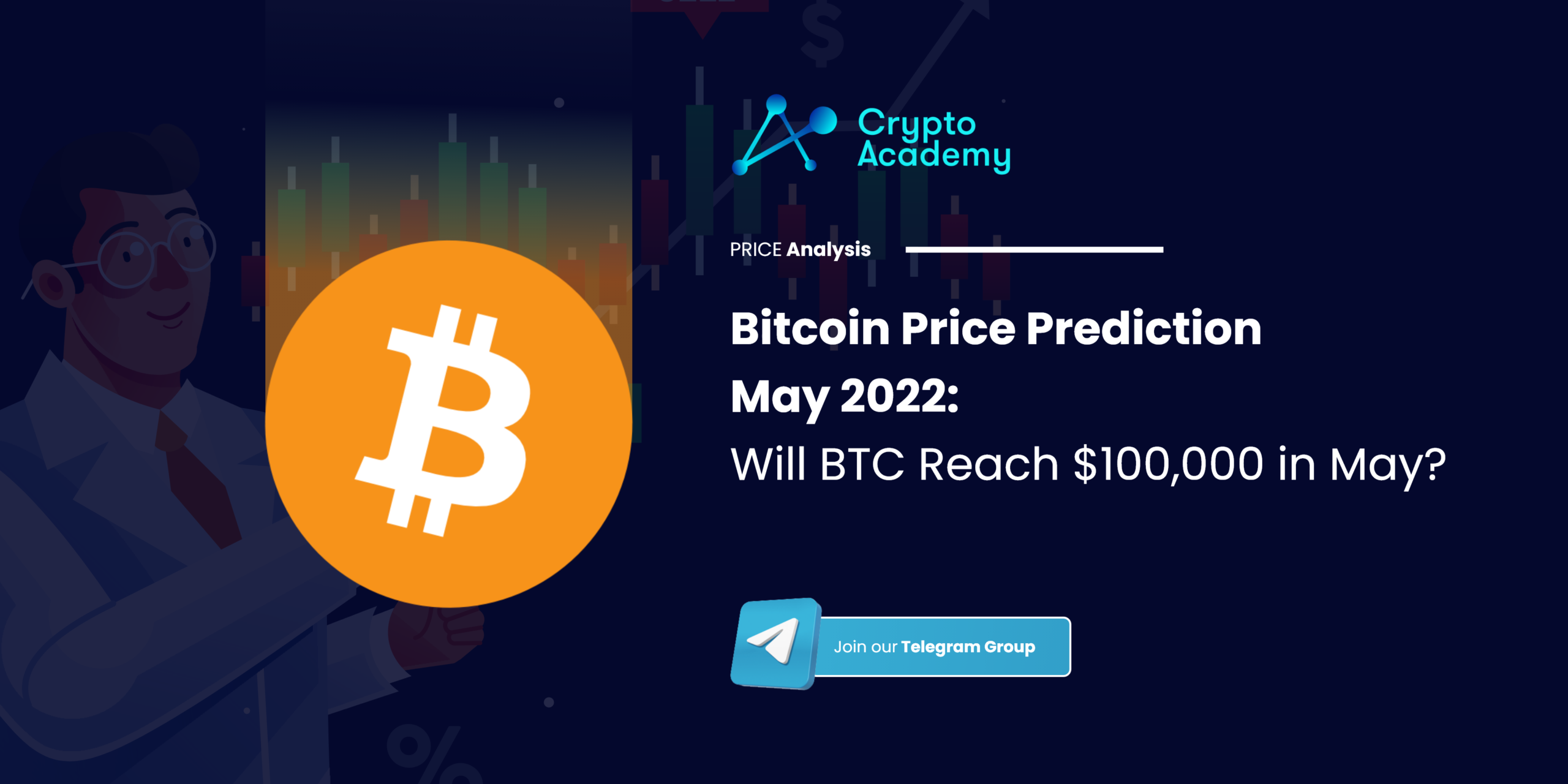 In 2022, BTC maintained that similar approach, where the price declined by an additional 35% in the first few weeks of the year. After finding support at $33,000, the price had a correction. In the following weeks, the price was highly volatile and slightly recovered. BTC managed to increase by almost 40% in the following weeks of the first quarter, but it faced resistance at $48,000. This increase led to BTC becoming overbought in the 1-day chart, hence a retracement was imminent. Nonetheless, that retracement was bigger than anticipated by BTC holders as support at $39,000 was eventually broken.

Because of that, BTC continued to decline in the 1-day chart, and it has declined by more than 18% in the last few days. This decline is relatively large for the crypto market as Bitcoin is the leading cryptocurrency with the largest market capitalization. However, Bitcoin is currently facing support at $33,000, in the previous support structure back in January.

The fear and greed index shows signs of fear in the 1-day chart. Moreover, Bollinger bands show a considerable increase in price volatility and trading volume. On a bullish note, the price is now below the lower band, meaning that we could see the price of BTC have another go upward in the coming days. 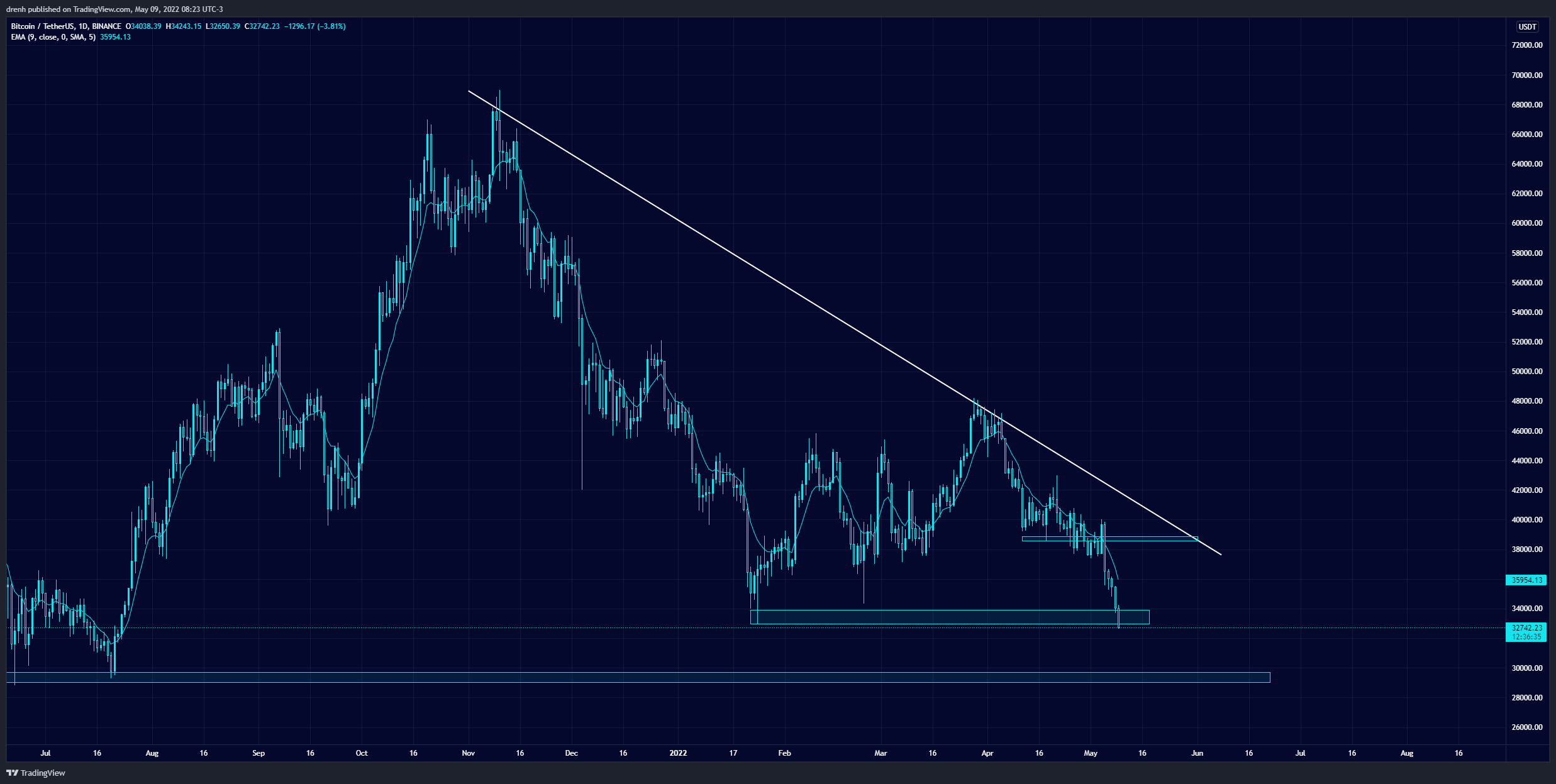 Both the 20-MA and the 50-MA lines of a 1-day chart are currently above the price of BTC, meaning that the current trend is downward for Bitcoin and that the price may decline in the coming day/weeks.

The 9-EMA of a 1-day chart is also above the price of BTC, meaning that BTC is bearish in the shorter run as well. The EMA line may act as resistance if the price attempts a correction in the coming days.

The RSI of a 1-day chart is now below 30, meaning that Bitcoin is oversold. This means that an increase in the price of BTC is likely to happen so that the RSI is close to the equilibrium. 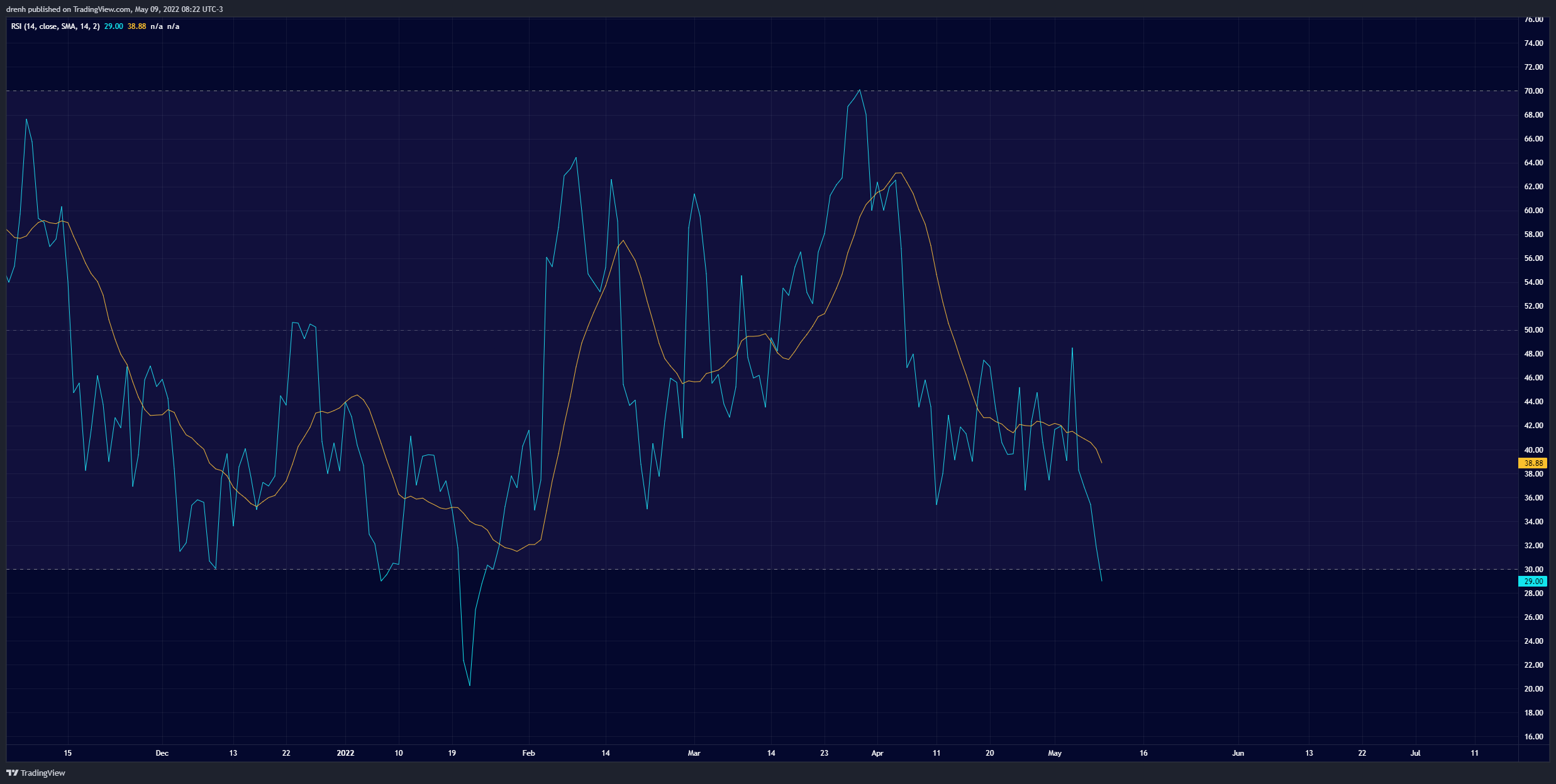 The MACD line of a 1-day chart is below the signal line and below the baseline. This indicates that the current momentum is bearish for BTC and that the price could perhaps keep declining in the short run. Nonetheless, if the loans start converging, considering the current oversold nature, we may eventually see the momentum shift. 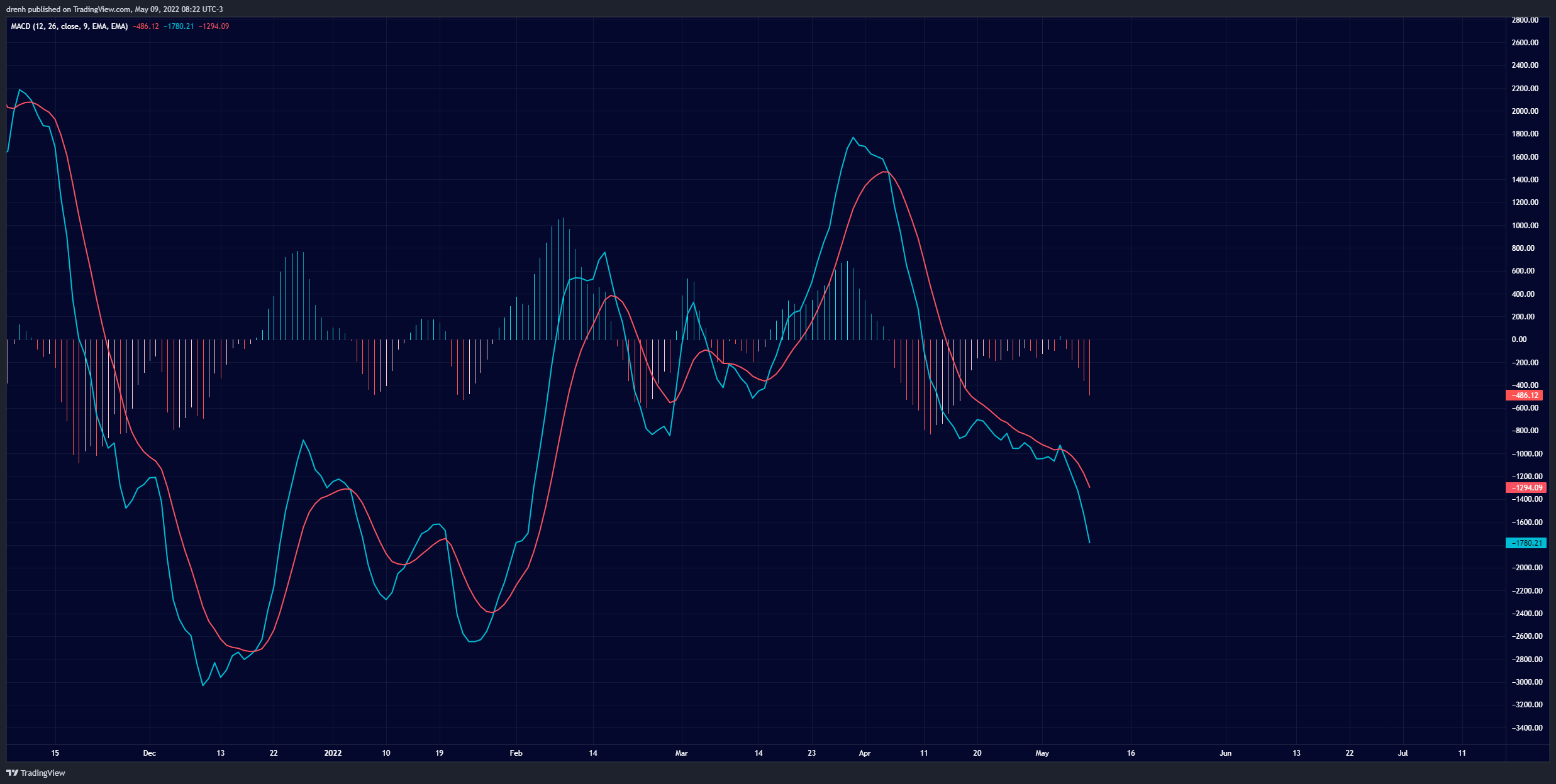 The Fibonacci retracement levels of a 1-day chart show that the price of BTC is likely top retrace in the coming days. If that is the case, then BTC may face strong resistance at the 38.2% level. If that level is not penetrated, then BTC could be looking further downward in the coming weeks. 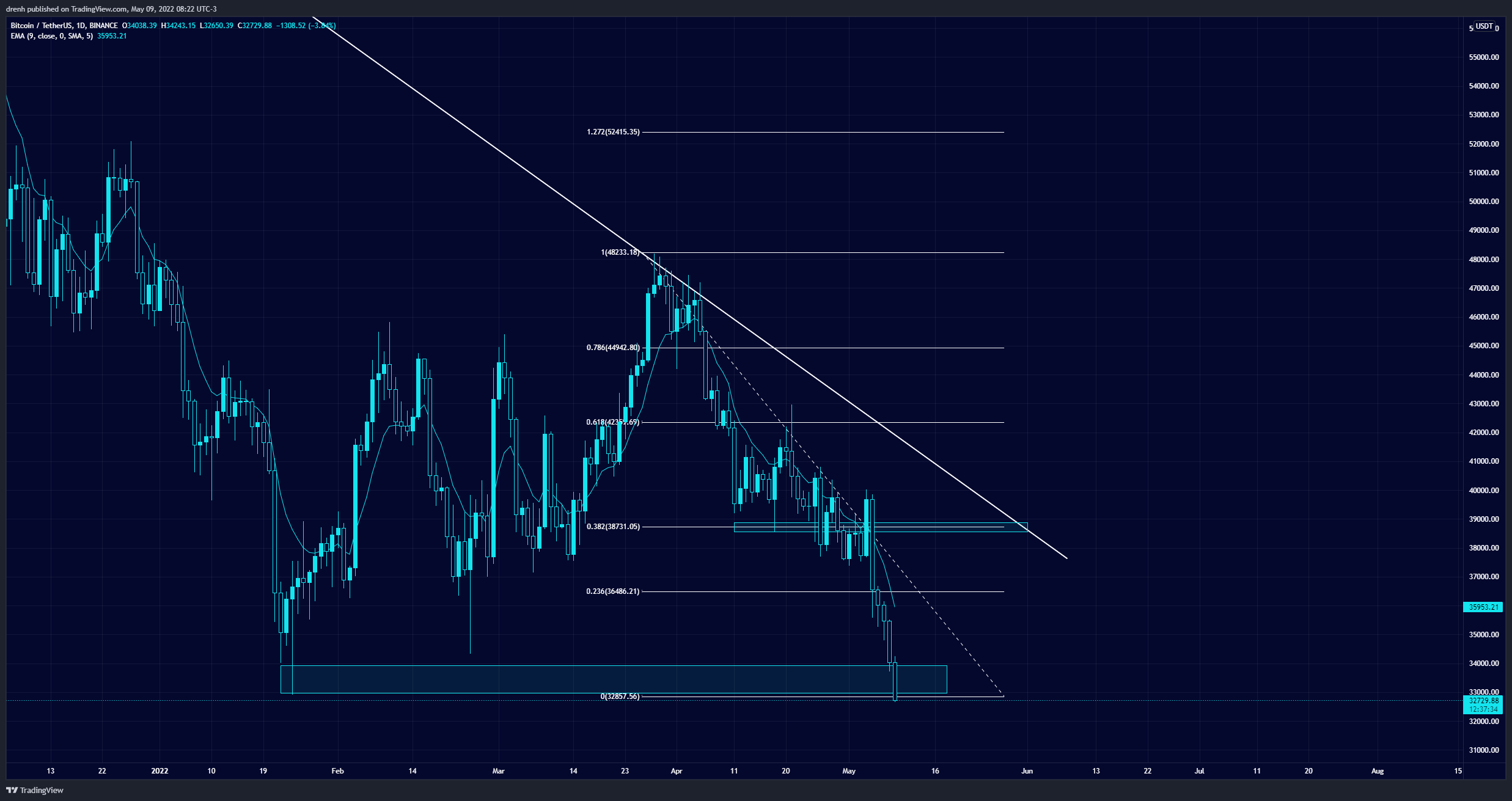 Based on this technical analysis of Bitcoin (BTC), the price of BTC could potentially have another go upward in the coming days if support at $33,000 is strong once again. If BTC manages to go past $40,000, then we may eventually see the trend reverse in the 1-day chart. However, given the bearish nature of technical indicators, BTC could then find support at $29,000 if the current support structure fails. 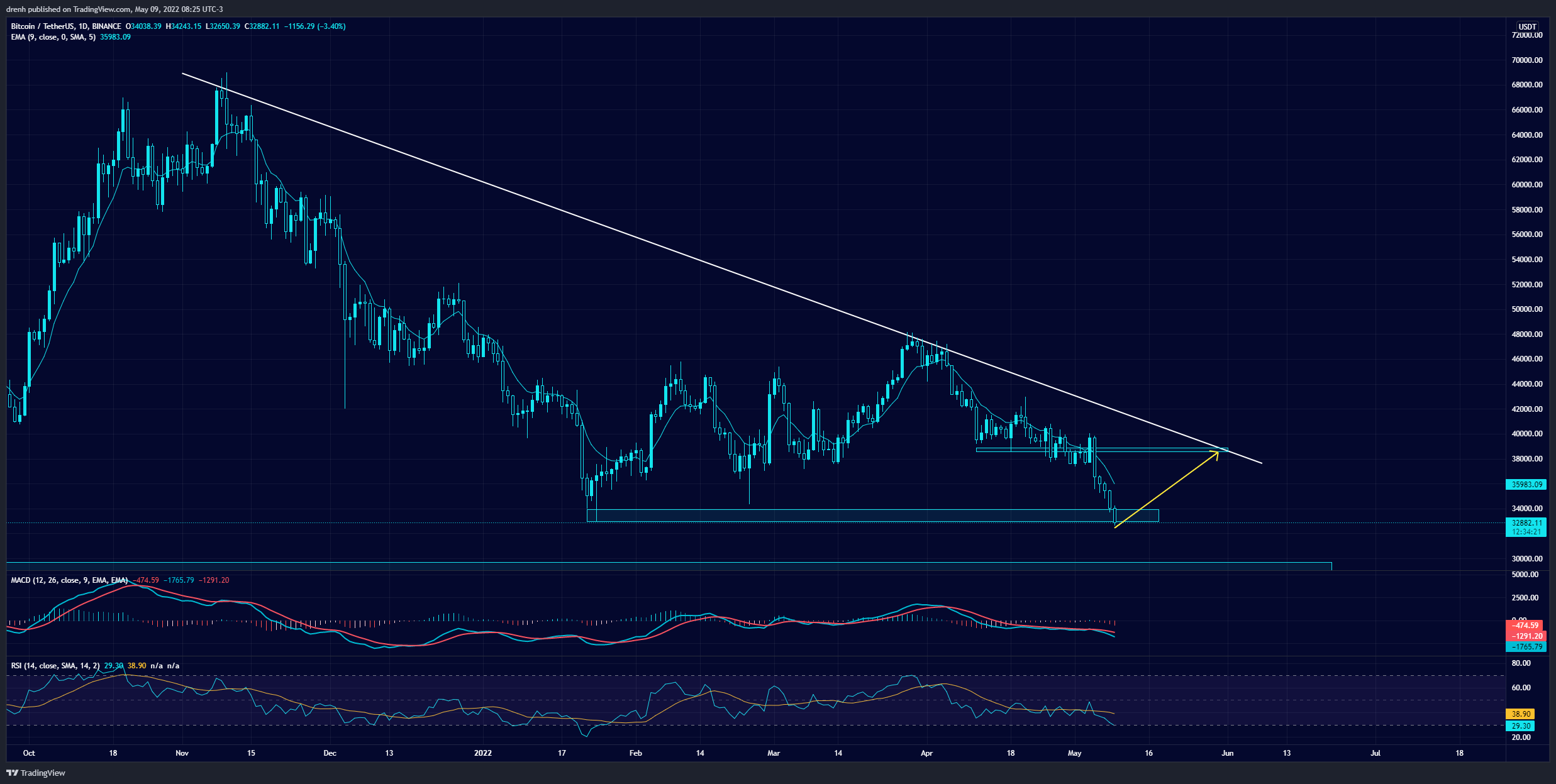 The Federal Open Markets Committee (FOMC) was due to have a meeting on May 4th regarding market volatility. While this may not have a direct impact on Bitcoin, it may have on Bitcoin traders. When looking at history, the last time the Fed made changes regarding rates when the latter were zero was back in 2017. At the same time, that’s when BTC had one of its historical bull runs.

Look at the following thread to see what Gert van Lagen had to say on his Twitter:

What happened last time the FED came up with a lot of subsequent rate hikes after being zero for a long time?$BTC entered the 2017 bullmarket. pic.twitter.com/lmcIoxXrvN

Moreover, BTC is highly dependent on the support that it has from institutional investors. Perhaps one of the biggest proponents of Bitcoin is Michael Saylor and his company, MicroStrategy. The latter has stated that they will do no matter what to keep BTC above $21,000. If that occurs, then it will lead to a margin call for the billion dollars-worth venture. This is because Saylor and his team took a loan to purchase BTC back in August of 2020.

On the other hand, Saylor has tried to keep the situation in a rather fun way. Recently, he tweeted an edited picture of him in a McDonald’s uniform, implying that the market has put him in a position to work on a 9-to-5. All the funny aspects aside, Saylor remains one of the biggest supporters of BTC.

Monday morning is time to get back to work. #Bitcoin pic.twitter.com/JlufLXRT9W