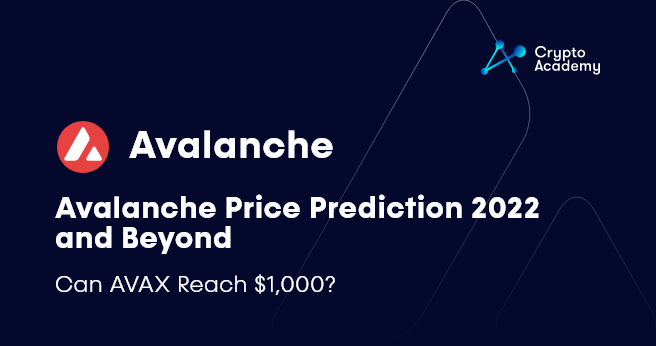 Avalanche provides on-chain governance to let participants vote for the changes in the network for critical network parameters for democratically upgrading. The choice of the majority can also change the parameters, including the mining rate and minimum staking amount. However, all the governance parameters are limited to some time range to let the system stay predictable for the short term. It also creates your private and public blockchains. The system is designed for better support for monetary functions and provides support to simply make and trade complex digital smart assets and custom rulesets.

Avalanche consists of three built-in blockchains. They are named Platform Chain (P-Chain), Contract Chain (C-Chain), and Exchange Chain (X-Chain). The primary network is a unique subnet that secures and validates these three blockchains. Every member of each custom subnet has to be a member of the Primary Network. For doing so, they have to stake a minimum of two thousand AVAX. A team of Cornell computer scientists has developed the system to use an advanced consensus protocol. It is capable of confirming transactions in less than a second, permanently.

Avalanche is also capable of 4,500 transactions per second, which is an order of magnitude greater than present blockchains, making it more scalable. The flexible system easily makes custom blockchains and decentralized apps containing almost any arbitrary logic. Its security is ensured due to the stronger security guarantees, that is, quite more than 51% of the standards of other networks. Instead of proof-of-work, it uses the energy-efficient proof-of-stake consensus algorithm. It also supports the establishment of smart solidity contracts and the most liked Ethereum tools, including Remix, Metamask, and Truffle.

AVAX uses a proof-of-stake mechanism instead of the proof-of-work mechanism. This means that you can stake it but can not mine it. Sunny King and Scott Nadal of Peercoin first introduced the staking mechanism, which locks up the tokens for supporting a network and gives rewards to the stakers. A decentralized network avoids Sybil attacks for the need of network influence, paid using a scarce resource. It simply makes it extremely difficult for an attacker to attempt to compromise the security of the network.

Avalanche’s native token, AVAX, is the scarce resource for its proof-of-work systems as this resource is the computing power. Hence, a node must stake AVAX to validate a blockchain on Avalanche. Avalanche’s ecosystem conducts some sub-sampled voting in the sample. A small and random subset of validators gives an opinion regarding the acceptance and rejection of transactions whenever a validator has to determine the prevalence of a transaction. In the typical situations when there is no conflict in a transaction, it finalizes in a very small portion of time.

AVAX, the native token of Avalanche, is a scarce and hard-capped asset. It is the tool for paying the fees. It also secures the platform by staking and also provides a basic unit of Avalanche’s account between the multiple subnets. All the fees on Avalanche can only be paid in the native token, and hence, it is necessary to interact with the Avalanche network. Some AVAX tokens are also needed for moving or swapping your assets using the Avalanche Bridge. This bridge gives an AVAX airdrop to users to transfer more than a particular worth of assets to the blockchain. So, you need to get it from exchanges or through a credit card purchase on Pangolin.

Avalanche has fulfilled its already established roadmap, and they have not announced further upgrades yet. We have mentioned below the important upgrades it has already implemented.

May 2020: Avalanche’s declared its second public testnet called Denali. It also made its users run a testnet node and gave 2,000 AVAX tokens to participants. They planned an event to distribute two million tokens to its contributors.

August 2020: Avalanche network made its fully-featured version, Everest, to act as the last stage of testing prior to the launch of Avalanche’s mainnet. It further supported the network fees, more developed smart contract utility, and NFT contracts.

September 2020: The Avalanche mainnet was launched on 21th of September, which comprised the release of its three Avalanche chains (the P, X, and C chains). At the launch of these chains, the network gave maximum support to the compatibility of EVM (Ethereum Virtual Machine) and development toolkit by using an EVM implementation, Avalanche Contract Chain (or C-Chain).

We have predicted the price through our analysis of its price and fundamental analysis. However, it is impossible to predict the future price accurately.

Avalanche is trying to form an ecosystem that can interact and share data and information to maintain its security, scalability, and functionality. Due to the lack of potential dangers or bearish trends in the future of cryptocurrency markets, AVAX’s price can have a good future too. The minimum price till the end of 2022 can be $90, the average price can be $95, and the maximum price can be $100.

AVAX has been increasing continuously since the time it touched its all-time high price. Although token has performed relatively well, it still has many aspects to be improved. Avalanche has developed a fast and reliable network that takes care of the product’s user experience. All these evolutions in the system stimulate a bullish trend in the AVAX coin’s price, and it can reach as high as $130, with an average price of $125. If the demand for crypto under unpredictable circumstances becomes low, the minimum price can be $120.

Avalanche being a blockchain, has performed very well, and there have been a lot of positive price predictions by their analysis of historical data and technical research. This year, the minimum price can even exceed $128. The security and scalability features it provides will further promote AVAX, making its maximum price to be $135 and the average price $132.

Avalanche has proved itself to be the best blockchain for being decentralized and still scalable. The blockchain has an unlimited level of interoperability among different chains and many validators that ensure its speed and decentralization. It has the least obstructions and maximum affordability for adopters. Avalanche coin is involved in community projects and web developments. If they continue their present growth, they can gain a high volume, market cap, and educational and innovational industry. Hence, its maximum price can be $240, and the minimum price can be $140, with an average of $190.

As the blockchain provides easy interaction and collaboration between multiple chains, has high blockchain adoption, thousands of subnets, it creates a diverse network. Due to its completely decentralized system and high throughput, Avalanche can have a minimum price of $160, an average price of $250, and a maximum price of $320. 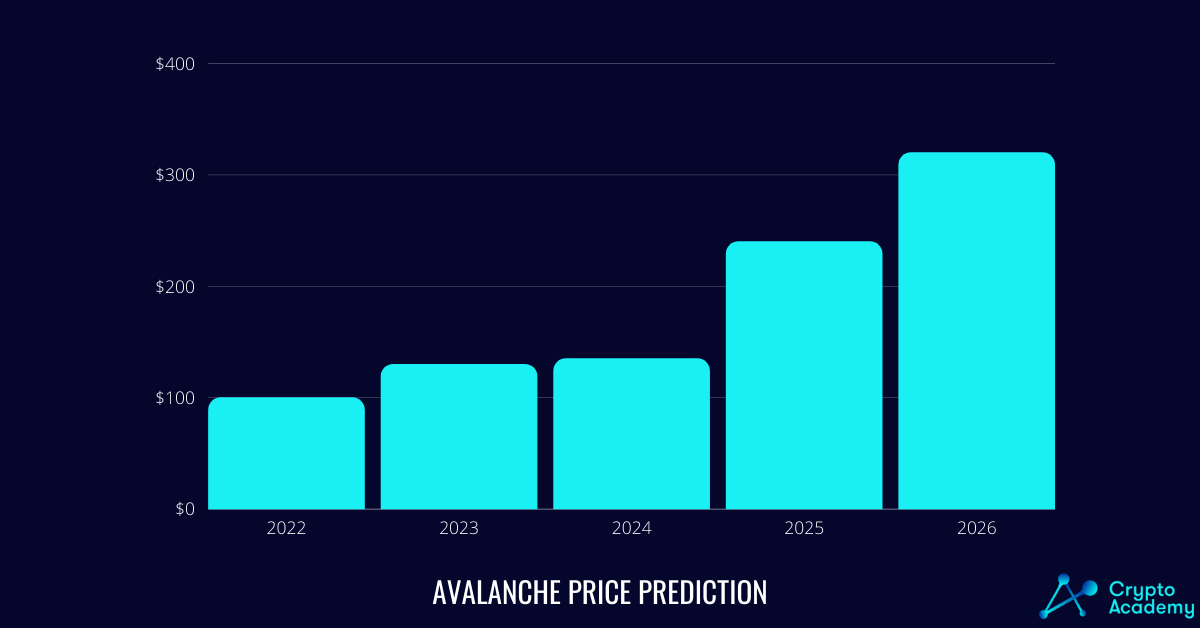 We have gone through several crypto experts and relevant websites for their price predictions about Avalanche. Following are some of the predictions given by popular platforms.

This platform has also predicted the worth of Avalanche to elevate, and a maximum AVAX price level can be $134.27 at the end of 2022. They also predicted an average trading price of $118.25 until 2022. Their estimation of price with their five-year plan has indicated the coin value to reach the 537.27 mark. As Avalanche’s price has a great capability to touch new heights, their special experts and analysts related to business predict its highest price to be around $3,691.29 by 2030.

They have predicted a bullish price trend for Avalanche (AVAX) and are estimating its price to be $120 by the middle of 2022 It will continue its surge to $127, which is an increase of about 6% the end of the year. Their AVAX price prediction shows that AVAX price can effortlessly touch $268 by the year 2026, and the minimum price can be approximately $250.

How to buy Avalanche

You can use Avalanche for fiat money using Coinbase. Other exchanges used for buying it are Binance, Upbit, OKX, BTCEX, and CoinTiger.

First of all, head towards the official Coinbase or download the Coinbase app and start the signup process. For a transaction, you have to be ready with a valid ID and proof of address. The platform will ask you to verify your identity, which will take some minutes, depending on the region you live.

Click on the payment method box and choose a payment method, among a bank account, debit card, or a wire. Some places offer different speeds and transaction fees with different ways of payment. So you can prefer one of them, according to your location and preferences.

Step 3: Fill in the Requirements

Press the button with forwarding and backward arrows and then select “Buy” from the list of options. In the search bar, type Avalanche and tap on ‘Avalanche’ to open up the purchase screen. On the purchase screen, fill in the amount of fiat currency you want to use through the number pad. The platform manually converts the amount into the expected amount of Avalanche after the trade.

Is AVAX a good investment?

Where to buy AVAX?

You can buy AVAX tokens from Binance, Upbit, OKX, BTCEX, and CoinTiger.