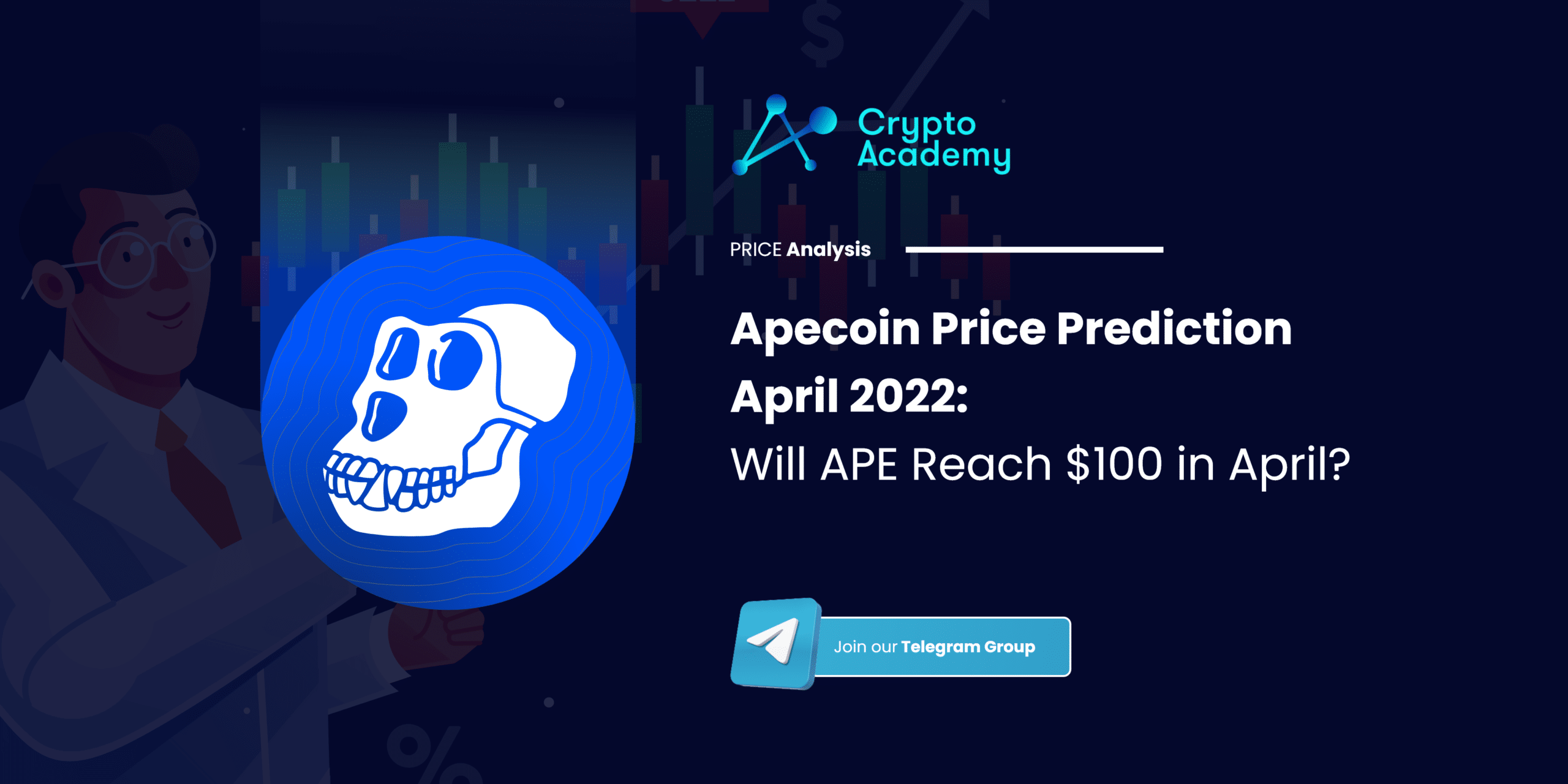 ApeCoin (APE) was one of the most anticipated cryptocurrencies in 2022. The moment it launched, the price of ApeCoin (APE) skyrocketed to a high of $34. After that huge increase within a day, there was high selling pressure due to the incredible gains that the majority of early investors got.

In the 4-hour chart, APE saw strong resistance slightly above $15, and then it went as low as $10.60, where it found support numerous times within a few days. After that, the price had a correction of around 30%, hinting at a possible reversal, but the price failed to break the upper trendline at around $13.

After another dip in the price of almost 20%, APE found support yet again at the lower trendline. Moreover, the recent price movement in the 4-hour chart for the last few weeks has created a narrowing wedge pattern, indicating that the price may have a breakout as the wedge gets narrower.

The fear and greed indicator is relatively stable, but the overall market is still largely dominated by fear, primarily due to the ongoing tensions between Russia and Ukraine. 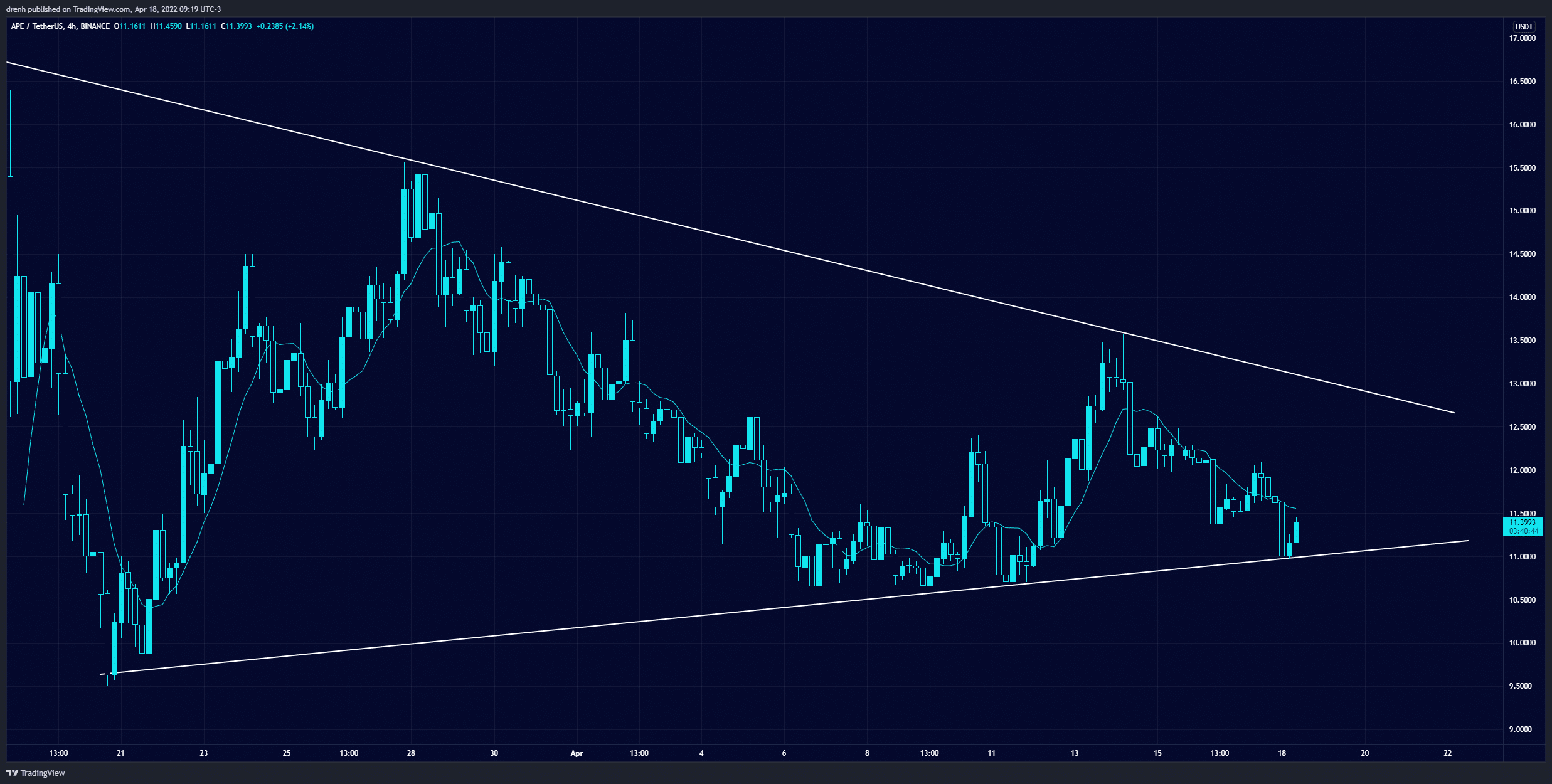 Both the 20-MA and the 50-MA lines of a 4-hour chart are currently above the price of ApeCoin (APE). These moving averages indicate that the trend continues to be bearish in the medium-term for APE.

The 9-EMA of a 4-hour chart is also above the current price of APE, meaning that the price may decline in the shorter run as well. Moreover, the EMA line may act as resistance to the price if the latter attempts a correction in the coming hours.

The RSI of a 4-hour chart is currently below the equilibrium, meaning that the overall price is bearish for APE in the short run. Nevertheless, a continuation of this manner may make APE oversold, which could then lead to a trend reversal. 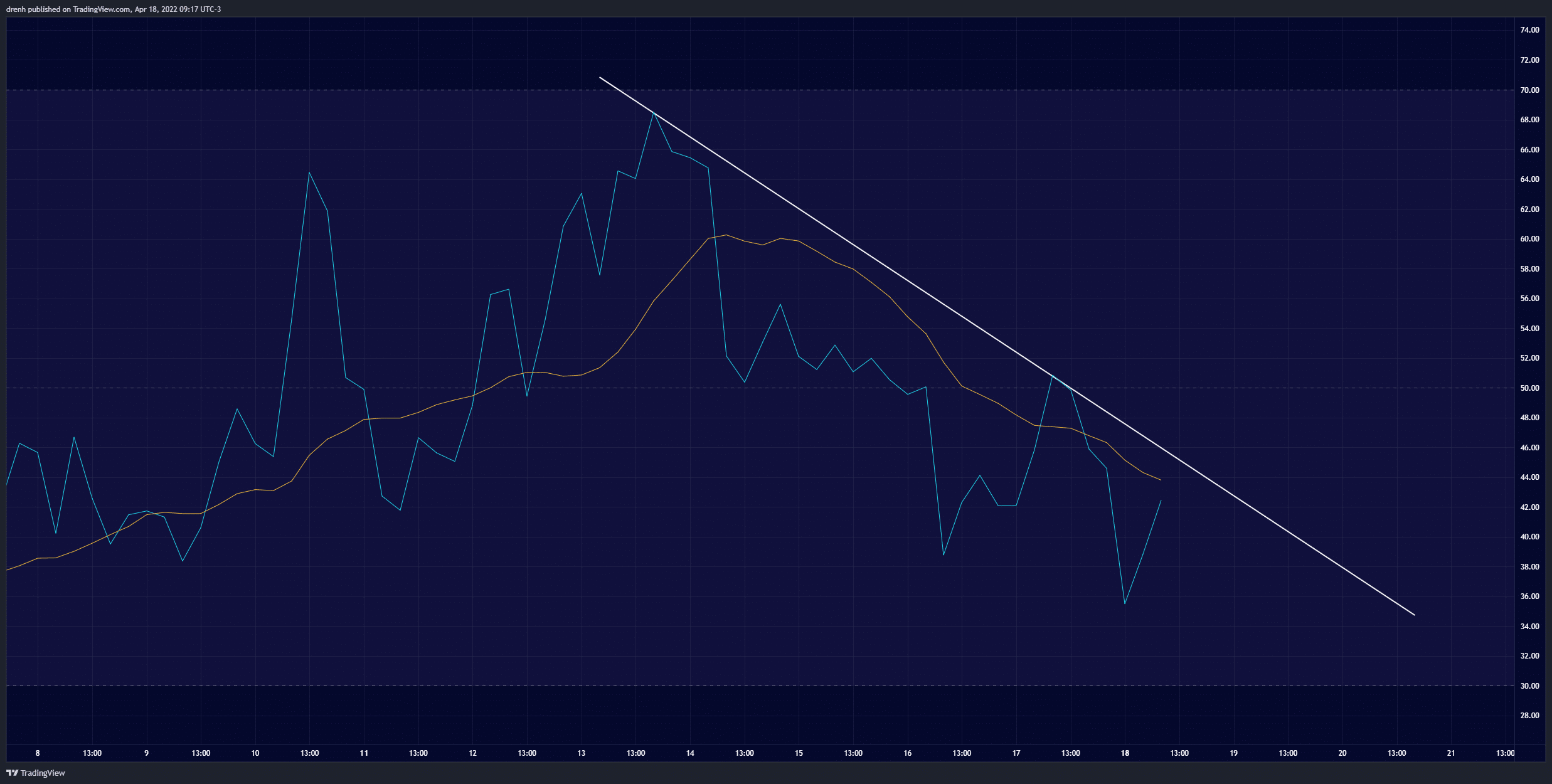 The MACD line of a 4-hour chart is currently below the signal line and below the baseline, meaning that the momentum is currently bearish in the short run. This could see the price of APE to keep declining. 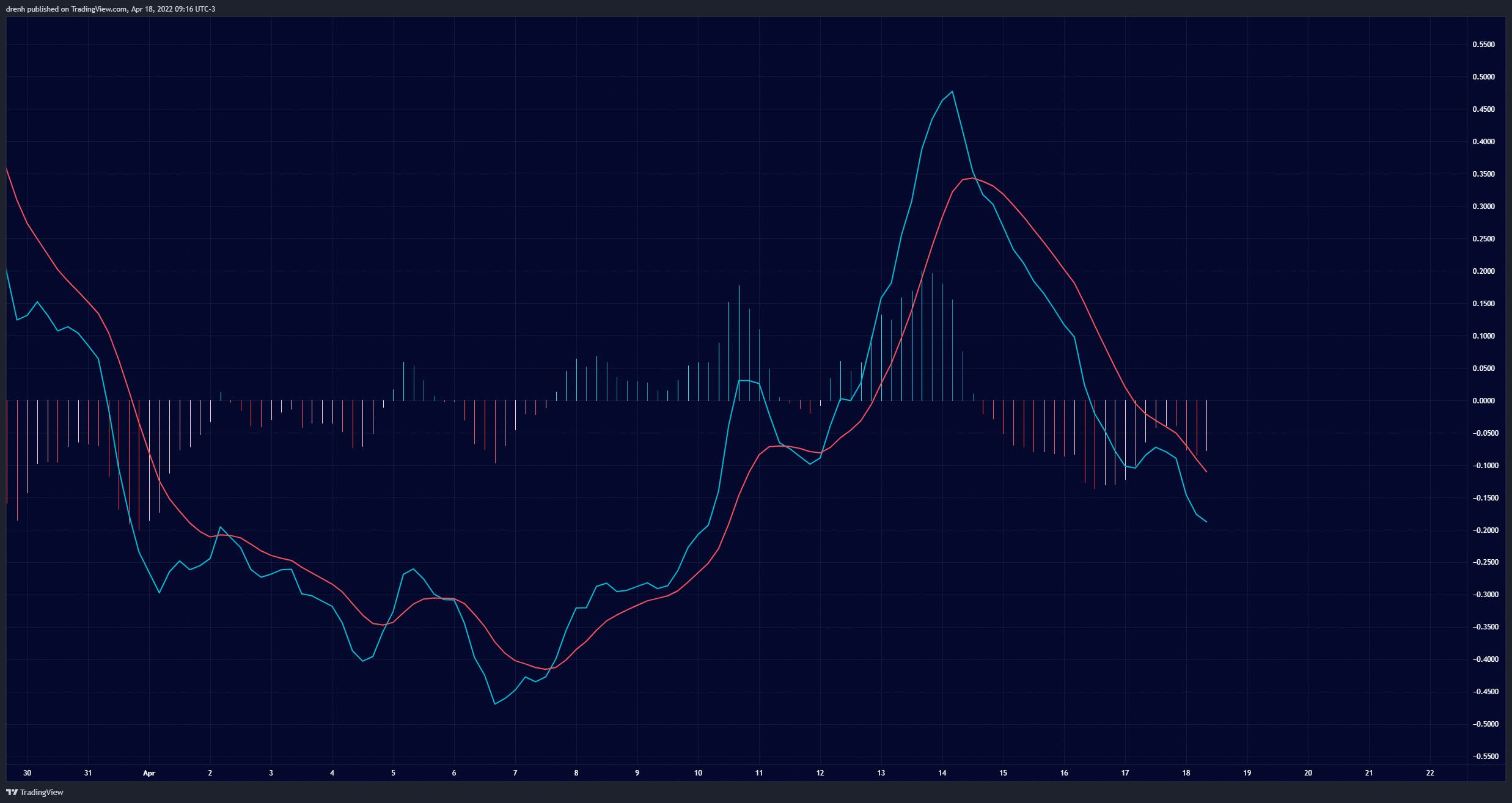 The Fibonacci retracement levels of a 4-hour chart suggest that the price may correct in the short run, but it may face strong resistance at both the 38.2% and 61.8% levels. If APE fails to break these levels, then we may see a continuation of this downtrend in the coming days. 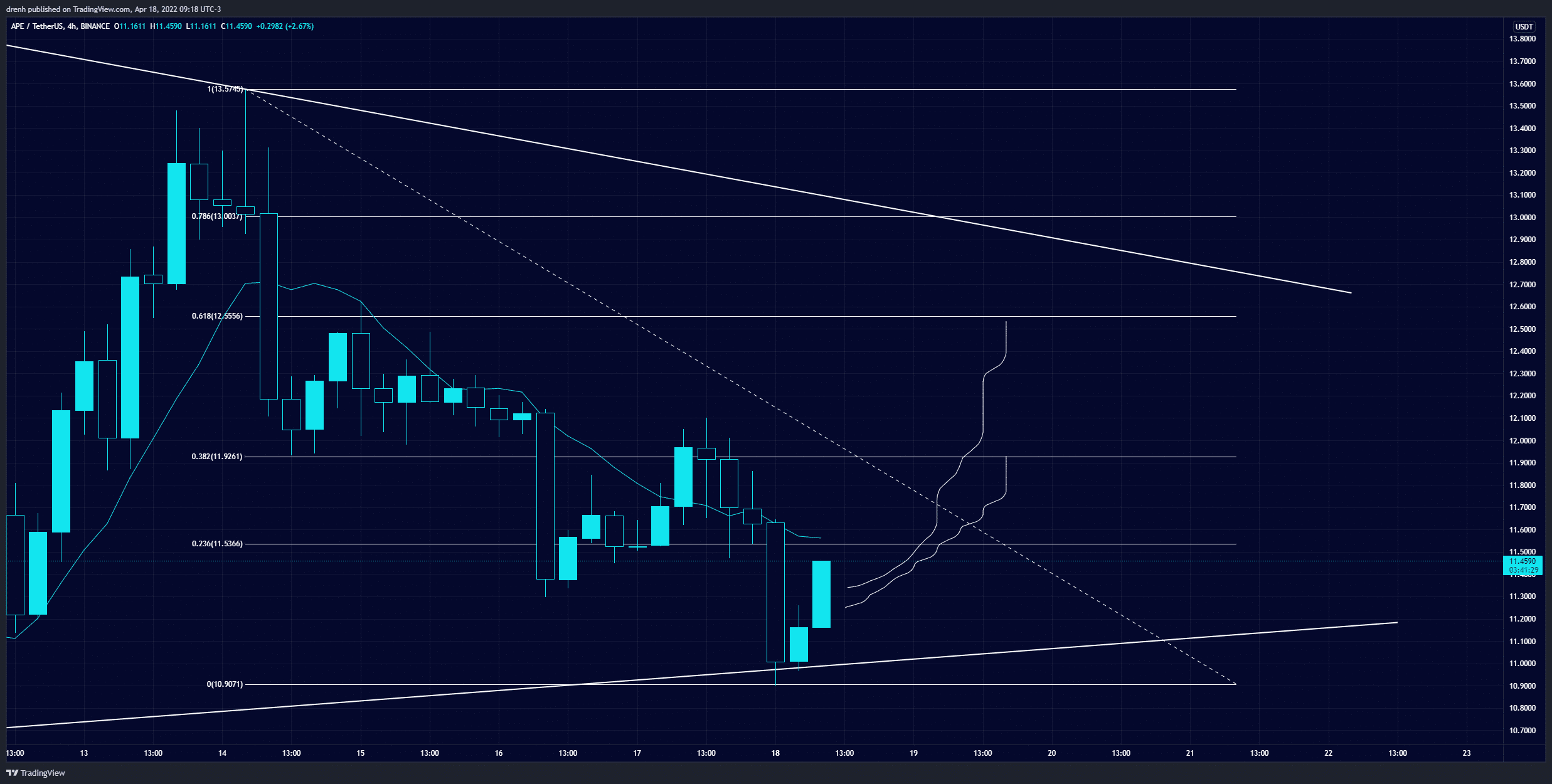 Based on this technical analysis on ApeCoin (APE), we may see the price of APE slightly rebound in the coming days, with the price facing strong support at $13. If APE manages to break that level, then the overall trend may reverse. Consequently, the price of APE may continue to rise in the coming weeks. If not, then we could see APE continue following the same movement throughout the narrowing wedge pattern in the 4-hour chart. All in all, the price of APE is largely influenced by the overall state of the market. Hence, if the likes of BTC manage to have another surge in the price, there’s no reason why APE cannot have another go at $50. A price of $100, however, is only attainable in the longer run.

While technical indicators may not suggest bullish tendencies in the price of APE, fundamental indicators say otherwise. ApeCoin is currently working on launching its own metaverse, named the Otherside. APE tokens and BAYC NFTs power this Metaverse. The launch is one of the highest anticipated metaverse-related projects, which could see the price of APE have another surge in the price once it launches.

See you on the Otherside in April. Powered by @apecoin pic.twitter.com/1cnSk1CjXS

In other news, ApeCoin can now be used for payments on large shopping websites, thanks to its partnership with Shopping.io. APE holders can now use the token for Amazon, eBay, Walmart, and Home Depot payments. This suggests that APE is continuously being integrated by large businesses as a means of payment.

🦧 The $APE has spoken!
Use $APE for purchases on Amazon, eBay, Walmart and HomeDepot through https://t.co/WAhDgOT5KJ and enjoy a 2% OFF!🍌@yugalabs @BoredApeYC @apecoin pic.twitter.com/9kqjmHmhMM

On another bullish note, YugaLabs, the creators of BAYC and ApeCoin, is working with Coinbase to launch a three-part film. This film may probably relate to the Otherside metaverse. BAYC owners can participate in the series by submitting their Bored Ape, which could then be featured in the films.