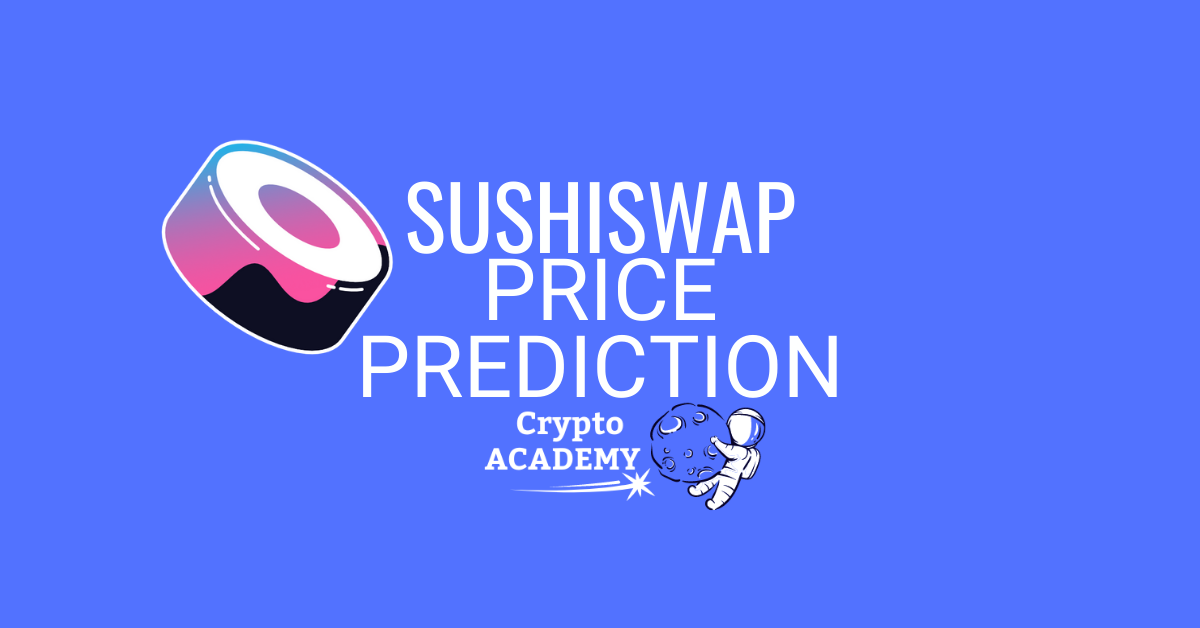 The last decade was a rollercoaster for cryptocurrencies. There were thousands of new coins introduced to the market. One of these coins is SushiSwap which first started its journey in 2020. Being a fork of Uniswap (UNI), SushiSwap had the attention of many from the beginning. However, attention does not necessarily mean price increase since there are many other factors that come into play when it comes to the price of a coin. Will SUSHI be able to outperform its competitors? Will its price increase? Let us first begin by explaining what SUSHI is, what value it holds, and how it can be affected by external and internal factors.

What is SushiSwap (SUSHI)?

To begin with, SushiSwap was created by a pseudonymous group or individual (still unknown) named Chef Nomi, along with co-founders sushiswap and 0xMaki. SushiSwap was started as a fork of Uniswap (UNI), aiming to build a better platform by adding additional features not previously on UNI. SushiSwap runs on the Ethereum (ETH) network and seeks to stimulate a network of users to run a platform in which they can buy/sell their crypto – basically serving as a Decentralised Exchange. Similar to most P2P exchanges, SushiSwap utilizes a collection of liquidity pools to achieve its aim. When SushiSwap first launched, it caught the attention of many since it marketed itself as the evolved part of UniSwap, with features that aimed to enhance the design of the protocol and were supposed to bring more benefits to LPs and users of UniSwap.

How Does SushiSwap Work?

In order to achieve what it seeks, SushiSwap relies on so-called Automated Market Makers (AMMs) also known as Smart Contracts; users first lock-up assets into these smart contracts, then traders buy and sell cryptocurrencies from those pools, swapping out one token for another. This process provides a way of trading without the need for a central operator administrator, which is a necessity in traditional trading systems. Additionally, this makes every trade more time and cost-effective.

At the time of writing, SUSHI is sitting at a price of $17.48. It has a trading volume of $1.7 billion and a market capitalization of $2.2 billion, which ranks it at number 64 in the crypto market – 50 ranks lower than its main competitor Uniswap (UNI). Now, let us proceed and talk about the future of SushiSwap.

According to many experts and researchers of this field, SushiSwap could face steady growth during the next few years; with some falls and dips, however. GovCapital predicts that the token could jump between a low of $10 and a high of $19.79 by June 2021. Afterward, as per GovCapital, the price of SUSHI may continue to steadily increase, leaving the year 2021 with a price of $36.78, with a 110% increase on its price. Immediately, at the beginning of 2022, GovCapital predicts a huge dip in the price of the coin, putting it at a price of $3.62. 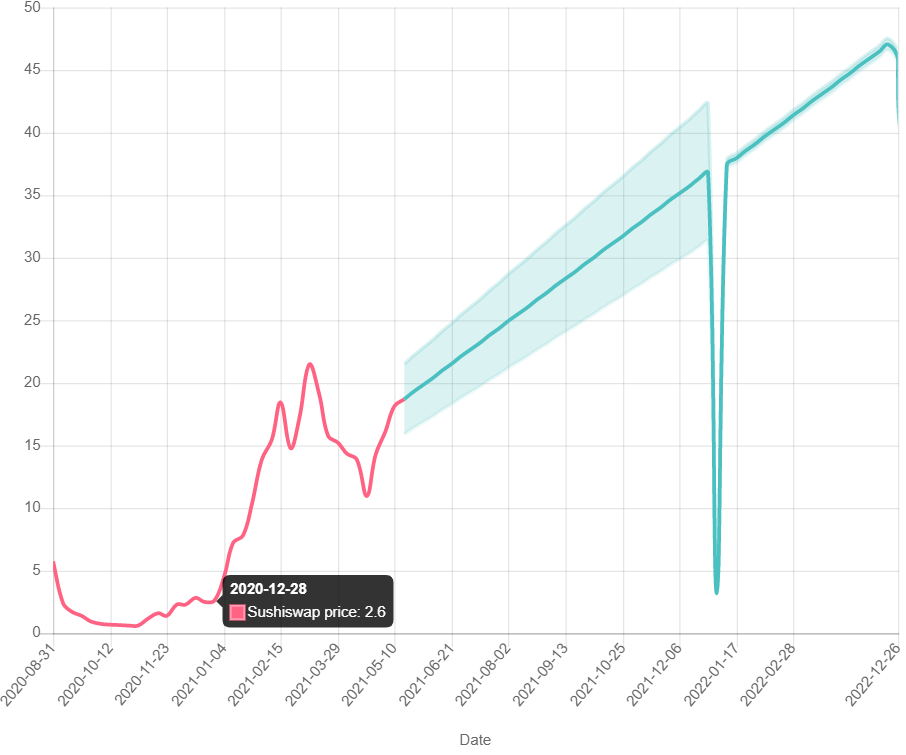 Since the price of SUSHI has been high for a while now, it is expected to have somewhat of a fall soon; and that is exactly what these predictions indicate. However, the fall could serve as a boost for the coin since more and more people will be encouraged to buy the dip.

The next 5 years look interesting for SUSHI coins, with huge drops and increases. For 2022, Longforecast predicts that the coin might sit somewhere between $24.40 and 35.76 throughout the whole year. 2023 seems a little more unstable for SUSHI, where the lowest the coin is predicted to drop is $21.70 and the highest price during the year might be $42.34. While as per Longforecast, 2024 could be nearly exactly the same as 2022 when it comes to the price and market capitalization, 2025 might be the year that SUSHI breaks its all-time high with a price of around $58.50, seeing a 234% increase on its price. 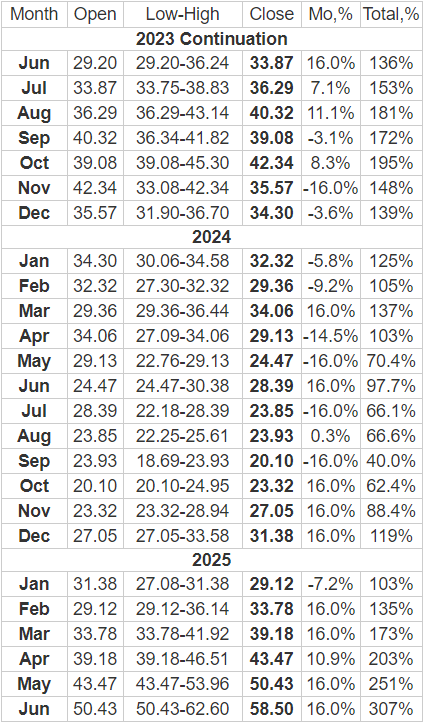 On the other hand, GovCapital predicts that in the next five years, SUSHI could see an increase of 858%, giving it a price of $163.7 per token. They portray a smooth increase and growth in the price of the SUSHI token, with small dips and huge increases on its price. Therefore, according to their analysis, investing in SushiSwap (SUSHI) will most likely be very beneficial for the investor.

What Potential Factors Can Affect the Price of SushiSwap (SUSHI)?

SUSHI has a max supply of 250 million and a total supply of around 219 million, according to Coinmarketcap. However, only 51% of this supply is currently circulating, meaning that only 127 million coins are in circulation right now. The supply of SUSHI will help it grow in price since it is relatively low when compared to many other cryptocurrencies. The lower the supply, the more the impact of the investments made on that particular crypto. Theoretically speaking, if SUSHI had the market cap of Dogecoin (DOGE) – a coin that is worth $0.40 at the moment – SUSHI would be sitting around at a price of $409. Another comparison would be the supply of SUSHI and ETH. The supply of SUSHI is two times that of Ethereum (ETH), and Ethereum is sitting at a price of $3827 per coin right now, giving a better idea of how beneficial it is for a coin to have a lower supply.

What distinguishes SushiSwap (SUSHI) in the crypto market is its usefulness. The SUSHI token is considered to serve many functions, all of which narrow down to one main value proposition and that is protocol ownership. Just as in every exchange, the SushiSwap protocol has a provision of 0.3%; 0.25% is sent to liquidity providers while the remaining 0.05% is converted into SUSHI and then distributed to SUSHI token holders as a reward amount for holding. Additionally, the holders of SUSHI are allowed to vote on governance proposals regarding changes in the protocol, using the SUSHI they own. However, as mentioned before, the primary function of SushiSwap is to facilitate cryptocurrency trading in a decentralized manner.

Another factor that might, at some point in time, affect the price of SUSHI is its competitors. As mentioned before, SushiSwap (SUSHI) is a fork of UniSwap (UNI), meaning that it is not one of a kind or the first of its kind; however, that does not mean that it is the best of its kind. The ups and downs of other DEXs may have an impact on SushiSwap as well. This has been seen to happen during the last bull-run, where both the prices of SUSHI and UNI grew hugely.

Where to Buy SushiSwap?

SushiSwap (SUSHI) has become a popular coin throughout the last months. As of right now, SUSHI is listed in Binance, Huobi Global, OKEx, FTX, and CoinTiger; it also partnered with big names in the crypto industry like AAVE and Yearn Finance. Being listed in many global crypto exchanges gave SUSHI the element of credibility in the eyes of users – an important element for a cryptocurrency to have. Being one of the biggest cryptocurrency exchanges at the time of writing, Binance may be the best option to buy SUSHI tokens.

Where do You Store SUSHI Tokens?

As mentioned before, there are cold wallets and hot wallets in which you can store all kinds of crypto. If you want to invest small amounts of money into SUSHI, the most time and cost-efficient way to store your SUSHI would be storing them into the wallets that exchanges provide you with. However, if you want to invest more in the above-mentioned token, cold wallets like Ledger may be the safest option out there. Unlike Dogecoin (DOGE) or many other cryptocurrencies, SUSHI does not offer native wallets where you can store its native tokens.

Can You Stake SUSHI?

Staking is more or less similar to mining, however, staking does not require miners since it does not use Proof-of-Work to validate transactions. The process of staking is known as Proof-of-Stake, which enables you to earn rewards in crypto when buying and holding an amount of a specific cryptocurrency. When it comes to SUSHI, you can stake it on its own platform SushiSwap through SushiBar. All you have to do is go to their website (app.sushi.com), locate SushiBar (app.sushi.com/sushibar), and enter the amount of SUSHI you want to stake – a process that will turn your SUSHI tokens into xSUSHI tokens.

SushiSwap (SUSHI) has proved itself as a serious and credible project so far. Having founders whose identities are not known, the credibility and safety of using and holding the coin were always taken into question; however, SUSHI still continued to grow and be beneficial for the ones using it. More recently, the ownership of the coin was passed to Sam Bankman-Fried, a 29-year-old crypto billionaire. This might prove as a fruitful change for the path of SUSHI because of the attention that the mainstream media will give it – and this attention is known to boost the price of crypto coins.

Is SushiSwap (SUSHI) a Good Investment?

In general, SushiSwap (SUSHI) has proven itself a good investment until today. Even without the attention of mainstream media, SUSHI has seen huge gains throughout the last months, breaking records and fueling the crypto market. Investing in SUSHI at the beginning of 2021 would leave you with an x10 investment today. Acknowledging the fact that Decentralized Exchanges are a thing of the future, SushiSwap’s time has not come yet; however, the journey of this coin will most probably leave you with gains along the way.

NEM (XEM) Price Prediction 2021 and Beyond – Is XEM a Good Investment?