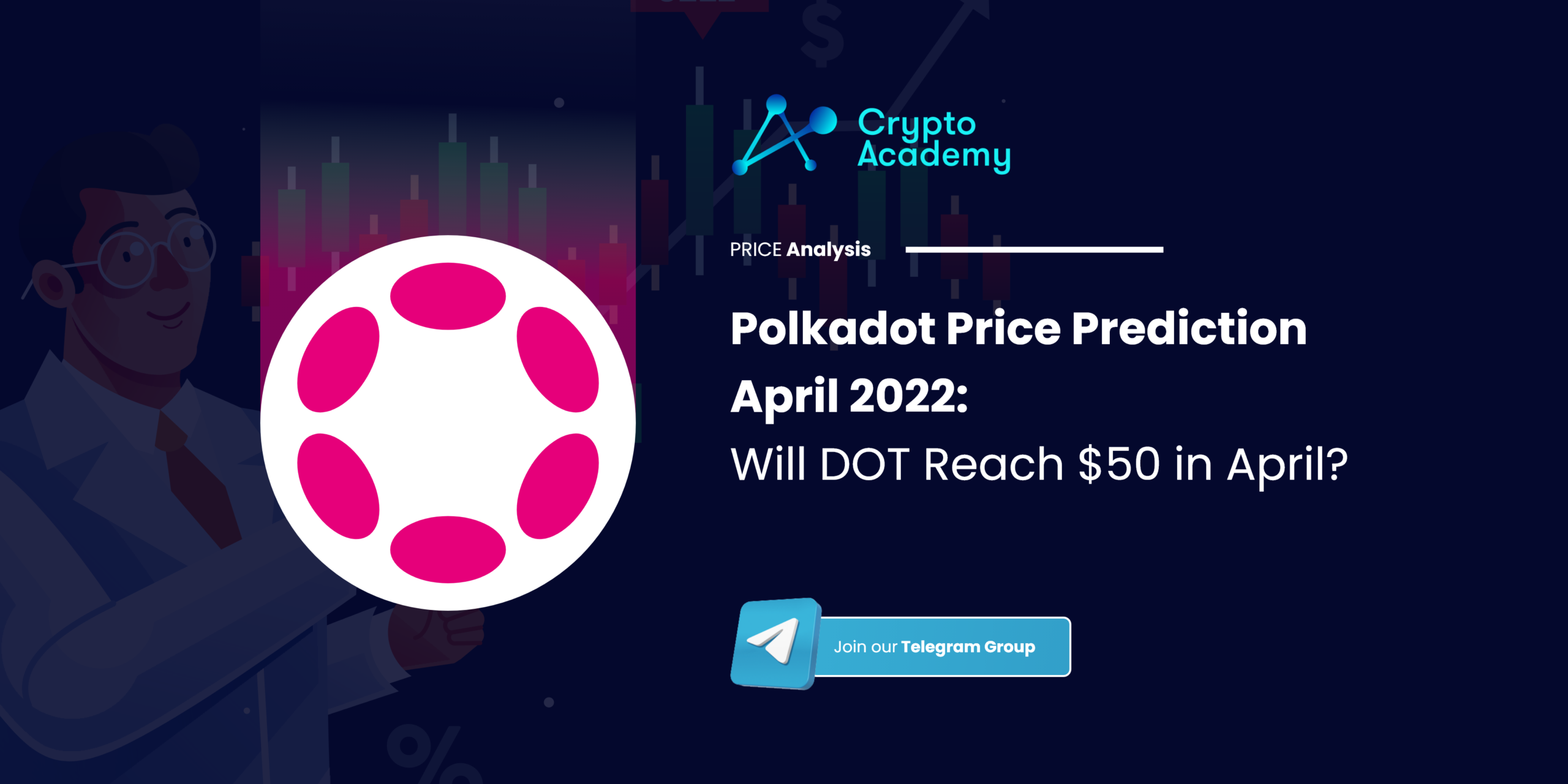 Polkadot (DOT) started the year on a bearish note, with the price declining by around 30% and stopping at $22. After that, the price rebounded and increased by an additional 25%. Nonetheless, after facing resistance at $28, DOT had another surge downward of more than 40%, finding support at $15. After the price went slightly above $20 once again, the price continued to decline in the first few weeks of February.

DOT found support at $14 midway through February, which was the turning point for DOT in the 4-hour chart. The price managed to grow by 40% in the last week of February and retraced back to $16 in the early days of March After that, DOT managed to build a bullish momentum and reverse the trend in the 4-hour chart. The price has increased by 45% so far. DOT is facing strong resistance at $23 in the same region as it did in the first week of February.

The 4-hour chart is now facing upward, and it could see DOT reverse the longer-term trend which is still bearish. Nonetheless, we could see DOT continue to increase in the coming days. The fear & greed index also shows signs of greed building for DOT traders, indicating that the buying pressure has increased. 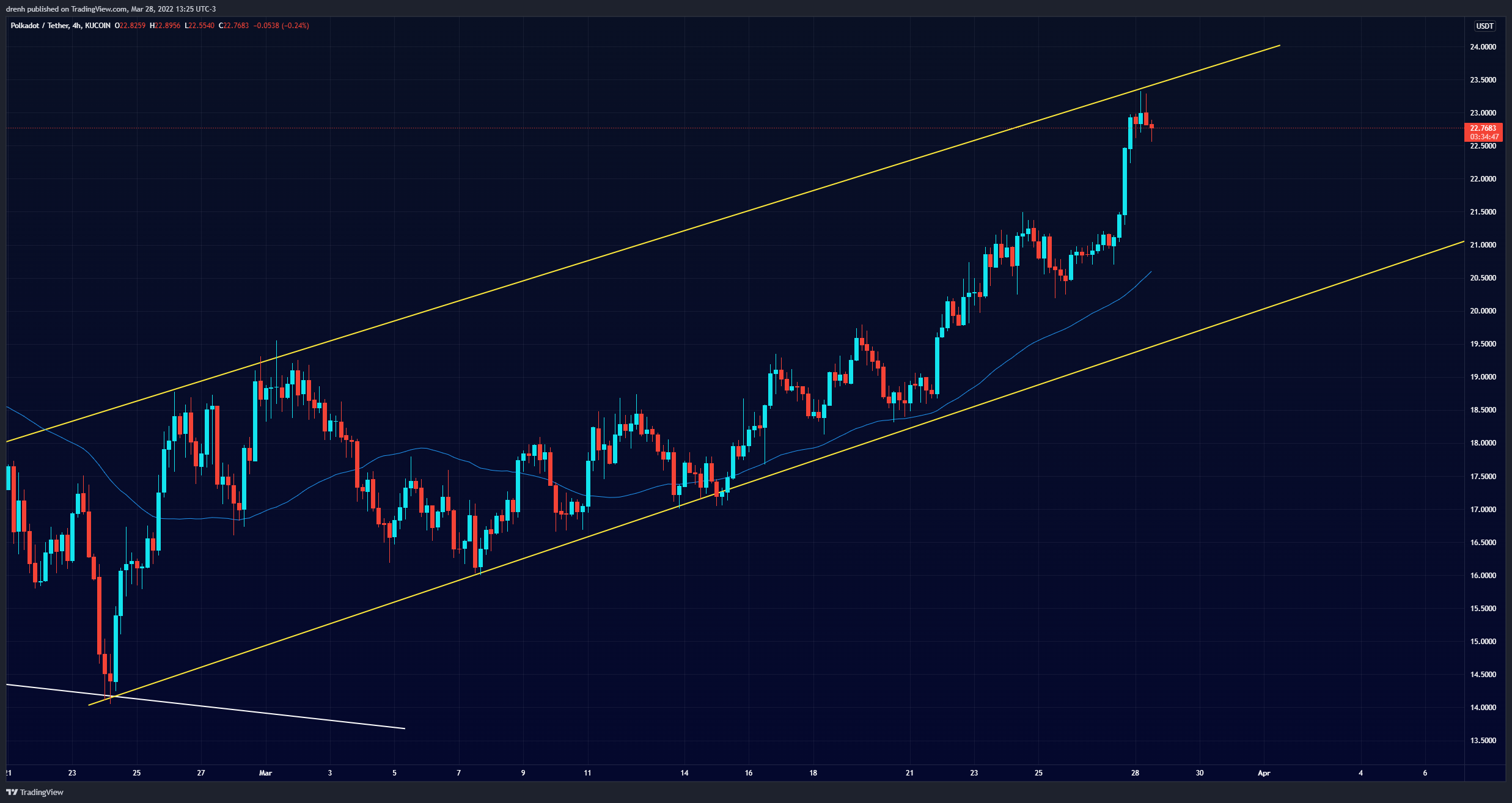 Both the 20-MA and the 50-MA lines of a 4-hour chart are currently below the price of DOT, meaning that the trend is now bullish in the 4-hour chart. This suggests that DOT may keep increasing in the coming days or even weeks.

The 9-EMA line of a 4-hour chart is also below the current price of DOT, indicating that the short-term trend is also bullish and that DOT may keep increasing. Moreover, the EMA line could act as support if the price retraces in the short run.

The RSI of a 4-hour chart is currently above 70, meaning that DOT is currently overbought. Because of this, we may see the price of DOT keep retracing in the 4-hour chart until the RSI is within the 30-70 range and is more stable. 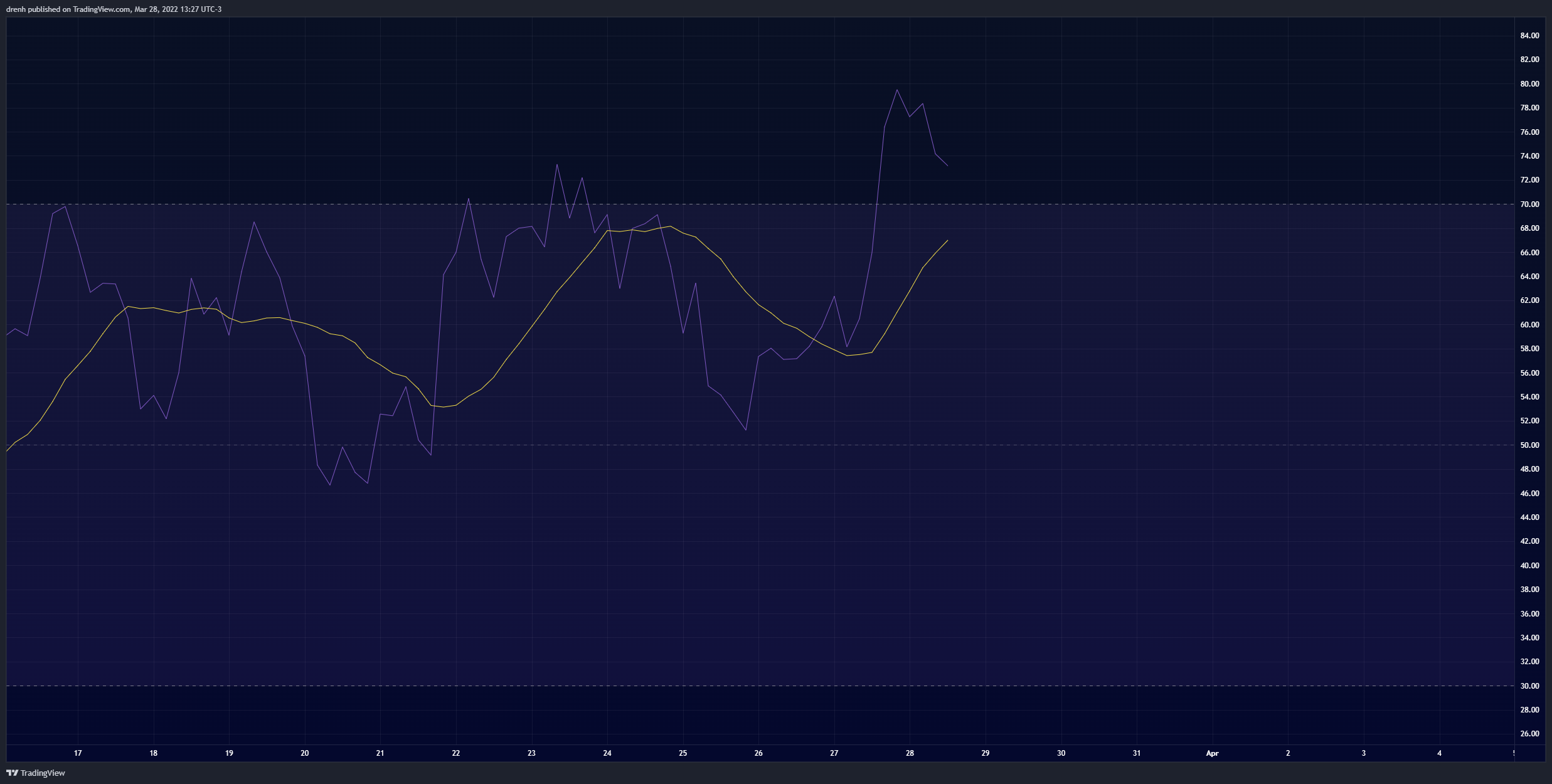 The MACD line of a 4-hour chart is quite above the signal line and above the baseline. This indicates that the momentum is highly bullish and that the price may keep increasing for DOT in the short run. Nonetheless, the lines are currently converging, which could hint at a shift in momentum as the price retraces. 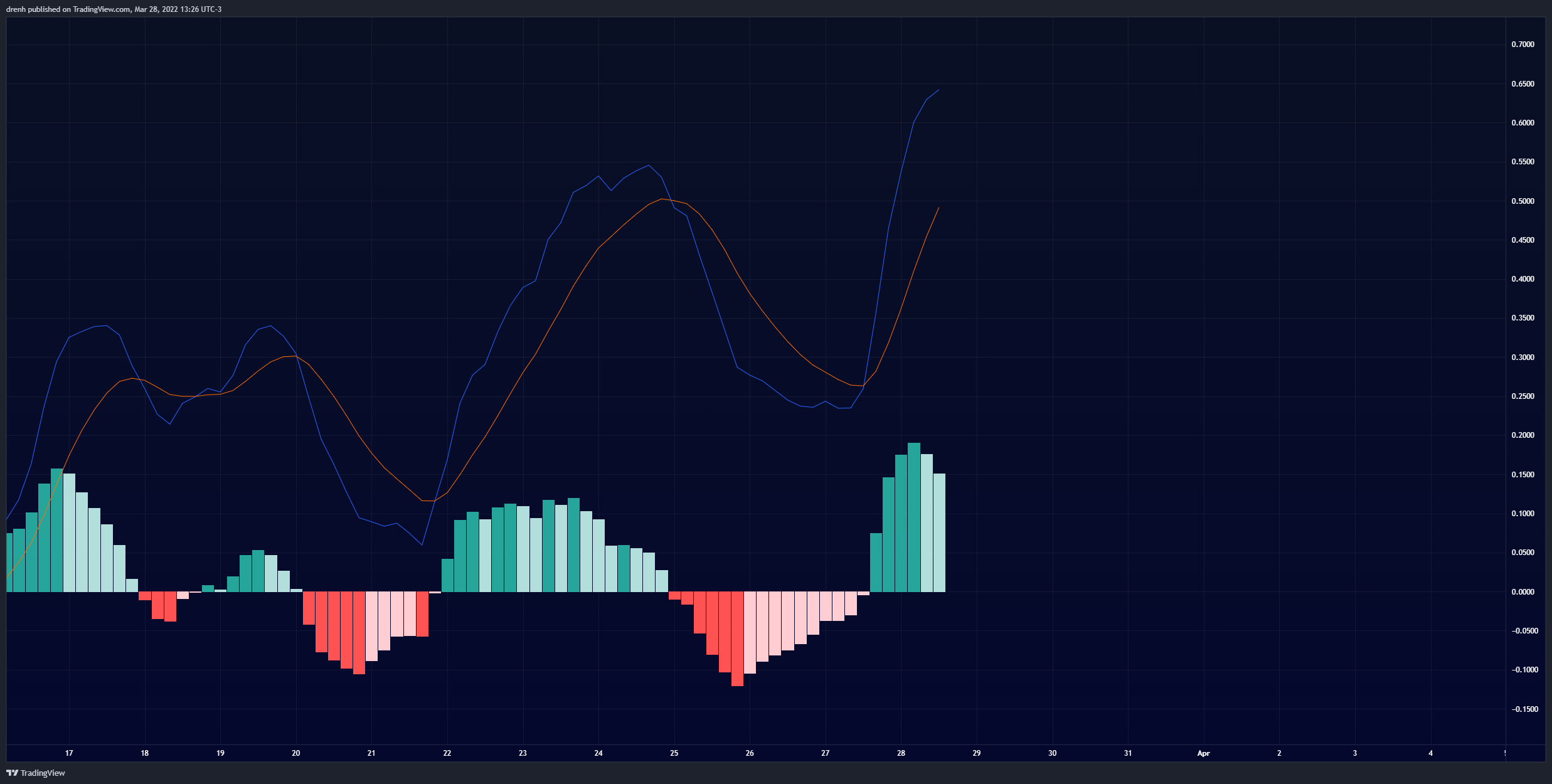 The Fibonacci retracement levels of a 4-hour chart suggest that the price of Polkadot may retrace in the coming hours/days. We could see DOT find support at the 61.8% level, which also aligns well with the previous resistance structure in this chart. 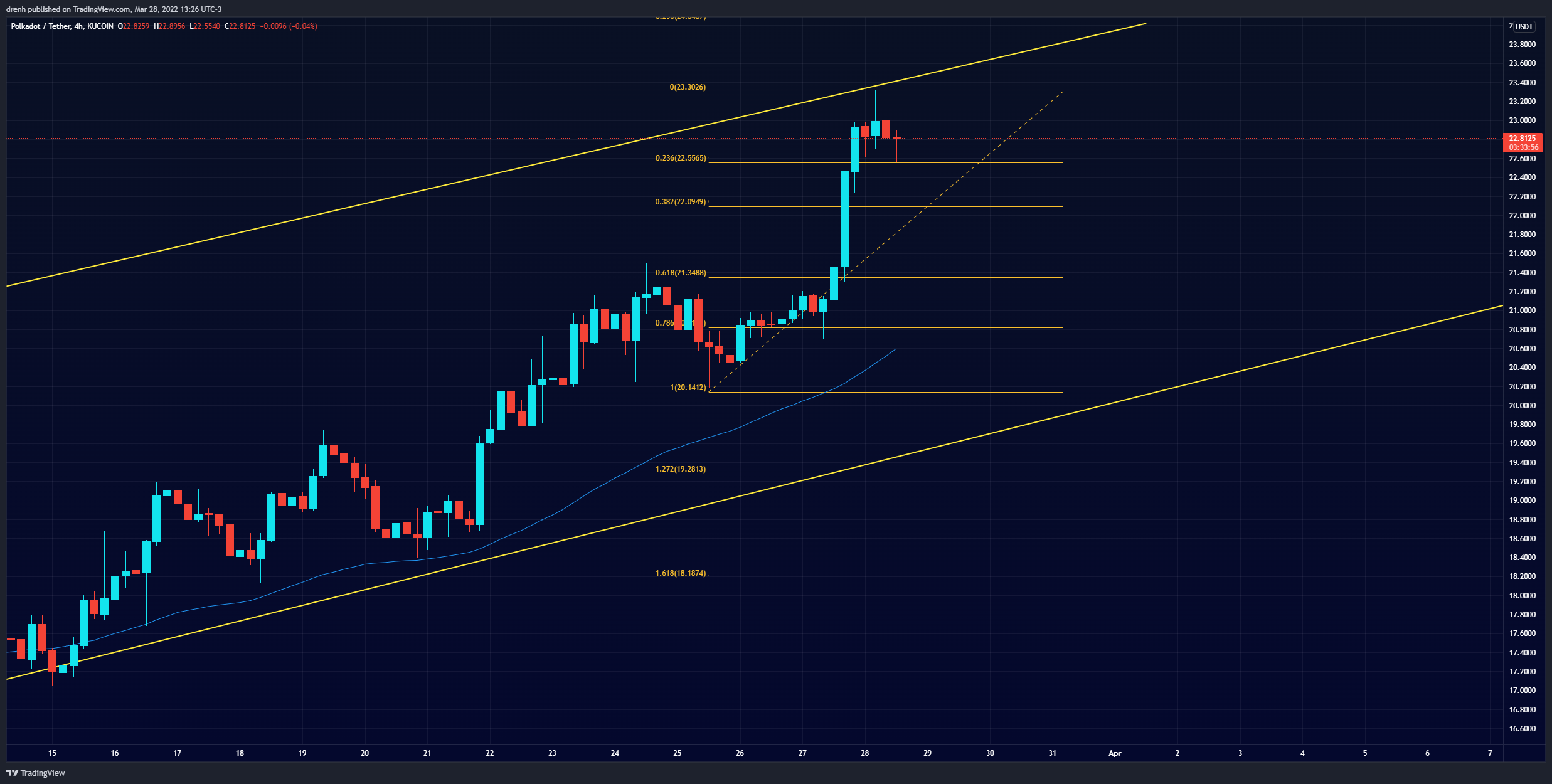 Based on this technical analysis on Polkadot (DOT), the price of DOT may keep retracing in the 4-hour chart. We could see DOT find support slightly above $20, precisely at around $21.40. After that, DOT may have more room for growth and break the current resistance at $23. This retracement is imminent to cool off the greed of DOT traders. Otherwise, extreme greed can overcome the market and lead to a significant price dip. Nonetheless, things are looking good for DOT in the technical aspect, as the price may keep increasing as BTC remains above $45,000. Other things equal, we could see DOT surpassing $30 in the coming weeks of April.

The war between Russia and Ukraine has had everlasting effects on the world, including the crypto market. With that said, Polkadot went to a 6-month low in February, which harmed DOT holders. Nonetheless, the DOT community has been remaining optimistic about the future, and they have now managed to reverse the trend, despite the tensions going on in the world. Recently, the Ukrainian Government announced that they now accept DOT tokens as a means of donation. This certainly increases the demand for DOT as people may want to help those in need.

The people of Ukraine are grateful for the support and donations from the global crypto community as we protect our freedom. We are now accepting Polkadot donations too: $DOT: 1x8aa2N2Ar9SQweJv9vsuZn3WYDHu7gMQu1RePjZuBe33Hv.
More cryptocurrencies to be accepted soon.

Grayscale, one of the biggest crypto institutional investors in the world, recently announced new funding, aiming to help emerging projects that want to utilize smart contracts to the fullest. The project is named Grayscale Smart Contract Platform Ex-Ethereum Fund. Among the various funds, 16.16% of the fund’s weight consists of DOT tokens. This certainly helped with the recent surge in the price of Polkadot.

Other than that, projects within Polkadot look to make DOT even likelier for another boost in the price. Projects such as Acala have managed to capture large audiences and increase their community quite quickly. All in all, DOT looks likely to keep increasing in the coming weeks, both in the technical and fundamental aspects.