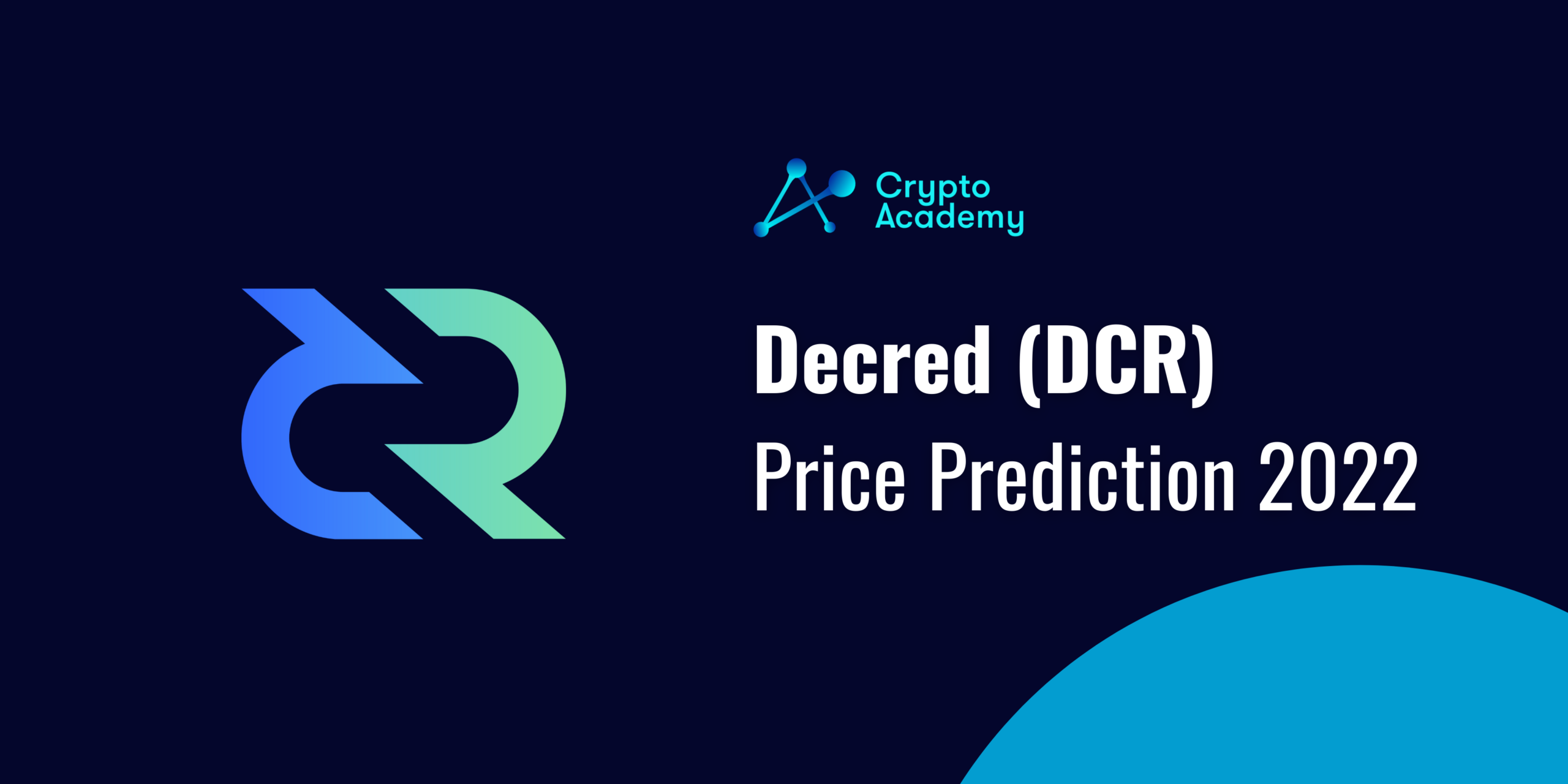 Decred (DCR) is one of the first cryptocurrencies. Its code is a copy of Bitcoin’s code which was modified in an attempt to empower the holders who contributed to changes in their network. Thus, Decred experimented with methods to increase user engagement in the management process and proposed a new one in this approach.

Politeia is a proposal system that helps Decred connect everything. Through it, stakeholders can vote on project funding, new project, and numerous other changes to the protocol code. In addition, Decred (DCR) offers many extra features such as participation in governance, communicating with its community, and utilize for network improvements. Thus, it competes with other cryptocurrencies such as Bitcoin (BTC), Dogecoin (DOGE), or Litecoin (LTC).

Decred originated in 2013 with the publishing of its whitepaper Memcoin2: A Hybrid Proof-of-Work, Proof-of-Stake Cryptocurrency, by pseudonymous inventors, tacotime, and _ingsoc. The project was introduced in 2014 to Company 0 (C0), an open-source development business managed by Jake Yocom-Piatt. This assisted the launch of its mainnet in February 2016. At launch, 8% of tokens (1,680,000 DCR) were pre-mined and distributed evenly among the C0 developers (4% of total supply) and a list of airdrop participants (4% of total supply).

Decred is an open-source, decentralized cryptocurrency, focusing mainly on ensuring the continual recognition of community participation. That is achieved through the use of an open governance model that is supported by long-term funding for project development. Such a concept arose as a result of Bitcoin pioneers, notably the engineers of the widely used btcsuite, dissatisfied with the inefficiency and unfair manner in which Bitcoin protocol updates were implemented.

The Decred creators noticed flaws in this technique and felt it could be addressed by providing a fair playing field for both miners and users. Thus, Decred is an irreversible currency that intends to be a store of value or medium exchange. It is similar to Bitcoin, while elevating decentralization of governance to community participants above the power of centralized mining businesses and key developers.

How Does Decred Work?

At the center of Decred, there is the hybrid Proof-of-Work and Proof-of-Stake consensus mechanism. This mechanism maintains the distributed network of computers running its blockchain. Decred miners, like other PoW cryptocurrencies, expend energy to solve computational problems in order to validate transactions and add blocks to the blockchain.

Decred’s PoS then enables people who own DCR to validate and ratify such transactions while also participating in the network’s governance process. Stakers gain ‘tickets,’ which are non-transferable assets unique to the Decred network, with 20 tickets accessible per block. Five of these tickets are then picked at random, and their owners check the validity of the blocks offered by miners. Once a block has been finalized and put to the blockchain, the block reward is distributed to the participants: 60% miners, 30% stakers, and 10% to a treasury.

In 2018, the Politeia platform was launched to help with the long-term governance of the Decred ecosystem. Politeia is in charge of the different governance procedures and suggestions proposed by Decred stakeholders. It enables Decred to become a Decentralized Autonomous Organization (DAO).

The Decred DAO makes it simple for anybody with valuable skills and expertise to be rewarded for their contributions to the ecosystem. Thus, stakeholders vote on the Politeia platform.

Decred community members are rated on their contribution to the ecosystem rather than their reputation or qualifications. Members may be flexible in their commitments to the projects, making it easier to test it out before making any large commitments that may not be sustainable. As a result, this enables an on-ramp for new users while posing no danger to the Decred ecosystem.

After that, the price started to decline. At the moment the price of Decred is $53.

With its price and a circulating supply of 13.83 Million, Decred has a market capitalization of $730 million. This places Decred at #93 in crypto market rankings.

Decred is a very promising coin of the crypto market, showing real potential due to its projects and visions of the future. Therefore, it is no surprise that DCR might experience increases in both the short and long run. We at Crypto Academy predict that the price of DCR can increase significantly in the coming years.

The year 2021 was when DCR hit an all-time high of $249.55 and then fell drastically in early 2022 with a price of $58.21. Even after the drastic decline of Decred compared to the previous year, this year DCR is growing at a slow pace. Keeping in mind that most cryptocurrencies are currently experiencing declines in prices, of course, it may also affect DCR. According to our predictions, and after close market analysis, the price of one DCR might reach an average of $62.68 by mid-year, approximately June 2022. While, by the end of the year it might reach close to $90, with an average price of $85.68.

During 2023, DCR may be a better option to invest in, and with such large community support, the price of Decred may reach new highs. Price variations are difficult to predict, especially when the market is more bullish or bearish than it has ever been. However, Crypto Academy predicts that Decred’s pricing in 2023 might be close to $102.11. The maximum price might reach $124.11. Moreover, we expect that the average price that Decred might have by the end of the year is about $105.58.

The value of Decred may increase because of the efforts of network developers and community investors. As a result, the expected price for 2024 is quite bullish. Crypto Academy predicts that DCR might reach a maximum price of $175.46 before the end of 2024. Thus, we suggest that it is quite likely that the future of Decred may improve, and its price may increase. As a result, the anticipated average price of DCR in 2024 might range between $147.58 and $153.16, depending on the market. According to the same tagline, the DCR’s maximum price for 2024 could vary from $149.88 to $176.42.

The cryptocurrency market is highly volatile. Today, it is difficult to predict and stay up with current pricing. Crypto users are still anxious about cryptocurrency bans and additional restrictions. We predict that if the market has a strong bull run in 2025, the price of Decred might hit $363.06. Given that long-term investors are expected to retain it, its average price in 2025 might be about $212.35 and remain there for an extended period of time.

We believe that 2026 may be a bullish year for Decred. If the market turns favorable, Decred (DCR) could reach a new all-time high and exceed $350. We at Crypto Academy predict that the long-term price estimate for DCR may increase and the currency may gain a lot more attention. Thus, we suggest that the maximum trading price for 2026 might be around $1066.72, reaching its new all-time high. The minimum price would be around $332.68, and the average price DCR may trade during the year might be $643.85. 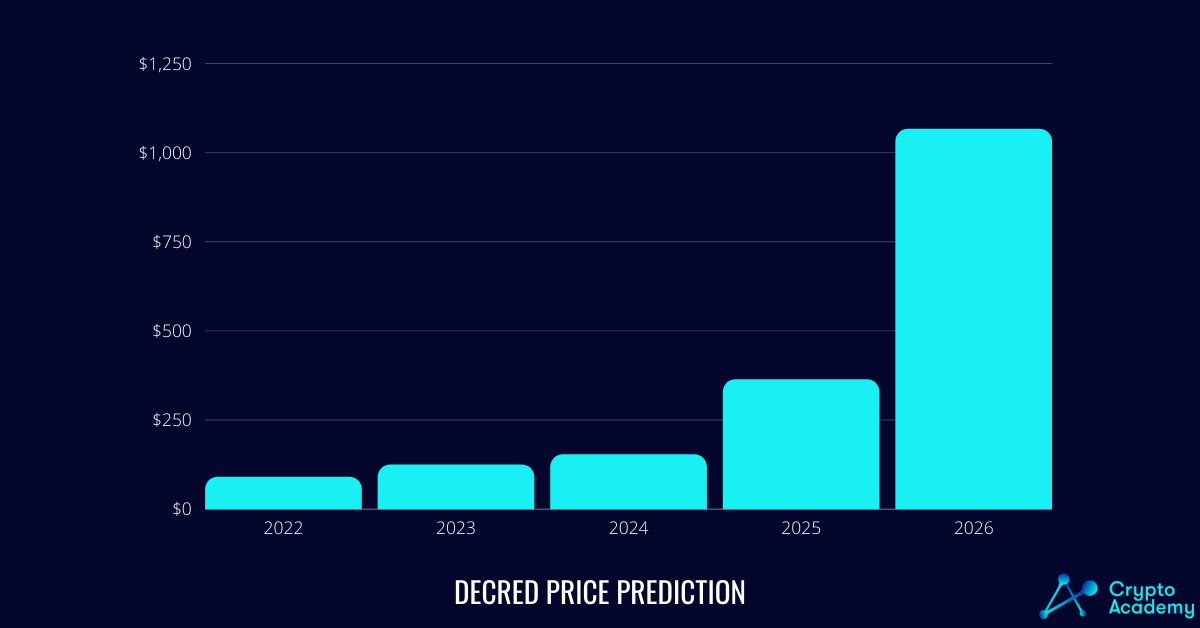 It is quite possible that the price of DCR can exceed massively in the future. Many experts predict that its price may have a bullish increase by checking all the price factors of Decred. 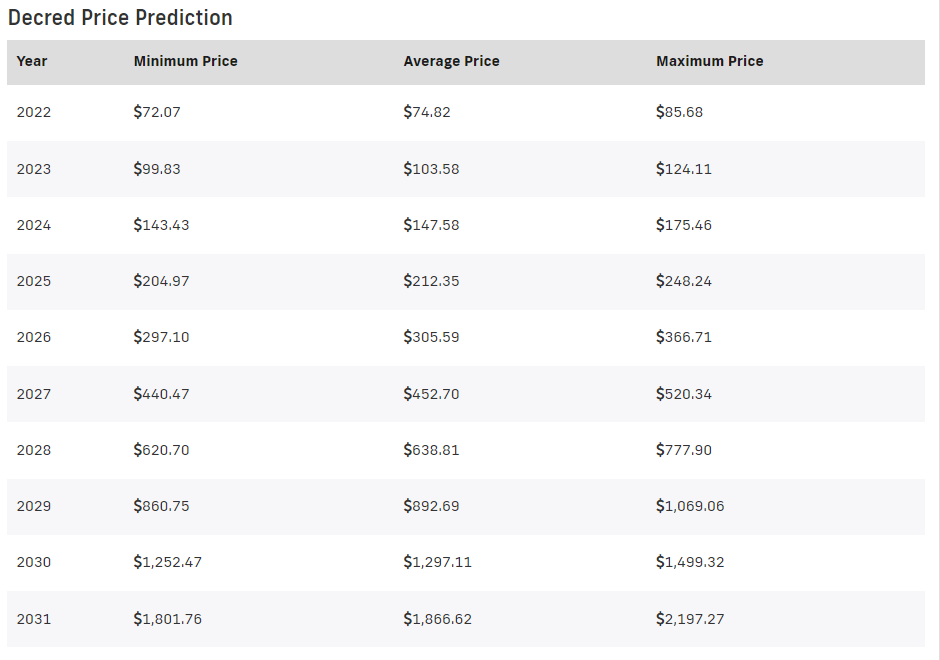 How To Buy Decred (DCR)?

You can buy DCR by following these 3 easy steps:

The first step you need to take in order to buy DCR is to open an exchange account. Exchanges that support DCR are Binance, Bybit, Gate.io. You need to verify your account first so that the exchange remains secure.

The second step is to fund your account. You can do so by transferring tokens from another wallet or using debit/credit cards.

Once you deposit your funds, you can simply choose DCR, determine the amount you want to purchase, and pres BUY.

You now successfully own DCR.

Is Decred a Good Investment?

According to our predictions and expert predictions, it shows that Decred may make a good investment in 2022 and beyond.

Will The Price Of Decred Increase?

Since Decred (DCR) has a limited supply of 21 Million DCR and significant support from the community, it is very likely that the price of Decred may increase.

According to several predictions and our calculations, it is possible that the price of DCR may reach $1000 in a period of 5-6 years.