What is Farmer Doge Token? – Everything You Need to Know About CROP 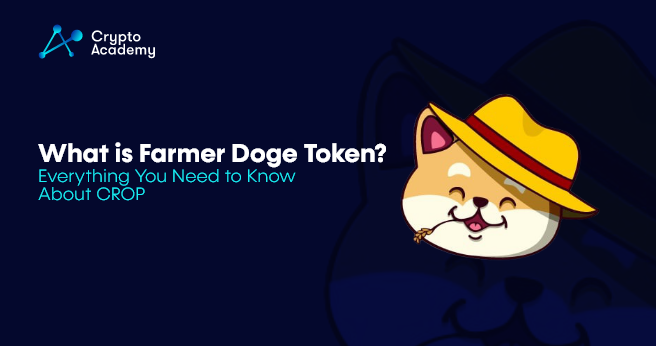 As time passes, new tokens make their debut on the crypto market, with some being better than others. Nevertheless, some meme coins have resulted to be scams and rug pulls. Such projects have stained the whole sector of meme coins, driving investors away. On the other hand, however, we have projects that purely promote the idea behind meme coins. One meme coin that does so is Farmer Doge.

What is Farmer Doge Token?

Well, Farmer Doge is similar to many other meme coins. Yet, the team of this token has managed to make Farmer Doge stand out from the crowd. This token is the first-ever meme coin that uses a multi-currency reward system. Since Farmer Doge is a BEP20 token operating on the Binance Smart Chain, the rewards are various BEP20 tokens. When it comes to farming cryptocurrencies such as Cardano, you will be rewarded with BEP20 tokens that are pegged to them. Moreover, since it operates on BSC, transactions are cheaper and faster. To make the process of distributing rewards easier, they made it automatic. This means that you receive rewards on your wallet without the need to manually claim them.

To make the project more appealing, they presented their roadmap by relating it to farming terms. The first phase is “Planting Seeds” and it includes the launch, website redesign, and the creation of a Discord server. The second phase is “Sprouts & Growth” and it includes the Coingecko & CoinMarketCap listing, team reveal, and audits. The third phase is “Branches & Leaves” and it includes launching their merch, several CEX listings, and a partnership with farms. Last but not least, they have the fourth phase known as“Fruit & Harvest” which includes the FarmerDoge NFTs and Swap debut.

Farmer Doge is a token that wants to bring real value to this space. Their vision is a world without famine. They want to achieve this by starting small, of course. First off, their roadmap shows that they will begin collaborating with farmers to get their leftover fruits and vegetables. Then, with help from local restaurants, they will prepare meals for people who have nothing to eat. They plan on going global sometime in the future.

As we said before, meme coins are all about the community. Although there is a lot of doubt when it comes to meme coins, Farmer Doge is doing its best to prove itself as a project with value.

Even though their team is still anonymous, Farmer Doge Token is audited by Brewlabs. The latter provided a thorough analysis of the token’s contract, where they found 0 critical vulnerabilities, minor security issues, and info findings. Moreover, they believe that the project is functional, well-structured, and user-friendly. One issue that they identified about their website, however, is that there were some misplaced elements.

Moving on, they verified that the token has and will continue to have a use case. They claim that Farmer Doge will focus on charitable purchases and different humanitarian causes. On their audit, they note 7 core use cases, 6 development resources, and 7 other use cases such as staking pools and farms.

Since Farmer Doge is a meme coin, it uses tokenomics that are similar to other tokens. Their maximum supply is 10 billion, more than 10 times lower than that of Dogecoin. At the time of writing, their fully diluted market capitalization is $4.8 million. This makes them a low-cap token with huge potential. There is a buy & sell tax on each transaction, 10% of which is redistributed as rewards; 3% go to the operations wallet; 2% go to the liquidity pool. Such a tax is healthy for the market of CROP since it makes it self-sustainable and decentralized.

When it made its debut, 5% of the total supply went to the Dev wallet, 33% went towards fair launch, and 62% were distributed through a private sale.

Our Farmer Doge price prediction shows a more in-depth analysis of what this token might achieve in the future. There, we use all kinds of analyses in order to be as accurate as possible.