NEAR Protocol Price Prediction 2022 and Beyond – Can NEAR Reach $100 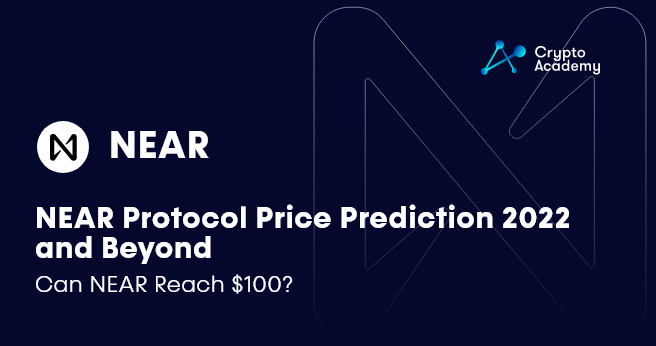 The software called NEAR Protocol aims to incentivize a computer network to operate a platform where developers can form and launch decentralized applications. The basic concept called sharding is marked by the Protocol’s design, just in order to divide the network’s infrastructure into many compartments so that the nodes can hold a fraction of the network’s total transactions. Hence, sharding makes the retrieval of network data and scaling of the platform a much more efficient way, as it distributes the segments across the network.

Like Amazon Web Services (AWS) and other centralized data storage, NEAR also serves as a base layer for building applications on it. However, a distributed network of computers operates and maintains NEAR instead of running by a single entity. NEAR Protocol also encourages an architecture similar to AWS, as their developers implement code in the cloud without a need to create their own infrastructure, and Near Protocol is built on a computer network and the native cryptocurrency token NEAR.

Near Protocol (NEAR) Fundamental Analysis

The Near Protocol runs through their community of creators, innovators, and some wild cards that work together to build a strong ecosystem. It already has more than a million accounts on the platform with more than a hundred guilds and DAOs, more than eighty-three thousand members, and more than five million dollars of the community fund. The platform can help users make connections among people with the same passions. It also produces a positive impact by giving governance, data, and money to the people and hence gives a better future to those who contribute to building it. People love to make their living after getting paid for their contributions on the network, as it is very simple, scalable, interoperable, and is a certified climate-neutral blockchain.

Basically, NEAR is a platform that hosts applications with access to a mutual secure pool containing money, identity, and data controlled by their users. Their communities, called guilds, make up a magnificent Near community, and all of them share a mutual mission for driving a more open, connected, and consumer-oriented world. Any user can start learning and earning with high progress in many ways, including open web sandbox, education, joining discord, and community events. An open sandbox is a secure place for asking queries and getting acquainted. The platform provides an opportunity to learn and explore the basics and technologies of the ecosystem. They can join the discord and community events to enter ongoing conversations.

How Does NEAR Protocol Work?

Instead of incentivizing pools, the network activates permissionless engagement with potential node operators to preserve true decentralization. NEAR Protocol implements the “Threshold Proof of Stake” staking mechanism to make the process very fair, decentralized, and predictable. This prevents the strong validators from pooling and encourages a broad involvement by nodes. As they minimize the hindrances for nodes at the entrance, the node does not only achieve network decentralization but also lets more nodes join NEAR, a dynamic scaling system, and grow further.

The governance model of NEAR makes sure to enable instant improvement in Protocol and also gives enough input and supervision to secure the independent Protocol and community. Aims for the long-term include a combination of efficient decisions, community-led creativity and execution, and getting enough representation of every important stakeholder position in the network.

The primary native asset of the Near protocol ecosystem is NEAR. All the accounts have access to the primary native asset. The tokens identical to Ether are the only digital asset of their kind. Tokens are used to pay for the completion of transactions and to keep data. It can be used to take part in running a validation node as s part of the network by staking procedure to run a validating node and in influencing the distribution of network resources and their future technological direction. This token empowers the new behaviors of apps in the network and the economic synchronization of all network members. You can earn the tokens by participating in network building and development, managing a community, working as an active community member, and winning a NEAR hackathon.

In August 2018, Illia Polosukhin and Alexander Skidanov made the team and decided to make a scalable, permissionless, and fully sharded blockchain that led to the formation of Near Protocol. In April 2020, the first stage of its multistage mainnet rollout began. The network worked through a Proof of Authority (PoA) consensus system in which the non-profit organization NEAR Foundation supports the development of the Protocol and operates the nodes. In September 2022, the second stage of Near’s mainnet rollout took place with a network change. Unlike the centralized first phase, Near Protocol began third-party onboarding validators in this phase, and not only the Near Foundation managed it.

October 2020 was marked with an On-Chain upgrade for making the blockchain community governed. It was the last stage for Near’s gradual manner rollout planned till now. In this phase, an on-chain governance vote decided to give the protocol governance responsibility to the community, and the feature of token transfer and Protocol rewards were also unlocked. At least in April 2021, network integration took place after the NEAR Foundation introduced a rainbow bridge for connecting Ethereum with NEAR blockchains.

Near Protocol (NEAR) Price Analysis

The NEAR Protocol price is $12.50 at present, with a trading volume of $900 million. Currently, its ranking, according to CoinMarketCap, is #19, with a market cap of more than $8.4 billion. It has a maximum supply of one billion NEAR coins and a circulating supply of 673 million NEAR coins. It is performing very well in terms of price, and the price is surging at a very fast pace.

We have given below an estimate of future prices of Near Protocol that are not to be considered as trading advice.

By looking at the news regarding the short and long-term price trends, along with its multistage mainnet rollout and proof-of-authority consensus, we feel that the minimum price of NEAR is $30, with an average price of $34. By facing all the adverse situations aggressively, it is most likely to hit the maximum price level of $40.

After observing the jaw-dropping performance of NEAR in the market, its bullish ride, and its management by the NEAR foundation and third-party validators, we expect a minimum price of $50. With its good potential to attain a high price, the maximum price this year can be about $65, with an average price of around $58.

This year might prove to be very valuable in terms of price this year, as NEAR Protocol can surpass the highest level of $85, as no critical factor like pandemics or recession is expected to shake the global economy. Their on-chain governance, token transfer, and rewards can make their minimum price as high as $75, with an average price of $80.

As the traders consider it to be a very good investment in the long-term due to its network integration between Ethereum and Near blockchains, the price for NEAR coins might hit an all-time high of $100 this year. Under very unfavorable circumstances, the minimum price can be $82, with an average price of $87. 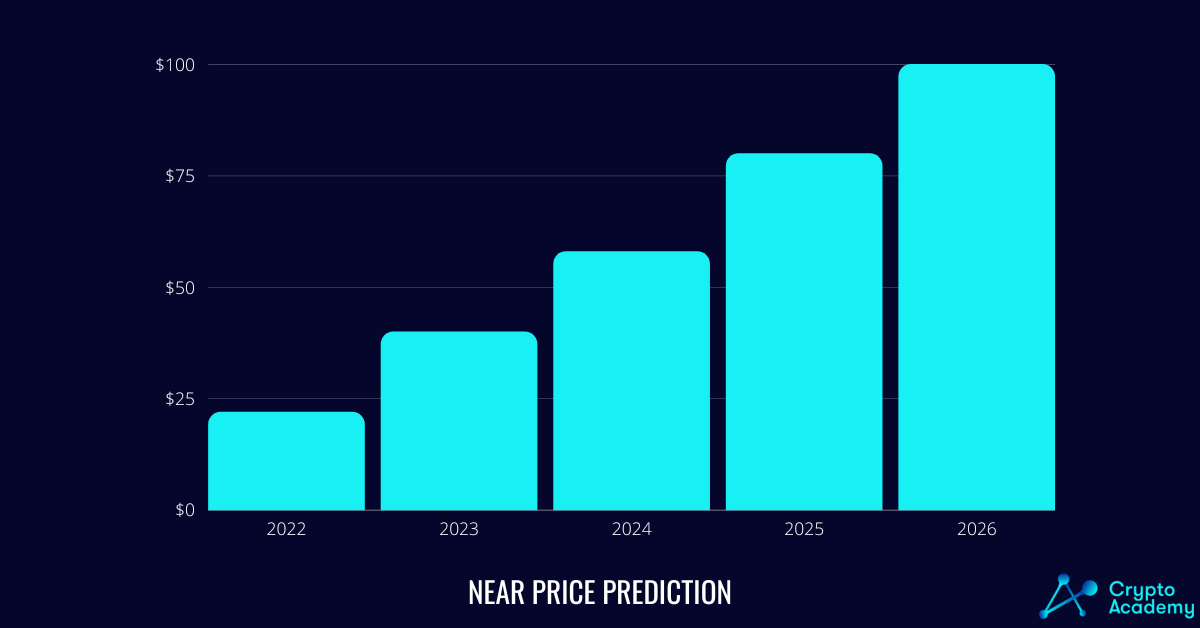 Following are the price predictions for NEAR by different trading websites. Most of them are optimistic about their future.

Wallet investors consider NEAR to be a profitable investment as they think that its current price of $12.072 would increase in value in the future. You can buy 8.284 NEAR tokens using 100 dollars, but their forecast says that it will have a long-term increase in its price. As the price of one token can increase to $65.764 in 2027, a 5-year investment from now would yield a revenue of around +444.76%. Hence, your current investment of $100 may be worth around $544.76 in 2027.

Their price prediction for NEAR Protocol says that the coin may hit $14.98 by the end of the year 2022, so if you have NEAR tokens or you plan to buy them in the near future, you should hold them for long-term, as they have the potential for good revenue.

How to buy NEAR

Follow the steps given below to have an easy guide for buying NEAR tokens.

You will have to create an account on a trading platform, such as Binance or Crypto.com. In countries other than the United States, you can access Binance on Binance.com. For US investors, the best place to buy NEAR would be Crypto.com, a powerful application available on both iOS and Android phones. Before purchasing NEAR, you will have to verify your identity as an exchange account. This process usually requires your social security number, address, and an image of your passport or driving license.

After setting up and verifying your account, you are ready to fund your account and ultimately trade. So, choose a payment method to fund your account with cash. Select one among credit card and bank account transfers. However, if you are using Crypto.com and want to fund using USD, the simplest and easiest way would be am instant ACH deposits, as the app guides you to link your bank account for this deposit. If you already have another supported crypto, you can use them for trading NEAR on the Crypto.com account.

After funding your account, find the appropriate trading pair of the funded currency with NEAR and review all the information regarding this purchase. After getting satisfied, please make your purchase by confirming it. You can store them on the exchange after the purchase, but if you plan to use tokens on DApps, please transfer these tokens to a wallet that stores NEAR.

Is NEAR a good investment?

Yes, it is a good investment, as predicted by us and most of the crypto-related websites.

Where to buy NEAR?

You can buy NEAR from Binance.com and Crypto.com.