What is EternalFlow – A Detailed Explanation 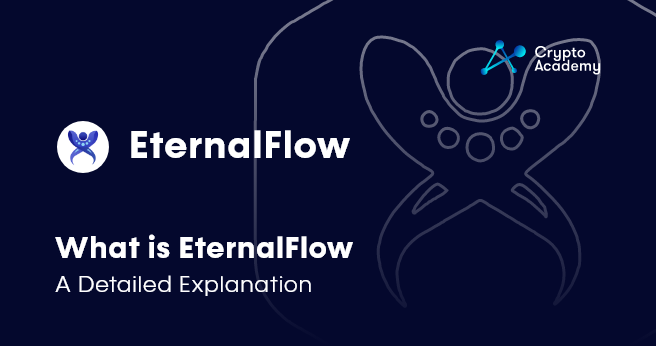 As the crypto industry grows, so does the number of projects operating in it. To this day, more than 18,000 cryptocurrencies and tokens have joined the market. However, most of these projects are not healthy ones. Considering that transactions on the blockchain are anonymous, it is easy for people to be taken advantage of in this space. There are hundreds of projects that are rug pulls, frauds, and scams. However, that does not mean that crypto as a whole is a scam. Alongside these fraudulent projects, there are hundreds of projects that continuously work to revolutionize the future of crypto – and one of them is EternalFlow.

But what is EternalFlow? How does it work and what is so special about it?

EternalFlow (EFT) is a BEP-20 token operating on the Binance Smart Chain (BSC) that offers 15% dividends in Binance pegged Ethereum. This next-generation token seeks to redefine how reflective dividend tokens work by funneling future game revenue directly back to the company’s core token via randomly scheduled buybacks. This unique and innovative approach sets EFT apart from its competition and certainly seems promising.

Their roadmap has several phases, each of them having specific targets that have been met and checked off. Some notable achievements to date include: EFT getting listed on CoinMarketCap & CoinGecko, successfully completing a contract audit by ContractChecker, initiated staking on the BrewLabs platform, KYC’ed, and incorporated under EFT Technologies as a Singapore based company. Their roadmap lays out a detailed and actionable plan for the project’s success, with many steps already completed ahead of schedule. A quick review of EternalFlow’s impressive roadmap is a demonstration of the team’s professionalism, drive, and determination.

The team is currently at the midway point of its flagship NFT P2E game, Fighters of Legend, with an anticipated game launch in August/September of this year. The Fighters of Legend game fills a unique niche in the EFT ecosystem by generating revenue through its in-game marketplace. Within this marketplace, players will purchase NFT game assets to upgrade their teams and strengthen their fighters. These revenues will then be utilized for EFT buybacks, token burns, and staking. All of which will increase trading volumes and subsequently increase dividend payments for EFT holders. 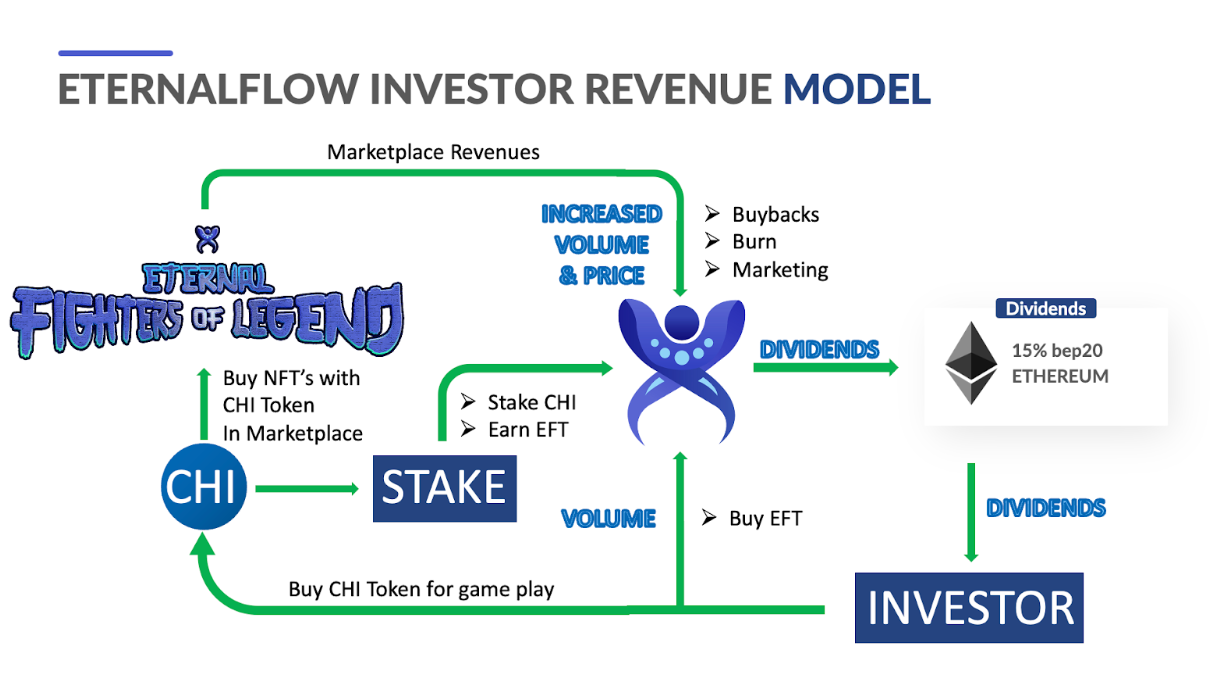 They believe that transparency is one of the key elements in the crypto space. By being transparent, EternalFlow aims to build trust and credibility for its project. They work to inform their community about every step they take in their journey to grow the EFT ecosystem and company.

As per the longevity of this project, the team plans to keep this token running for as long as possible. They want to do this by staying connected to their community since that is what keeps crypto projects alive. Their current roadmap highlights goals for the year 2022. Nevertheless, they will continue developing new games to grow the ecosystem and increase rewards for EFT holders.

EFT’s tokenomics help to set it apart from its competition. EternalFlow has a maximum supply of 1 Quadrillion tokens. This has become a trend in the DeFi space, with many tokens having the same maximum supply. However, according to BSCscan, 60% of the supply has been burned and about 15% is currently locked, which leaves around 25% of the supply in circulation.

EFT smart contracts will also apply a tax on each transaction, part of which is sent directly back to holders in the form of Binance pegged Ethereum. This 20% transaction tax can be broken down as follows: 3% to liquidity, 2% to buyback/burn and marketing, then the remaining 15% to dividends.

To further increase transaction volume for the project, EternalFlow is working on a dividend swap feature, also known as a Reflection Pool – a tool that will allow EFT holders to choose which token they get as a dividend reward. The team believes that the freedom to choose your rewards will provide significant value to the community.

As mentioned in their roadmap, EternalFlow is also working on an upcoming play-to-earn (P2E) game. Their whitepaper states that this upcoming game will be powered by NFT technology. The game will accept three tokens: Chi (CHI), Binance Coin (BNB), and Scroll of Wisdom (SOW). These tokens will ensure that the EternalFlow ecosystem remains healthy and stable.

Additionally, this game will generate revenue through NFTs. Similar to Axie Infinity, Fighters of Legend will have its own NFT marketplace. Trading NFTs in the marketplace will incur a 5% transaction fee, which is common for a marketplace of this kind. When reviewing other similar marketplaces and NFT P2E games, the potential to see hundreds of millions of dollars worth of transactions moving through their marketplace is certainly possible.

However, in the EternalFlow revenue model, the transaction fees collected will be utilized for EFT buybacks for burning, staking, contests, and more; the EternalFlow token ecosystem looks like it will be a real game-changer.

Until today, we have seen several blockchain-powered games that use the P2E model. Examples include Axie Infinity, Sandbox, NFT Worlds, and Avarik Saga. Even big names in the NFT space such as Bored Ape Yacht Club are working on their own P2E games. However, to play some of these games, you need at least one NFT from that collection. This makes these games extremely exclusive since NFT collections that have P2E games usually have a higher floor price than NFTs without such features.

When it comes to EternalFlow NFTs, the game characters will be affordable and allow for an easier entry point. The NFT characters are going to be created with unique attributes and styles by utilizing custom genetic algorithms, and they will help drive value to the whole Fighters of Legend game. Through this technology, EternalFlow aims to bring characters and even virtual land to their NFT marketplace. This marketplace will be the main source of in-game collectibles and utilities for the Fighters of Legend game.