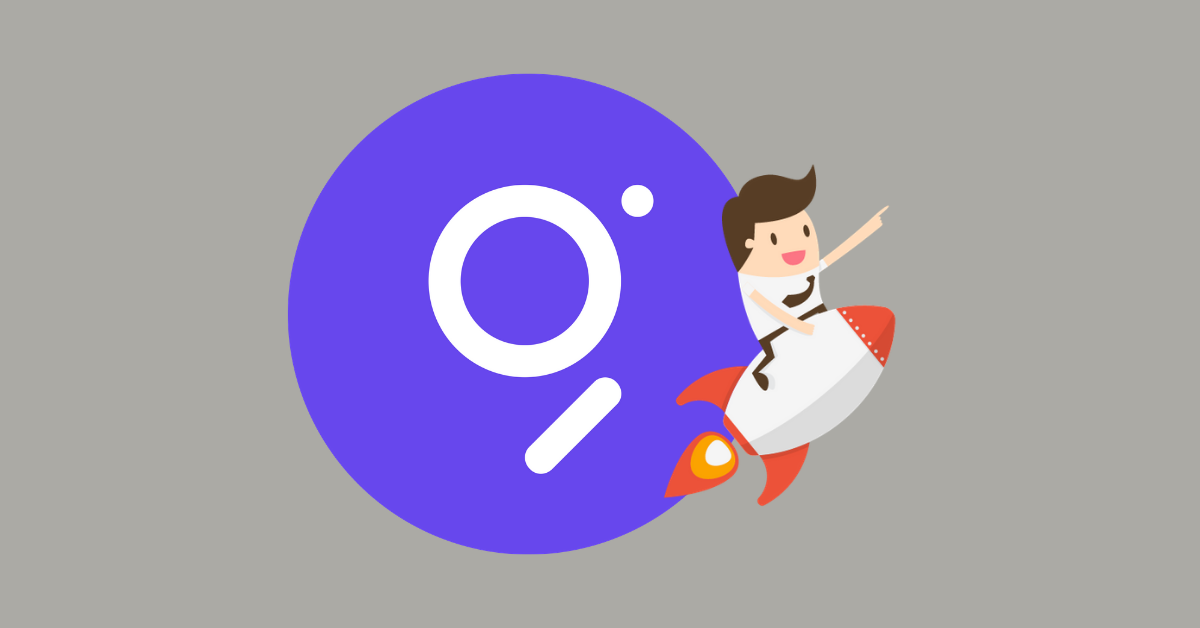 A Deeper Look Into The Graph and Its Future

Almost everyone has heard about Ethereum, not only crypto enthusiasts but even developers who are interested in blockchain overall. If you’re still new to all this, don’t worry. Ethereum is one of the most popular blockchains for decentralized apps and resources. And, as we’ve already said, Ethereum’s well-known blockchain can be used to create a number of different things. With this, many Ethereum-based protocols are gaining attention, one of them being The Graph.

Today, we bring you an in-depth look at The Graph (GRT). It all began with Ethereum, as The Graph is an ERC20 token and a shared protocol for indexing and querying data from blockchains. The protocol enables crypto users to ask for data that would otherwise be impossible to access directly. Many have begun referring to this new protocol as the “Google of Blockchain.”

What is The Graph (GRT)?

The Graph (GRT) is a shared, openly sourced network that serves as an indexing protocol for blockchain data in networks like Ethereum. The technical terms may seem intimidating, but this ‘indexing’ protocol merely organizes data on the blockchain so that developers can more easily run their frontend operations. Some additional features to the protocol include better accessibility to decentralized apps (DApps) through subgraphs, which we’ll get into detail further down.

The genius mind behind it all is Yaniv Tal, the co-founder, and CEO of The Graph. The members of his founding team dwelled on their firsthand knowledge of the challenges that developers face on the Ethereum blockchain. David Lutterkort, a well-known software programmer, along with Brandon Ramirez, a research lead, are among the team’s members.

The Graph’s mainnet was launched on December 17th, 2020, after three years of in-depth and extensive Beta testing. In recent months, The Graph has grown in popularity and shown demand changes. The Graph had raised roughly $19.5 million in total across seven funding rounds. Some of their well-known investors include Coinbase Ventures, Digital Currency Group, DTC Capital, and Framework Ventures.

To put it simply, the indexing protocol that The Graph serves is a platform for querying data on the blockchain that uses the GraphQL query language. Through this, users have the ability to enjoy smooth transfers and effective production processes.

Developers can make use of The Graph to build and deploy a variety of APIs (Application Programming Interfaces) known as subgraphs. GraphQL is a query language that is used for applications to query these subgraphs. Eventually, you’ll have a full and understandable summary of the data. With a gross production of 10 billion, there’s enough to go around. GRT tokens, The Graph’s native token, have a limited supply of 10,057,044,431.

The GRT token is a utility token that is crucial to the architecture of The Graph network. Curators can use GRT to indicate subgraphs that are worth indexing. On top of that, indexers stake it to keep their incentives in place. Furthermore, people who own GRT tokens but are not looking to be indexers or run the GRT node can become delegators and receive a portion of the indexers’ rewards.

The Graph’s token, GRT, had just been available for a week before it stunned the crypto community by climbing high to $1 in merely a few days. The price was $0.034 at the point of launch, and it slowly began increasing with fewer red candles until it rose to $0.78. This climb, on the other hand, was thought to be the product of a group’s coercion. The party was also blamed for causing a price drop in XRP by liquidating XRP profits and converting them to GRT tokens. Because of this, the price of GRT could have risen significantly. Throughout the beginning of 2021, The Graph resumed trading at a price of $0.35. Following this, the market began to fluctuate and then reached a resistance level of $0.59.

Now it’s time to look forward to 2021 and see where The Graph is going. Many crypto experts have made predictions for 2021 and beyond, deciding if Graph’s future is promising or bleak.

With a price of $0.35, The Graph started off 2021 on a bearish note. The Bulls eventually took over and set an all-time high by hitting $2.88. If the group develops new blockchain integrations, GRT may well climb high and potentially break prior price records.

Coinpedia optimistically predicts that The Graph’s native token could be trading at $15 at the end of 2021. For a more realistic approach, CoinArbitrage forecasts GRT to end the year of selling around $1.55. Similarly, according to DigitalCoinPrice, GRT is expected to sell at an average price of $3.8 by the end of 2021. TradingBeasts provided their predictions for 2021 as well, and forecast a similar ballpark of $2.87 for this December this year. PickACrypto believes that The Graph (GRT) has a strong probability of reaching the $1-$2 USD mark in 2021. WalletInvestor forecasts GRT to conclude 2021 at an average price of $4.62.

Many of these predictions are based on existing dynamics, investor sentiment, and the general trajectory of the cryptocurrency market, as long as the cycle persists and the team at The Graph continues to focus on their offerings and collaborations.

According to Coinpedia, The Graph may start off 2022 with a price of $18. In addition to that, the cryptocurrency could rise again if certain innovations were put through by the team. This, along with bullish market projections may bump up the price even more. By the end of 2022, The Graph may be worth roughly $40 per coin. Following this, by the end of the next five years, GRT may be regarded as the most important currency for the creation of a new decentralized century, according to Coinpedia.

If the community invests in the programs, the price may surge even higher and reach new all-time highs. If the cryptocurrency were to focus on improving its blockchain technology, this may also affect the price as well. Coinpedia forecasts that The Graph could trade in the $90 range by the end of the next five years. 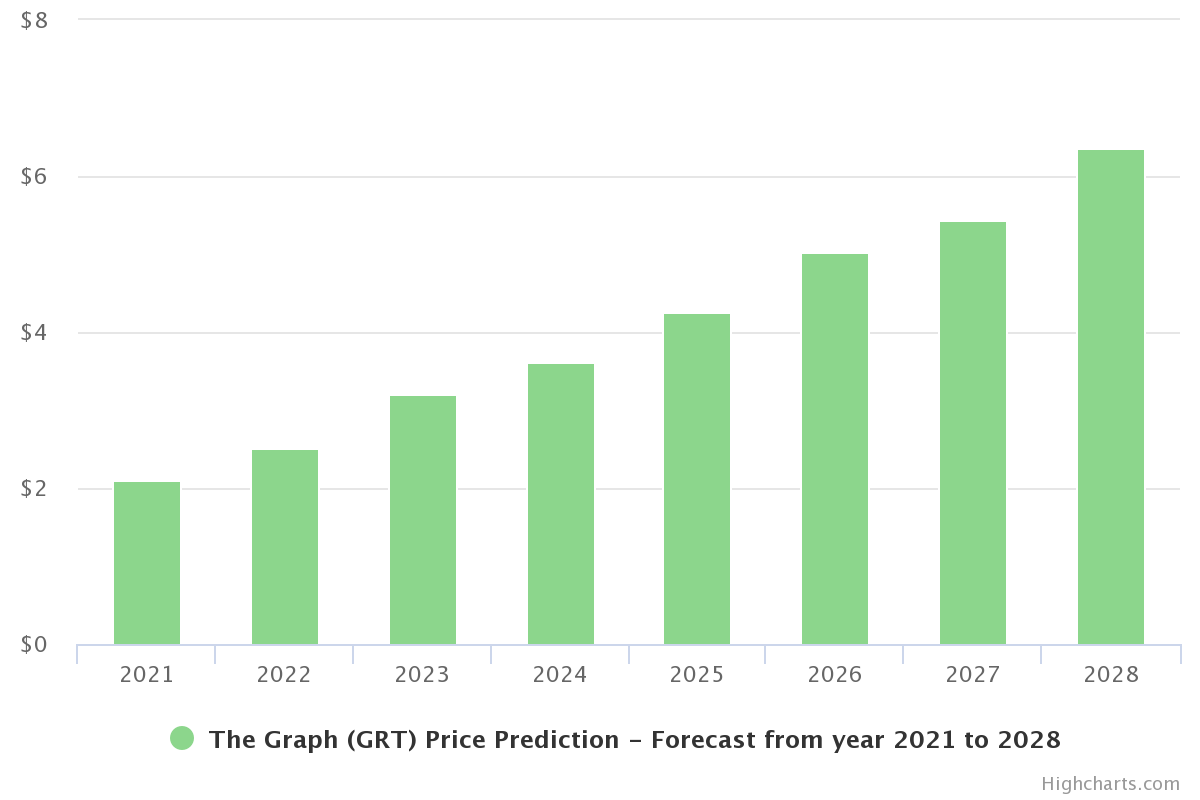 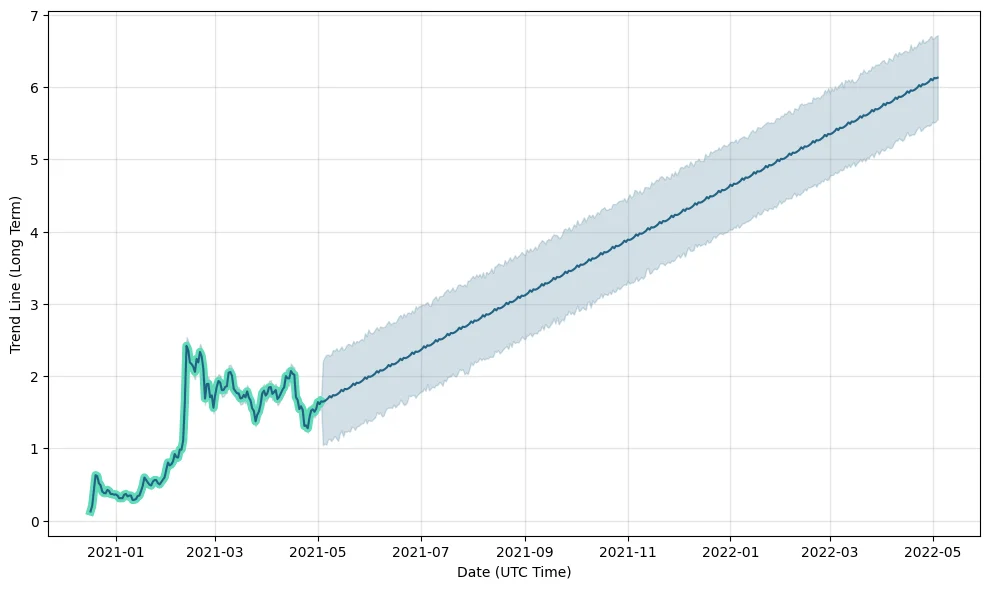 The Graph (GRT) had recently added NEAR, Celo, Polkadot, and Solana to its list of supported cryptocurrencies after initially launching with Ethereum. At that time, the team had announced that Bitcoin, Binance Smart Chain, Avalanche, Cosmos, and Flow were all being considered for integration. One of those shortlisted may well be included next, with Binance Smart Chain already included.

The team at The Graph also announced back in February that it would launch its own software development company, Edge & Node. They have hope to begin evolving its blockchain protocol and continue its line of innovation. Additionally, by launching on-chain governance – The Graph Council – in the future, the Graph core team hopes to further decentralize the protocol. The protocol in use right now on the Ethereum mainnet only indexes Ethereum, but multi-blockchain support is one of the places where further research is required. More well-known projects, such as Uniswap, Decentraland, Aragon, and Synthetix, have also taken The Graph into adoption. The Graph seems to be one of the missing pieces in the quest to increase the decentralization of DApps.

Many crypto enthusiasts are referring to The Graph as the “Google of Blockchains,” citing parallels between Google’s indexing of websites and The Graph’s indexing of blockchains and decentralized applications. If this comes to be true, and The Graph becomes the norm for indexing web3, it has a load of room to expand.

Is The Graph (GRT) a Good Investment?

It’s quite clear that the forecasts for The Graph are all positive. Regardless of what pace, each prediction poses some sort of future growth for GRT. But there’s more to the coin than just its price and it actually has quite a bit to bring to the table for potential investors.

Ethereum’s business presence has only gotten stronger since the recent surge of the DeFi industry. With hundreds and hundreds of platforms releasing since 2020, Ethereum is by far the most common DeFi blockchain and also acts as the foundation for many others too. As a result, The Graph is in an ideal position to aim toward this growth.

The Graph is also being used by a number of networks, including the well-known decentralized exchange Uniswap, since April 2021. With more and more collaborations and a rise in adoption, GRT has a promising future ahead of it, with favorable price increases expected over time.

Then there’s its technology. There are a number of advantages to The Graph’s blockchain protocol. The network, in particular, will index data from Ethereum, IPFS, and PoA networks. The Graph removes the technological barriers and easily enables querying through its network, and it’s also the first of its kind.

In an industry on the edge of another breakthrough year, The Graph puts out a much-needed tool for everyone. The network continues to support the decentralized sector’s growth and creativity. As the industry and markets continue to grow, we can expect to see many more DeFi platforms use this safe and powerful way of obtaining Ethereum blockchain info.

Algorand Price Prediction 2021 and Beyond – Is ALGO a Good Investment?

Algorand Price Prediction 2021 and Beyond – Is ALGO a Good Investment?