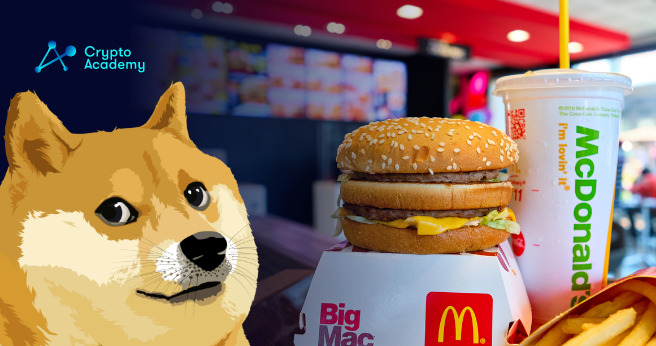 The world’s giant fast-food company, McDonald’s, is receiving requests from Dogecoin (DOGE) holders to accept DOGE as payment. The official Twitter account of McDonald’s has been swamped with calls for the company to embrace Dogecoin.

Regarding the incite for DOGE payments, McDonald’s tweeted a photo of Doge clutching a French fry in his mouth. This came as a response to Bill Markus’s prior tweets, the originator of the meme currency. To add to this, Markus is the one who had contacted the McDonald Corporation.

hey #dogecoin fam let’s make sure this tweet response of McDonald’s is their highest engagement one https://t.co/9nZPRy8p53

Concerning this, McDonald’s response was quite normal. The foremost world’s fast-food company stated that it would continue to evaluate its customers’ payment experiences in the future.

McDonald’s Into The Crypto Space

To mark the 40th anniversary of McDonald’s, the company launched its first collection of non-fungible tokens (NFTs) in November. The NFTs basically commemorate the anniversary of the McRib.

Moreover, McDonald’s restaurant franchise launched MacCoin in July 2018. Many people supposed it was the company’s foray into cryptocurrency during the pinnacle of the 2017 crypto-mania. However, it was only a novelty voucher for a free burger that had nothing to do with blockchain technology.

Additionally, McDonald’s began accepting Bitcoin in El Salvador. This comes after the tropical nation became the first in the world to recognize the flagship cryptocurrency as legal cash. This new law in El Salvador marks a milestone for any government. Likewise, businesses operating in this country, including multinational corporations, are compelled to accept Bitcoin as a form of payment.

Similarly, McDonald’s and other American businesses were under pressure in time for the Winter Olympics. According to media reports, they used China’s central bank digital currency (CBDC). Some of the largest worldwide companies are currently in the process of adopting Dogecoin. Tesla, Space X, Dallas Mavericks, and Newegg are just a few of these major corporations. Similarly, the AMC Theater chain reports that they will be accepting Dogecoin for movie tickets starting from early 2022.

Given these points, it is uncertain whether the large level of Twitter interaction will impact McDonald’s decision.