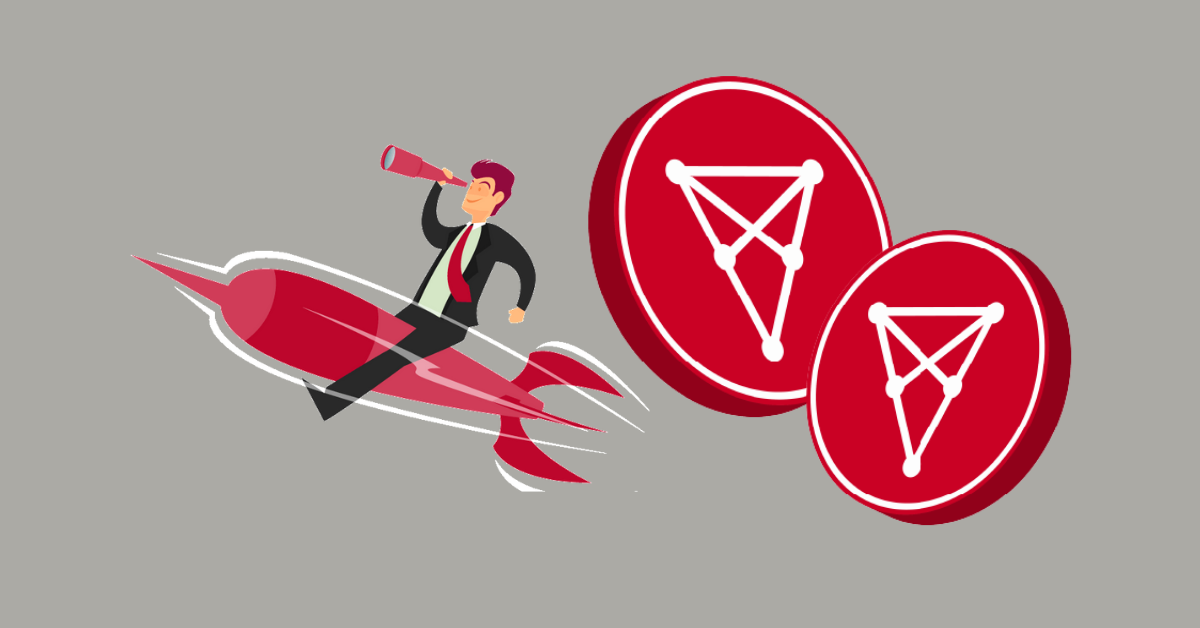 A deeper look into Chiliz – Where is CHZ Headed?

Chiliz (CHZ) positions itself as a top-tier global fintech provider in the sports and entertainment industry. Chiliz created and designed the sports fan interaction platform “Socios” on the Chiliz blockchain, with the Chiliz token (CHZ) as its own currency. Chiliz is bringing a whole lot to the table this year, bringing a lot of potential new users to the crypto world. In this article, we’ll analyze Chiliz and the CHZ token, a short price analysis, and where grand crypto analysts predict Chiliz is headed for 2021 and the future to follow.

What is Chiliz (CHZ)?

Chiliz is a cryptocurrency and payment portal for blockchain-based applications and products targeted at mainstream users. Further than that, Chiliz is a crowd engagement platform that allows businesses in the sports industry to incentivize and monetize customer participation.

The team behind Chiliz understood well the devotion and enthusiasm that comes along with sports fans. Football is a multi-generational passion that plays a huge role in many people’s lives all around the world. Season ticket holders for life, tattooed devotees, and ferocious club rivalries demonstrate how much fans care about the sport.

Chiliz is continuously proving itself to be a promising fan interaction initiative that has taken the crypto community by surprise. This is thanks to the convergence of blockchain, fan tokens, and dedicated cryptocurrency exchange.

Since 2016, there have been numerous updates to the Chiliz platform and many versions have since been debated and investigated. At the beginning of 2018, they placed an aggressive focus on product and team expansion. The team successfully raised $66 million in a private funding round, which was used to create the Socios.com fan experience and rewards application.

8.8 billion CHZ tokens were mined and circulated to early donors later on in October 2018. The CHZ token was then listed on a number of major exchanges, including Binance and BitMax. At the end of 2019, the Socios.com website went live. The noble Italian football team Juventus was the first of many high-profile teams to join the Chiliz roster. Today, Chiliz is a global company with over 80 members and branches all over the world.

Throughout the last 30 days, the growth of the Chiliz network slowed down a bit. On April 20th, there were only 703 newly registered addresses, a 73.3 percent decrease from the previous day’s high of 2,630. The number of unique addresses indicates the level of customer adoption and whether or not the project is gaining or losing steam. A low or declining level of network growth is one of the key signs of a bear run.

Now it’s time to take a look into where Chiliz is headed for 2021. Many crypto analysts have placed their forecasts for 2021 and beyond, determining whether the future for Chiliz looks bright or dim.

When it comes to analyzing CHZ’s long-term prospects, it’s crucial to assess how the coin has performed so far. Some analysts have concluded that human interaction is one of the biggest factors controlling Chiliz on a long-term basis. Humans have coordinated spectator sports as recreation and a substitute for tribal wars since the dawn of time.

On top of this, the Chiliz coin has already gained some new investors in 2021. This is largely because of the price surges the coin experienced throughout the first two weeks of March, as seen in the table below.

Now let’s see what potential prices various analysts predict CHZ will reach this 2021. According to our Tradingbeasts, the Chiliz price may definitely increase this year. The current Chiliz price is $0.52, but the average Chiliz price is forecasted to be $0.67 by the end of 2021. FXStreet similarly predicts the price to increase to at least $0.57 this year. Along with them comes the noble DigitalCoinPrice. This well-known forecasting website has also made its bets for 2021. Both DigitalCoinPrice, as well as Gov Capital, predict the price of CHZ to end off 2021 at an average price of $0.76. Lastly, WalletInvestor provides a more optimistic outlook and faith in the potential of Chiliz with a $0.86 forecast for 2021.

PickACrypto presented a similar forecast. As per their analyses, it’s expected for the price of CHZ to range between $0.30 and $1 from 2022 to 2025. This will come as a result of the team continuously refining their products and attracting their target customers. 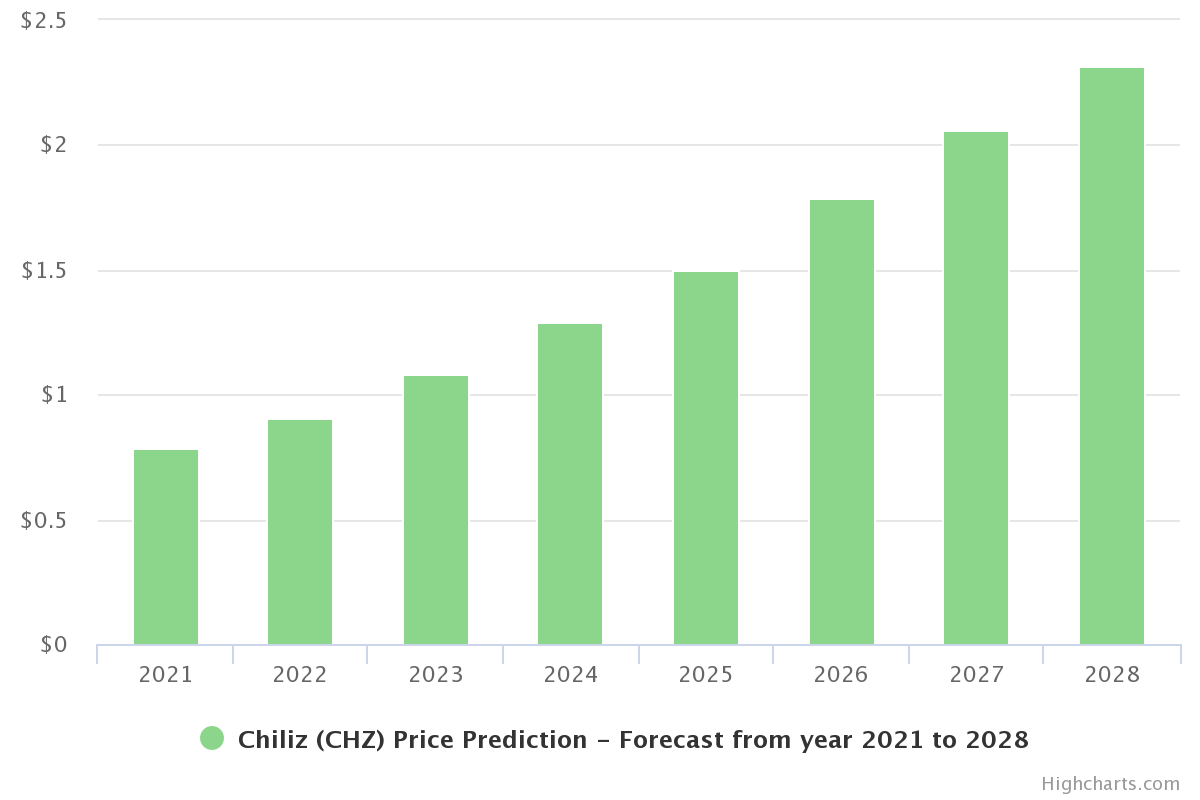 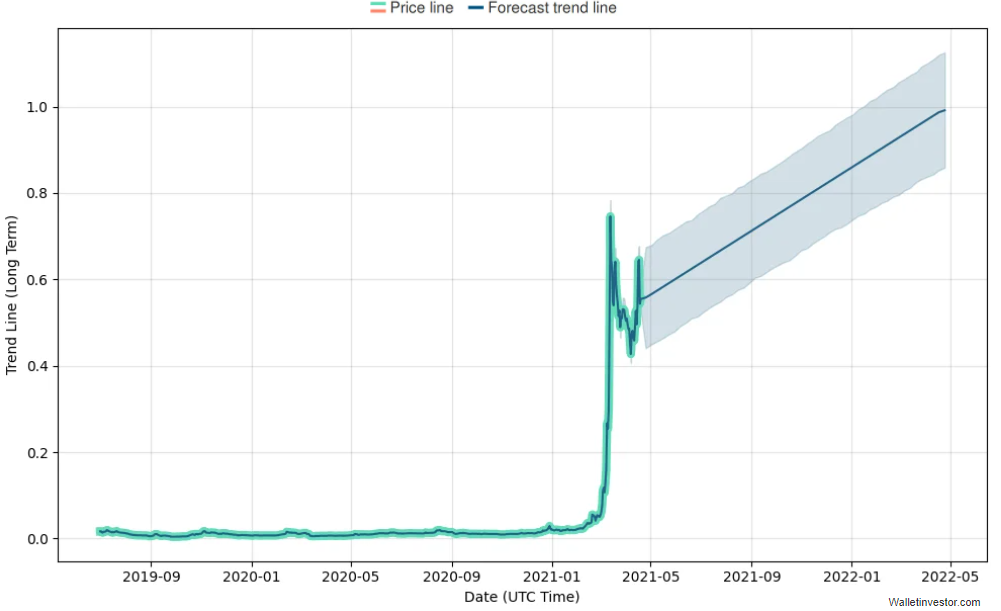 What Potential Factors Can Affect the Price of CHZ?

Acceptance and growth go hand in hand when it comes to cryptocurrencies. Chiliz’s wider adoption has coincided with the Chiliz token’s meteoric rise in value earlier this year since its launch. The CHZ token has a market cap of $2.9 billion at the time of publishing, having reached an all-time high of $0.89 in early March according to CoinMarketCap.

In terms of adoption and expansion, the CEO of Chiliz, Alexandre Dreyfus announced in early March that the business would be extending into the United States also. This may be one of the reasons for CHZ’s sixfold price surge and any potential price climbs in the future. Dreyfus noted the launching of an office in New York City with a $50 million initial investment.

Chilliz is now forming more and more alliances and agreements with major sports teams. This allows the vision to expand across the sports industry, attracting more audiences and future buyers. As a result, CHZ continues to play an important role in the Chiliz ecosystem. If Chiliz is able to further expand its services and products to more teams and varieties of sports, it only leaves room for future growth. FC Barcelona, Paris Saint-Germain, and most recently, AC Milan, have all followed suit since then. On the day that its tokens were issued, AC Milan had made $6 million.

On the Socios.com website, the Chiliz token (CHZ) is the only currency that is accepted. Fans and members use CHZ to purchase branded ‘Fan Tokens’ from well-known sporting teams and organizations around the world. The Ultimate Fighting Championship (UFC) as well as the premier mixed-martial-arts (MMA) body, is also on board. This is a huge step toward a larger crypto footprint in the mainstream.

With any cryptocurrency, the platforms on which the coin is available for buying and selling will always influence its price. With Chiliz, you can do even more than that. Luckily, toward the end of 2020, cryptocurrency exchange Binance created a mutually beneficial strategic partnership with Chiliz. Users of the Binance Launchpool could win Fan Token rewards through staking their Binance Coin (BNB), or Chiliz tokens (CHZ) before mid-January 2021. For 30 days, Fan Tokens from Paris Saint-German and Juventus were available to farm via Binance Launchpool.

To put it into perspective, overall cryptocurrency demand grew by 174 percent in 2021, and the price of Chiliz (CHZ) increased by more than 2,600 percent. In 2021, CHZ has a promising future set out for it. Overall developments in the crypto industry as well as unique changes within the Chiliz ecosystem itself should boost CHZ to hit new heights in 2021.

To begin with, multiple reward programs and tailored ads can be used to accelerate CHZ acceptance. On top of that, the infrastructure will be extended to make onboarding for potential customers easier. Chiliz also hopes to attract more users to make use of the service further by adding extra perks for doing so. This isn’t simply about deliberately selling the different fan tokens in the app; it’s also about other gimmicks.

Furthermore, they’ve added a badge feature where users can be awarded badges for their participation, contributing to their enthusiasm. Through this, Chiliz hopes to increase regular engagement from 15,000 users to about 50,000 users within the year.

Expansion is also on the list for 2021. Collaborations with other exclusive clubs and sports are a priority for Chiliz. They intend to use direct ads to encourage a larger number of users to purchase and sell fan tokens once the base is in place. At that point, more and more sports teams will look for new and efficient ways to connect with their fan clubs and followers. Adoption is definitely growing, as is the interest of the major clubs thanks to additional incentivizing incentives such as CHZ Rewards and other rewards.

Is Chiliz (CHZ) a Good Investment?

It’s crucial as an investor, to consider cost and reward when determining if Chiliz (CHZ) is a decent investment for you. It’s possible to read endless price predictions and forecasts, however, assumptions for both must be rational. Based on the foundations of the Chiliz project and the strides the Team is making toward their roadmap priorities and achievements, we believe CHZ might likely grow in the long run.

Since the crypto market is highly competitive and difficult to forecast over time, it’s pivotal to study the economics and success of Chiliz before agreeing to spend some sum of money in the long term with the intention of holding for months or years. Make sure to stay up to date with market movements and try not to invest more than you can afford to lose.

Basic Attention Token (BAT) Price Prediction 2021 and Beyond – Is BAT a Good Investment?

NEO Price Prediction 2021 and Beyond