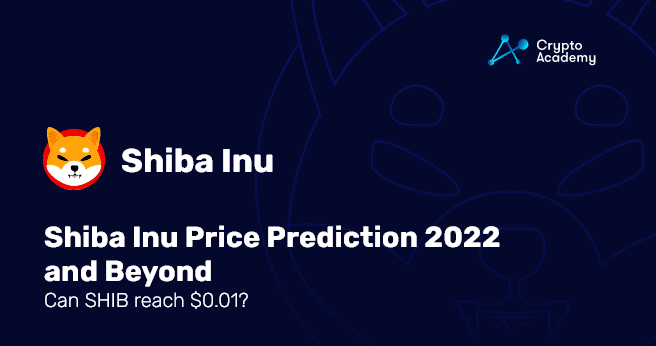 The decentralized cryptocurrency Shiba Inu (SHIB), dubbed as meme coin, was developed in 2020 by an unknown creator using the alias Ryoshi. This Shiba In price prediction explores the depth of the cryptocurrency, the project scope, and price movement in the days to come.

The SHIB cryptocurrency was developed as a direct rival to Dogecoin and is an Ethereum ERC-20 standard token. The token is not backed by any asset and does not support smart contracts. It can, however, be passed from one user to another. SHIB is one of many digital currencies with a canine motif. But unlike Dogecoin, SHIB is creating a whole ecosystem called ShibSwap around itself.

The SHIB coin was initially intended to be merely another “meme” token, but over time it evolved into its own ecosystem supported by a large user base. Shiba Inu promotes the talented members of the ShibArmy by creating an environment that rewards action and development. The Shiba Inu Incubator was designed to aid holders in locating the resources necessary to realize their artistic visions. SHIB is ranked as the fifth most trending coin in Asia.

In Asia, $SHIB stands at the 5th position as the most trending coin, and $BONE ShibaSwap occupies the 10th spot 🚀🤑

Shiba Inu intends to be the Srypt-based mining algorithm for Dogecoin on Ethereum. As they introduce their SHIBA INU community to the NFT market, the SHIBA INU website welcomes doge-inspired artists from all over the world to develop the “arts Shiba movement.” In order to raise money for the Shiba Inu Rescue Association, SHIBA INU has also set up a fundraising campaign on Amazon Smile.

Shib is the “DOGECOIN KILLER,” according to the SHIBA INU website, and is featured on their own DEX, ShibaSwap. The Shiba Inu coin was developed by Ryoshi in August 2020. Ryoshi claims for himself that he is a nobody and unimportant. As a community of investors was lured in by the charming charm of the coin along with articles and tweets from individuals like Elon Musk and Vitalik Buterin, this meme coin swiftly acquired speed and value.

Long thought to be the creator of the Shiba Inu, Vitalik Buterin also refuted such claims on the Lex Fridman show on June 5, 2021. After Vitalik Buterin publicly torched his share of the SHIB supply, Shiba Inu gained enormous fame after initially existing as just one of the numerous meme coins.

Asserting that Shiba Inu would be alright “as long as Vitalik doesn’t bug us,” Ryoshi had granted 50% of the SHIB supply to Buterin. Shiba Inu was added to Coinbase’s platform on September 17, 2021, the biggest cryptocurrency exchange in the United States. Shiba Inu prices increased almost 40% in the two days that followed this revelation, resurfacing as the meme dog token.

As one wallet was discovered that had purchased $8,000 worth of SHIB in the summer of 2020. The wallet held almost $5.7 billion at SHIB’s all-time high valuation, the price increase in October 2021 was legendary for the token’s creation worth. Although the owner of the wallet has not been identified, they appear to have transferred some of their wealth to other wallets a few weeks following the price spike.

The price rise encouraged acceptance among token holders as well. SHIB holds nearly 20% of the total market shares of all ERC-20 tokens in Ethereum whales, according to WhaleStats. Following its all-time high, SHIB also crossed the one million holder threshold.

In addition, when SHIB became even more popular among new investors, retailers began accepting it as a form of payment. In 2021, the South Korean exchange Korbit became the first in the nation to list the SHIB cryptocurrency. Beginning in December 2021, American electronics store Newegg added SHIB, working with cryptocurrency payment processor BitPay to enable SHIB transactions. This happened when more than 500 merchants started using SHIB.

The SHIB community’s ongoing work to create a utility for the Shiba Inu token and the subsequent formation of a whole Shiba Inu ecosystem were two important factors in the further sharp increase in the price of SHIB.

LEASH and BONE are the two tokens that makeup ShibaSwap. In order to boost potential, LEASH’s developers have removed the rebase from the token. With a 107,646 token supply overall, it offers various incentives and rewards on ShibaSwap. The ShibArmy can vote on new ideas for the most recent initiative, Doggy DAO, using the governance token BONE. The total supply of BONE is 250,000.

Ryoshi wanted to test if a perpetually dispersed organization could function without a centralized leadership structure with Shiba Inu. They wrote in a blog post that the division brought on by Buterin’s token donation had strengthened the community and allowed it to spread further and decentralize the movement. According to his plan, the core ecosystem will serve its purpose while the Shiba Inu-owned stablecoin takes over as the primary medium of exchange for value.

The Shiba Inu price on August 19, 2022, is $0.000014, with a trading volume of almost $529 million. The CoinMarketCap currently ranks SHIB as twelfth among all the cryptocurrencies listed. There are 549 thousand billion, with a market cap of $7.8 billion. Overtime SHIB has secured a stable position among growing cryptocurrencies.

We have predicted the future prices of SHIB according to the future vision of Shiba Inu, its roadmap and the market price movement analyses.

The price of Shiba Inu is expected to reach a minimum value of $0.00004 and a maximum value of $0.00012. They can reach an average trading price of $0.00008 throughout 2030 by hosting a yearly ShibaCon convention at an easily accessible location in an unrestricted country for inclusive global plebs. 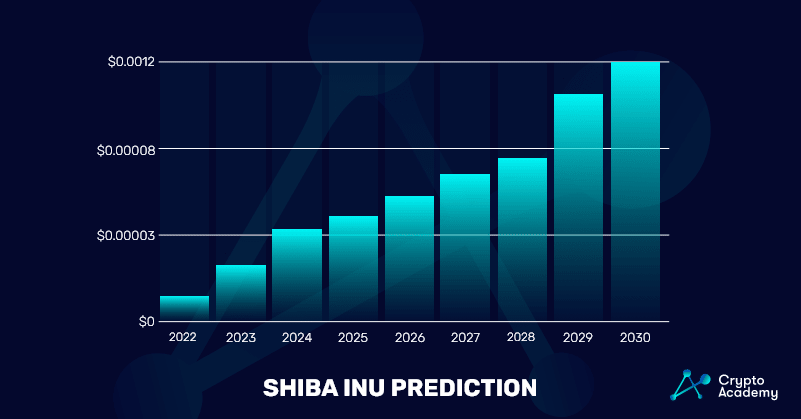 Here are the price predictions of Shiba Inu given by top authoritative crypto analysis websites.

How to Buy Shiba Inu (SHIB)

Binance is the most prominent platform for the ease it provides to users buying cryptocurrencies, such as Shiba Inu.

First, you are required to sign up for an account that is the entrance to users who want to buy any crypto listed on it. So you can log into your account or get yourself registered and verified on the Binance App or on the website using your email address and mobile number.

Next, you need to select a method to fund your account for buying Shiba Inu (SHIB) tokens. From the Binance website navigation, check the options available for your region by clicking on the “Buy Crypto” button. If you are using Binance for the first time, the use of bank transfers or credit cards is the most suitable option for you.

Visa and MasterCard both are supported on Binance. Shiba Inu (SHIB) can also be bought directly through Binance’s peer-to-peer service from other users. There also exist several options for third-party funding methods.

After selecting the payment method, you have to fill in your order details within a minute at the current price. After each minute, you would have to Refresh the page for a new real-time order price. Finally, Confirm your assets’ trade and store them either on your Binance account or on your personal crypto wallet.

Is Shiba Inu a Good Investment?

Yes, Shiba is a good investment with continuous innovations for regular price hikes making it the twelfth best cryptocurrency in the market.

Where to Buy SHIB?

You can buy SHIB on Binance, BTCEX, OKX, BingX, and Bybit.