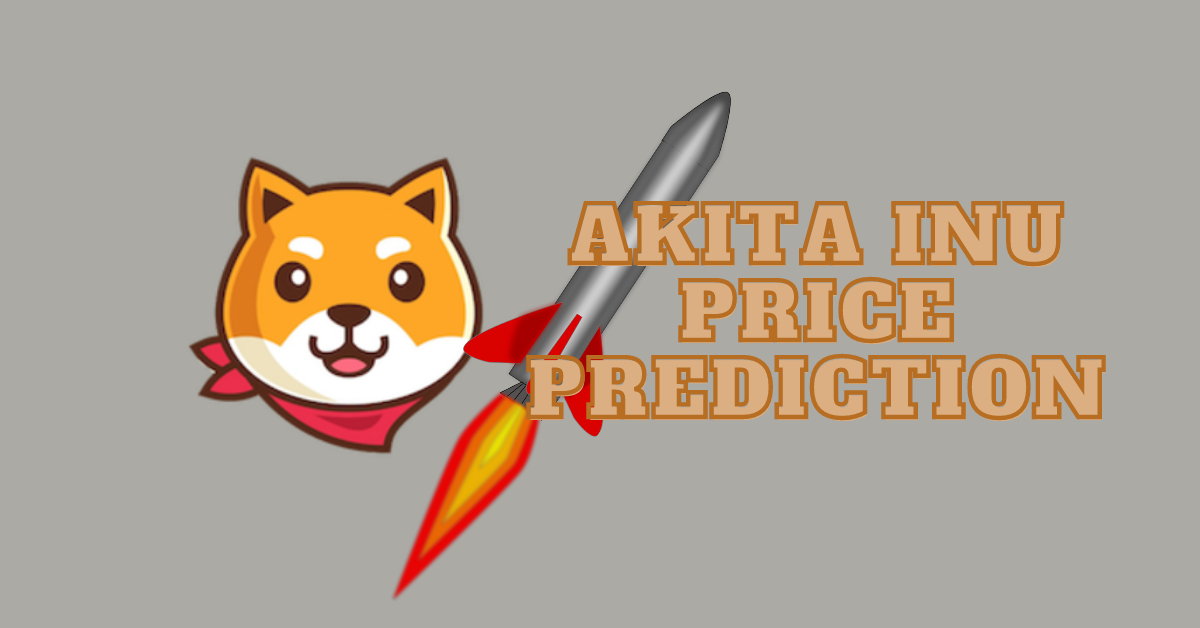 Where is Akita INU headed?

It all started with Bitcoin in 2009. But as more cryptocurrencies become a part of the crypto market, the harder it becomes for other cryptocurrencies to succeed in the future because of the competition. This is one of the reasons why each cryptocurrency tries to differentiate itself from others by offering new features to investors.

The success of Dogecoin paved the way for other cryptocurrencies to be created simply as a joke. Resembling Dogecoin, cryptocurrencies such as Shiba Inu (SHIB) and Akita Inu (AKITA) have been created. The latter has been getting more attention over the last few weeks, which has made many investors wonder if this Dogecoin-like cryptocurrency can have the same success as Dogecoin. In this article, we are going to focus on what we know so far about this relatively new cryptocurrency, including its background, features, price history, as well as its future. By doing so, you might have a better idea of whether investing in Akita Inu is a good idea or not. Let’s begin by looking at Akita Inu’s fundamentals.

What Is Akita Inu (AKITA)?

Akita Inu is considered to be a 100% decentralized cryptocurrency. The team behind Akita Inu refers to it as the little brother of Dogecoin. Its founders are not known, and it is a community-driven cryptocurrency. Since it is community-driven, the people in the community have a say in what happens with the protocols of the Akita Inu. The differences between Akita Inu and Shiba Inu are the token metrics.

Akita Inu has a total supply of 100 trillion AKITA. Half of this supply is planned to be transferred to Vitalik Buterin’s Wallet. Vitalik Buterin is the founder of Ethereum, one of the biggest cryptocurrencies in the world (second on market cap). Akita Inu is in fact built on the Ethereum network, where the other half of the supply is locked in a Uniswap Pool. Uniswap pools are pools where ERC-20 tokens of the Ethereum network can be traded, borrowed, or lent in a fully decentralized manner. In these pools, funds are locked through smart contracts, which are sets of codes that make it possible for each operation to be decentralized.

Even though Akita Inu initially started out in Uniswap, now it can be found in other decentralized exchanges such as MXC, HotBit, Poloniex, BKEX, etc.

Even though Akita Inu is still in its early phases as it was launched a few months ago, it has been growing ever since. More than 30,000 investors are already involved in Akita Inu trading, and this number of investors is likely to grow even more as Dogecoin maintains its spot in the top 5 cryptocurrencies due to its market capitalization.

But the fact that Akita Inu is still at its beginning suggests that it is not widely supported yet. So how can you buy AKITA tokens? While it may seem complicated, it is actually quite a simple process.

First of all, you need to find a trusted and not expensive exchange where you can buy cryptocurrencies. A good choice might be the Binance exchange. Then, you need to have a cryptocurrency wallet. When it comes to Akita Inu, the best wallet to choose is MetaMask since it is used solely for the Ethereum network. Once you create a wallet, you can transfer the coins you purchase from the exchange to your wallet. You cannot buy Akita Inu directly, so you can buy Ethereum (ETH) instead, and transfer them to your MetaMask wallet. Then, you can connect your MetaMask wallet with the Uniswap Decentralized Exchange, where you can use your acquired ETH to buy AKITA.

Once that is completed, you are an owner of AKITA tokens. Keep in mind that you should have additional ETH to cover the gas fees of the transactions within MetaMask. Also, you should make sure that the seed phrase of your MetaMask wallet is kept private and not in your smart device but rather written on a piece of paper.

These are the most important things you need to know about Akita Inu. More is yet to be found out about this cryptocurrency as it keeps gaining more attention each day. But let’s look at how its price has done on the market so far.

The price remained in that range throughout March. Midway through April, Akita Inu had another bull run, with the price reaching as high as $0.000008 This was a 2185% increase within 4 days. But investors who did not want to hold (HODL) their AKITA tokens sold them immediately after reaching this new high, so the price declined again at around $0.000001. In the month of May, Akita Inu started another bullish run. On May 11 of 2021, Akita reached its highest of all time with a price of $0.00003.

If you would have invested just $15 on AKITA tokens when it was first released, you would have acquired around 5 billion AKITA tokens. Selling them on the 11th of May would have reached a profit of around $150,000 from just $15. The price of Akita Inu has started declining again, however, and is now at around $0.000015 in the afternoon of May 11th.

Since Akita Inu is still simply an ERC-20 token that cannot be purchased directly, its circulating supply is unknown. However, based on its current price of $0.000015, the fully diluted market capitalization of Akita Inu is $1.5 billion. It is currently ranked at 2503 in the crypto market.

Since now you have an idea of how the price of Akita Inu has been moving in the recent weeks, it is important that you weigh your investment plan by looking at some of the expert’s predictions.

Digitalcoinprice predicts that the price of Akita Inu to remain somewhat stable in the following months. They predict that the average price can range from $0.000023 to $0.00003. Therefore, the price may not necessarily reach new heights in 2021 again. 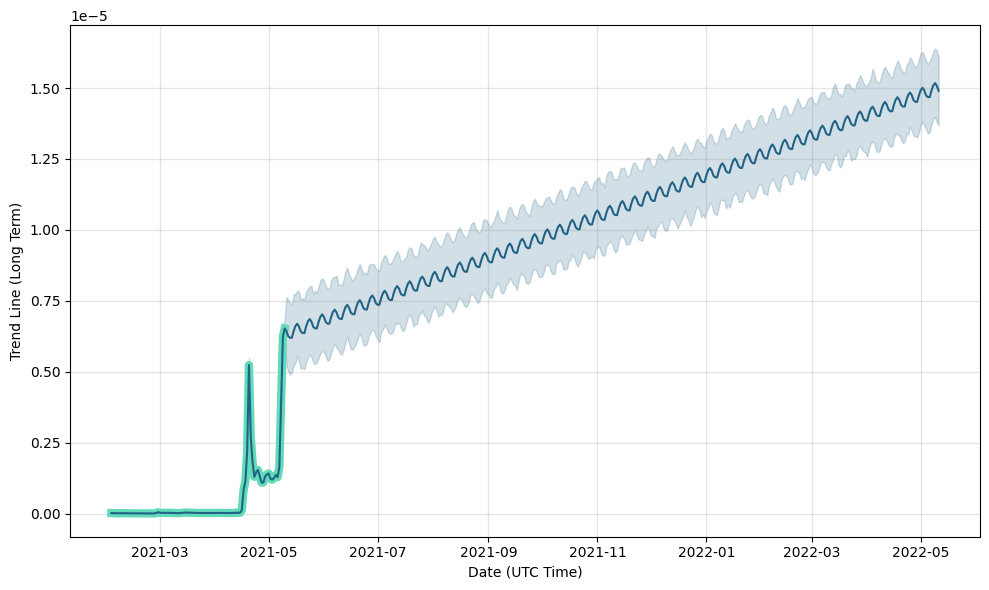 Akita price prediction for the next 12 months. Source: Walletinvestor

But what do these experts think about the long-term price of Akita Inu? 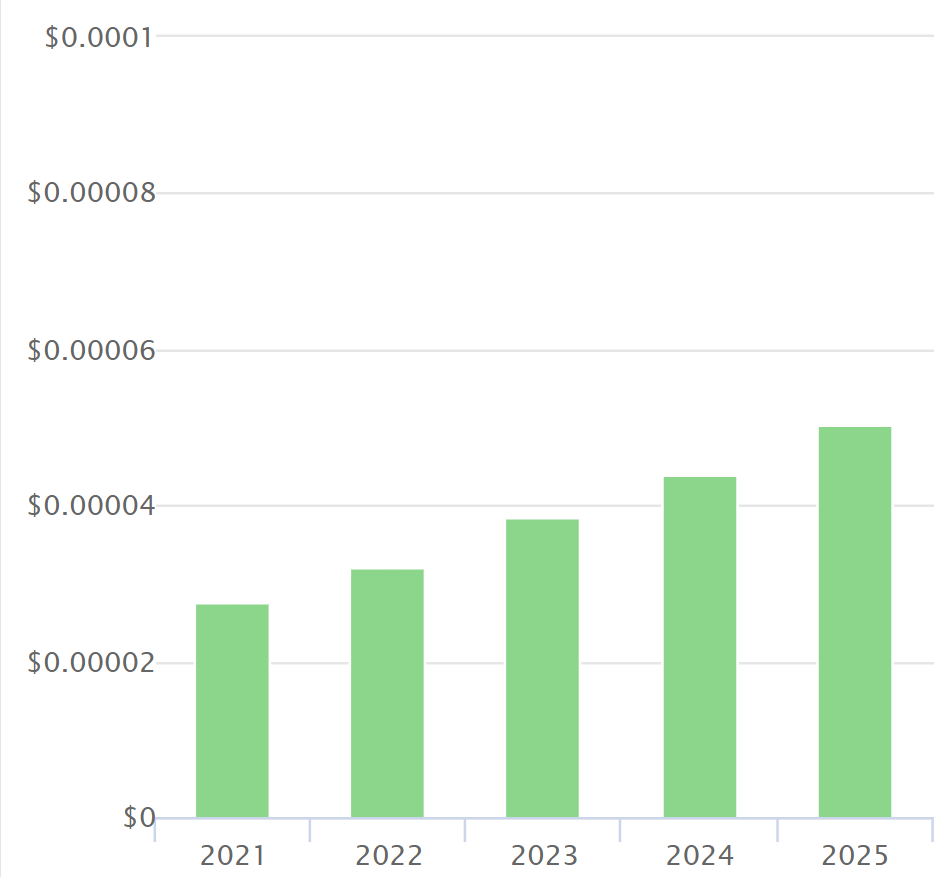 There are a lot of reasons why these forecasts are the way they are. So let’s focus on some of the biggest price factors of Akina Inu that can determine its future price.

What Potential Factors Can Affect the Price of Akita Inu (AKITA)?

Akita Inu has a total supply of 100 trillion AKITA, which is quite a large number of tokens. Because of this large number, Akita might have inflationary features. Therefore, its price might not increase at very big rates, and it is unlikely that the price of Akita Inu can come very close to $0.01 in the following years. However, if the team behind the coin decides to constantly burn some of the supply of Akita Inu, its price might as well become deflationary.

Since Akita Inu is a community-driven cryptocurrency, as its community increases, its price can increase as well. Coins like Akita Inu are so much related to the internet and the memes in social media. As the hype increases, Akita Inu might prove to be a very profitable investment in the long run.

As mentioned throughout the article, what makes Akita Inu interesting is the community behind it. Akita Inu has established a very good relationship with its community by continuously rewarding people that have a lot of likes or upvotes in social media posts related to Akita Inu. Whether Akita Inu can be the next Dogecoin, only time may tell. As the website of Akita Inu is slowly being built, new goals may also emerge that can make Akita Inu a serious investment.

Overall, Akita Inu has proved to be a very good investment so far, with people making thousands of dollars by investing relatively small amounts. Also, the price of AKITA is affordable for anyone, so the risk of losing money may depend only on the amount of investment you do. Daytraders especially favor the high volatility of Akita Inu.