Ravencoin Price Prediction 2022 and Beyond – Can RVN reach $1? 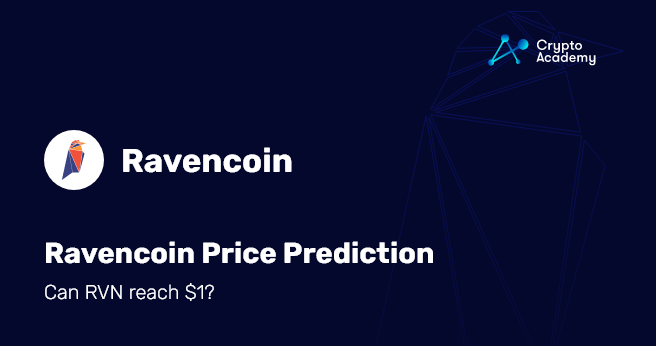 Ravencoin, based on a fork of the Bitcoin source code, was introduced on October 31, 2017. This Ravencoin price prediction explores the depth of the project, possible price movement as well as the price targets in the year 2022 and beyond.

Taking the name as an allusion to the famed television show Game of Thrones, the project has come far since inception. Ravencoin binaries for mining were made available on January 3, 2018, in a “fair launch” that excluded masternodes, ICOs, and premines. A blockchain use case particular to Ravencoin’s peer-to-peer (P2P) network is being implemented with the goal of handling a specific function effectively, that is, the transfer of assets.

The protocol’s goal is to motivate a network of computers to run the platform. It enables users to generate and trade new blockchain assets that can even stand for real-world goods, stocks, collectibles, or things like airline miles or other loyalty awards.

Tron Black, Joel Weight, and Bruce Fenton developed the Ravencoin whitepaper. They stand out from the majority of the cryptocurrency crowd because, prior to starting this project, they were all seasoned entrepreneurs and programmers.

With more than thirty years of experience as a principal software developer, Tron Black has served as the chief executive office (CEO) at various software companies. Fenton is well-known in the cryptocurrency community for serving on the board and as the executive director of the Bitcoin Foundation from 2015 to 2018. While, Weight is the renowned online store Overstock.com’s chief technology officer (CTO).

Ravencoin blockchain allows pretty much anyone to create tokens and send digital assets from one party to another using the open-source blockchain. It was developed from a fork of the Bitcoin source, which means the creators took Bitcoin’s code and modified it to include new features in order to achieve a slightly different objective.

Being a fork protocol stemming from Bitcon code it has the ability to issue tokens on the Ravencoin blockchain. These tokens might be limited in number. They bear a name and can be issued as securities or collectibles, depending on the token issuer’s preferences. You may create your own security token in a matter of minutes and sell it anywhere in the world.

Ravencoin is a fork of the Bitcoin code that includes four significant modifications that are;

The goal is to address the issue of asset exchange and transfer over a blockchain. Previously, when someone traded the coins used to generate an asset on the Bitcoin network, it could have been mistakenly destroyed and Ravencoin addresses this problem.

Ravencoin being a fork of Bitcoin, has decentralization and mathematics as its forts. On May 6, 2020, KAWPOW, a proof-of-work mining method, took the place of X16R and X16RV2. This not only provides security but is also made to withstand ASICs. It is done in conjunction with the commitment to fair distribution and no pre-mine. It guarantees that no one person or group will have or would be able to have enough hash power to try to launch a 51 percent attack or instigate any form of artificial market price shocks.

The crypto world is a decentralized system with no central control that needs proof of work to get returns. The protocol and network work independent of market and price.

The KAWPOW algorithm is made to foster more decentralization by being ASIC resistant, making it accessible to people without the expensive hardware required to mine the majority of other blockchains. A user creates a transaction on their Ravencoin client program, broadcasts it to the network’s nodes, and those nodes verify it before it is added to the entire blockchain.

Punching some keys and making a token does not create a protocol worth hundreds of millions or billions of dollars. You must prove the work.

How does Ravencoin work?

Although there are a few significant variations that allow for the generation and transfer of tokens generated on the network, the architecture supporting Ravencoin and the Bitcoin blockchain are fundamentally comparable. The Ravencoin network, assets, and protocols are all distinct from those of Bitcoin, even though some of the code may have been taken from a fork of the Bitcoin blockchain.

Ravencoin implements the KAWPOW Proof of Work consensus algorithm to minimize entry barriers for mining on its network. KAWPOW protects the Ravencoin protocol, authenticates transactions, and distributes freshly minted RVN throughout a network of computers running the Ravencoin software, much like Proof of Work does for Bitcoin.

RVN coins must be burned because they are intended to serve as the network’s internal currency to create token assets on the Ravenchain. Assets can be anything, including virtual products and things, shares in a project like equities and securities, real-world custodial items like gold or actual Euros, airline miles, a person’s hourly income, and more. The Ravencoin protocol will feature integrated voting and messaging systems in its future iterations.

The RVN coin is used to incentivize the blockchain miners to validate transactions and create new RVN coins. They get paid after the network’s other nodes confirm the new blocks. The decentralized Ravencoin network can operate due to mining, which also helps put new currency into circulation. By providing the network with its hashing power, the miners help protect it from any threats.

Prior to January 2022, miners received 5000 RVN for each legitimate block that was uploaded to the blockchain. But like Bitcoin, Ravencoin always halves its block rewards every four years. Therefore, 2500 RVN is the current block reward for miners.

Up until all 21 billion RVN coins have been minted, there will be constant halves. With the help of Ravencoin, even those with limited hardware resources may mine due to its simplicity. Miners can contribute energy from their personal computers to the network instead of spending money on expensive hardware.

The necessity of using the RVN coin to create new assets in order to maintain the Ravencoin network gives it its worth. There was no pre-mine, no ICO, and no coins set aside as developer or founder compensation. About forty percent of the coins have been minted already in the first three years of its launch.

With Ravencoin, users can burn some RVN to produce new cryptocurrency assets. Users can create custom tokens with their own features and financial characteristics by owning RVN. Following the creation of a new token on Ravencoin, the issuer can specify the token’s distinctive properties, including the total amount of tokens to be issued, the number of decimal places it should have, and whether it should be fungible or interchangeable.

Artists can utilize RVN coins to mint their newest collection of works on RVNFT as this platform functions as a non fungible token (NFT) Art Agent. As the RVN charge hinders the users from minting their own Unique NFTs, RVNFT has eliminated it to make mining easy for artists. Artists who high-mint, higher works receive certain discounted prices for buying large quantities of NFT and Sub-Asset packages.

Several projects on Ravencoin are under development. Some of the features for these projects are completed, some are under further testing, and others are upcoming. The submitted proposals and upcoming features include:

The Ravencoin price on August 4, 2022, is $0.037. It has a trading volume of more than $22 million. The CoinMarketCap ranks it as number 99. It has a market capitalization of $391.63 million. It has a maximum supply of 21 billion RVN coins and a circulating supply of 10.5 billion RVN coins. It is among the top hundred cryptocurrencies due to its good price performance.

We have predicted the price movement of Ravencoin (RVN) in the years to come based on the current market position and various projects in the development pipeline.

Our analysts believe that the in 2022 the price of Ravencoin would be at a minimum level of $0.03. The RVN price can hit a maximum level of $0.04 due to the core wallet having the execution of swaps and an in-detail view of swaps, with an average trading price of $0.035.

As per the forecast price and technical analysis, In 2024, the price of Ravencoin is predicted to reach a minimum level of $0.05. The RVN price can reach a maximum level of $0.09 by letting the orders get created, listed, or executed automatically, with the average trading price of $0.07.

For 2027, we forecast the price of Ravencoin to be at around a minimum value of $0.13. The Ravencoin price value can reach a maximum of $0.22 by creation, re-issuance, and tagging with assets, with the average trading value of $0.17. 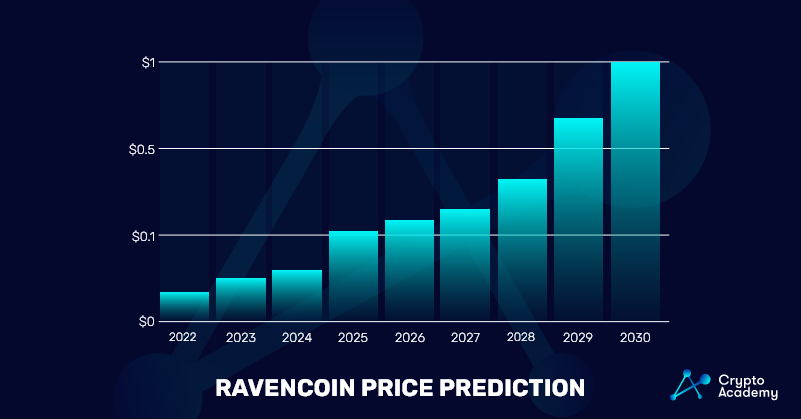 Given below are the optimistic predictions given by authority cryptocurrency prediction websites.

Priceprediction.net analysts predict the RVN price to reach a maximum level of $0.038 by the end of 2022. At the end of the year, the average price of Ravencoin can be $0.035. Their estimation through the five-year plan indicates the coin to easily reach the value of $0.15. Their specific business experts and analysts predict the highest possible price of Ravencoin to hit $1.19 by 2030.

How to Buy Ravencoin?

Ravencoin can be bought from a popular cryptocurrency exchange, such as Binance. Follow these steps to buy RVN.

Your Binance account lets you buy crypto easily. You will need to create an account and verify your identification. It would be helpful if you register on the Binance App or the website using your email address or mobile number.

Next, click on the “Buy Crypto” link on the top left of the Binance website navigation, which will show the available options in your country. You have to make sure that your Ravencoin transactions are compatible with your region. It is recommended to buy a stablecoin like USDT or BUSD first and then use that stablecoin to buy Ravencoin.

If you are new to Ravencoin, Binance recommends using a credit/debit card or bank transfer to purchase the coins. Binance supports both Visa and MasterCard, so you can easily and securely purchase Ravencoin using your preferred payment method. You can also buy Ravencoin on Binance using the peer-to-peer service. There are multiple third-party payment channels available too for different regions.

You have a minute to confirm your order at the current price before it is canceled. Your order will be recalculated after each minute based on the current market price. Now, after buying your cryptocurrency, you are able to store it in your personal crypto wallet or simply hold it in the account. On Binance, you can also trade it for other cryptocurrencies or stake them.

Is RVN a Good Investment?

Yes, RVN is a good investment because of future development in Atomic Swaps, Electrum Ravencoin, RavenWallet by MoonTree, RavencoinHelper OS, and Squawker Protocol.

Where to Buy RVN?

You can buy RVN on Binance, OKX, Bybit, DigiFinex, and MEXC.