Enjin Coin Price Prediction 2021 and Beyond – Is ENJ a Good Investment? 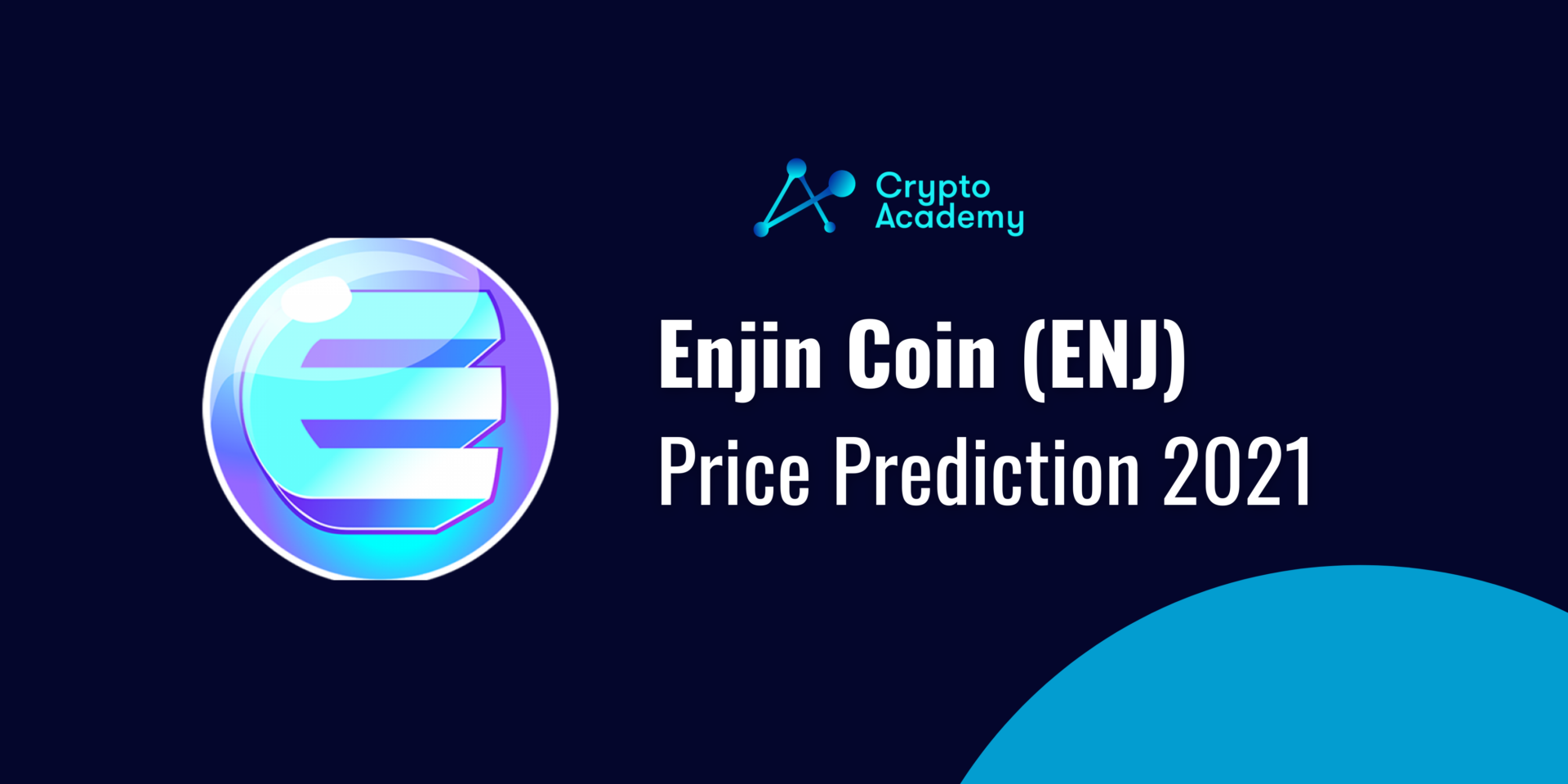 Update: November 23. 2021 – Enjin Coin still remains one of the cryptocurrencies with the highest potential. At the moment ENJ is trading at 3.71 and its price is expected to increase in the upcoming months.

Over the last few years, cryptocurrency trading has exploded in popularity. Things are quite different today than they were in the early days of crypto. What will be the future of the gaming sector? It’s a difficult issue, but blockchain technology seems to be one of the ways to boost gaming, and Enjin Coin seems to be a frontrunner in the future of gaming.

In this article, we will take a look at what Enjin Coin is, where it’s headed, what the market says about its future price, the factors that affect the price of ENJ, and whether or not Enjin Coin is a good investment for you.

What is Enjin Coin (ENJ)?

Enjin Coin is an Ethereum-based platform that is mostly targeted at the gaming sector. Anyone on the network will use it to handle and build virtual products for use in games, even those not developed by Enjin. The team’s goal is for tomorrow’s virtual worlds to transform into a shared augmented reality. Through providing software and resources to gaming families, the organization has accrued a network of over 20 million players since its initial launch in 2009.

Their autonomous and decentralized team has made a significant impact on where blockchain gaming is today. Enjin’s blockchain program, which was announced in 2017, helps game creators to place their in-game properties on the blockchain, rendering them not only publicly verifiable and permanent, yet often transferable throughout games.

Since game development is difficult enough as it is, Enjin’s plan is to build a set of tools and services that enable game developers to incorporate the technology behind blockchain into their games without having to write any blockchain code. Enjin’s network is based on the ERC-1155 token protocol, which they’ve developed and saw through for over a year before it was approved as an official Ethereum token standard.

In November 2017, Enjin Coin launched an Initial Coin Offering (ICO) with a price of $0.024 per coin, according to Coinpedia. When buyers became more interested in Enjin Coin, the price began to slowly increase until ENJ was trading at $0.14 at the end of December 2017.

ENJ immediately climbed to $0.18 in early January 2018, following the bullish pattern. Enjin Coin then hit an all-time high of $0.49 on January 8th thanks to a market surge. Later, the price began to fall, and by the end of January, it had dropped to $0.25. Within a month, ENJ had plummeted to $0.09 and the price had slowly improved. Later, when most altcoins began to collapse, ENJ began to fluctuate.

At the end of 2018, Enjin Coin was worth $0.04. Then, in January 2019, ENJ was trading at $0.04 due to the bearish trend. By early March, the price had skyrocketed to $0.24 as Enjin Coin drew the interest and attention of buyers, then continued to plummet again. For some months, ENJ exchanged between $0.06 and $0.15 as South Asian state exchanges reported tightening of crypto markets. Enjin Coin was valued at $0.07 at the end of 2019.

In January 2020, Enjin Coin began trading at the same $0.07 price point. With several differences, the price plummeted to $0.04 by mid-March as a result of the COVID-19 outbreak, which caused a crypto asset plunge. Later on, when the economy reopened for business, the price began to rebound. Then, by the end of August, the price had dropped to $0.23, and by early November, it had dropped to $0.11. Later, at the end of November, ENJ was able to maintain its stability as the price of Bitcoin continued to rise. Enjin Coin later priced at $0.13 at the end of the year 2020.

Enjin Coin had a selling price of $0.13 when at the beginning of this year. On a positive note, the price began to climb and is now trading at $3.06. The price of Enjin Coin is predicted to continue growing to a new high if investors place their focus on the coin.

At the time of writing, the all-time high for ENJ is $4. If the group focuses on lowering transaction fees, the coin’s value will rise. Let’s see what the market says about where Enjin Coin is headed this 2021. However, the price forecasts for Enjin Coin are divisive. Some websites are optimistic about Enjin Coin’s potential value, whereas others are less secure about their ENJ predictions.

Now we’ll take a look and analyze various crypto market analysts’ long-term price predictions for Enjin Coin. ENJ is expected to rise to $0.55 by 2024 according to CryptoGround. DigitalCoinPrice provides far more optimistic predictions, forecasting ENJ to rise to $4.64 by 2022, then grow steadily throughout the next few years, and ultimately reach $10.69 by the next five years. 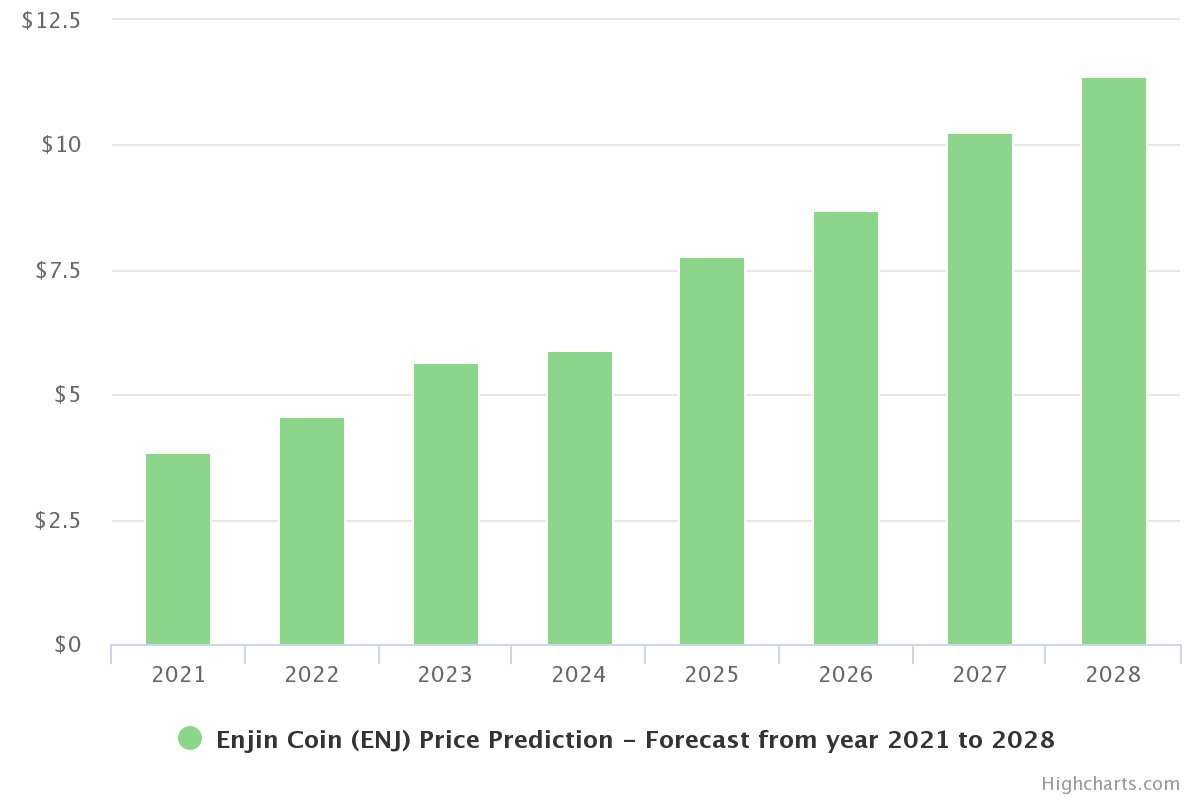 As per Coinpedia’s predictions, the price of Enjin Coin is expected to reach $25 by the end of 2022. ENJ can grow as a result of some inventions and future partnerships, says Coinpedia. ENJ may be considered the best gaming cryptocurrency on the market in five years, and by then, it could be worth $60. 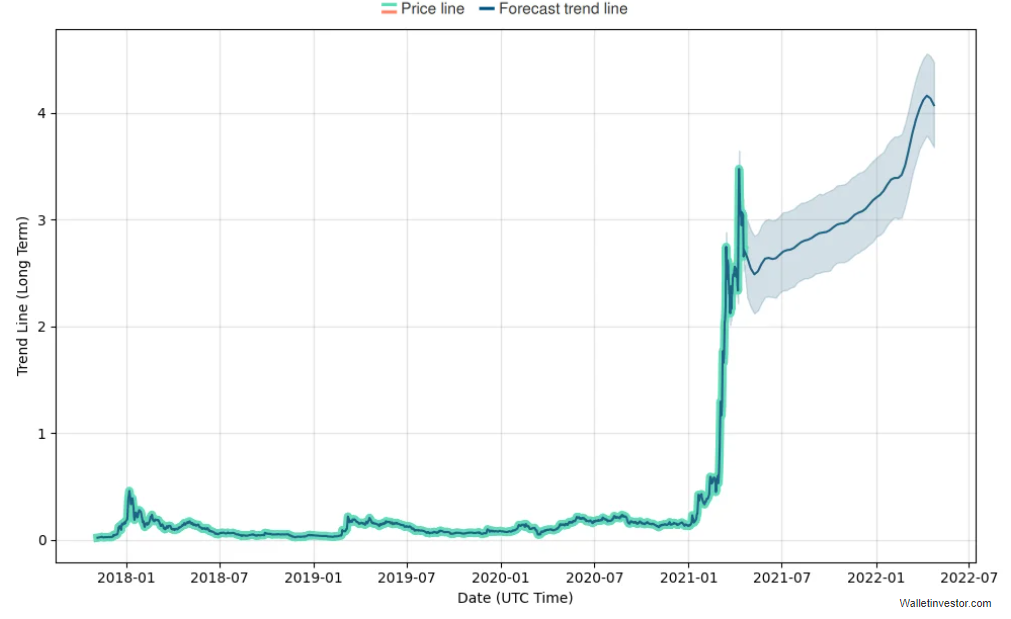 What Potential Factors Can Affect the Price of ENJ?

At this point in time, the Enjin Coin price is influenced by two major factors; usage and reputation. Both are related in some ways, but they’re both two separate topics that should be discussed.

The rule for usage is simple. As long as people continue to use the Enjin Coin to buy in-game products, the price will as a result, continue to grow. Because of the increased usage, the coin’s value would rise, resulting in a price spike. In general, new games can be developed or existing games can be introduced to new players to improve overall usage. Both scenarios are positive, but trying new games may be a better choice. It could lead to network enhancements and ultimately more players.

When it comes to popularity and reputation, trading is the main focus point. Trading volume has a lot to do with supply and demand. And the fact that the price is determined by how many tokens are purchased and sold, an increase in market value would raise the value of ENJ.

Regulations are another factor that can influence the market and Enjin Coin. Cryptocurrencies are currently unregulated in many parts of the world. This means that there is no governing body in charge of them. If they are limited at some point in the future, the price could likely change. At this moment, the main issue is that no one knows which direction the price may go. Some predict that it may rise, meanwhile others predict that it could fall.

There’s no denying that Enjin Coin has a promising future ahead of it. Many major gaming websites, companies, and developers looking to diversify themselves and their asset groups are drawn to it because of its creative existence and technology in the gaming industry.

If you want to invest in any cryptocurrency, it’s important to pay close attention to trends and predictions. Experts will also provide you with all of the knowledge you need to make the right decision possible, and they will do so as accurately as possible.

ENJ has a bright future without a doubt. While it’s unlikely that ENJ will see any drastic increases that will propel it to $10 or more anytime soon, it’s possible that it will see stable, gradual growth as its usage and reputation keep growing. With a price of $0.13, Enjin Coin began the year 2021. The token began to rise in value, reaching an all-time high of $4 on April 9th, 2021. ENJ may focus on alliances and collaborations with specific gaming websites. It may launch new offerings to exacerbate the scaling challenge, and it may be valued much higher by the end of 2021.

It’s important to remember that, regardless of what the experts say, investing in cryptocurrencies can be risky. So, before adding any investments to your portfolio, make sure you do your own research and ensure a robust strategy that works best for you.

Besides all the positive forecasts talked about until now, Enjin Coin generally has a lot going for it just based on its underlying framework and technology. Firstly, Enjin Coin is leading the crypto market in blockchain gaming. Since Enjin is a pioneer in a sector that is bound to boom in the coming years, the price of ENJ, which is used on its website and whose utility will continue to grow, will inevitably benefit.

Enjin also offers a variety of products that are already being used so widely. For instance, Enjin Network is a social media site and content management system. Enjin Coin also has its own wallet for storing your ENJ, called the Enjin Wallet. On top of all this, Enjin allows game developers to create their own custom currency for their players which are then supported by ENJ.

Nonetheless, it’s important to diversify your cryptocurrency portfolio carefully. With that said, it’s good to choose cryptocurrencies that fix real-world usage problems and are already operational. Overall, Enjin Coin possesses a lot of potential for a promising future and may very well serve well as a kind addition to your portfolio.