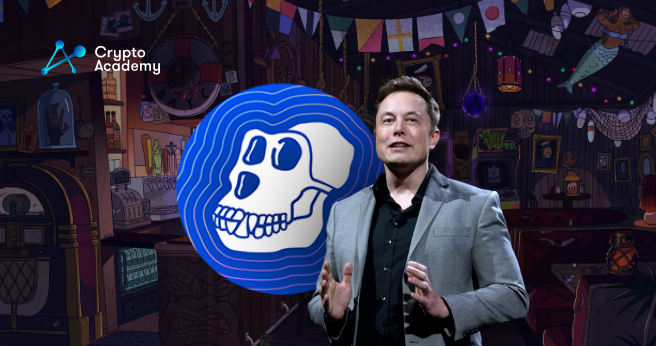 As of today, Elon Musk affected the price of ApeCoin. Musk changed his Twitter profile picture to a collage of Bored Ape Yacht Club NFTs.

The action of changing his profile picture surged the price of APE. About $1 billion went into ApeCoin after Elon Musk made fun of Bored Ape Yacht Club owners. According to some suggestions, Musk may have “aped” into the popular collection while prices are stable.

After Elon Musk caused confusion in the NFT community, ApeCoin went up and then down today.

Twitter’s new owner used a picture of several NFTs from the Bored Ape Yacht Club ecosystem as his Twitter avatar. Concerning this action, Musk demonstrated that he still has significant influence over the cryptocurrency market today. Within minutes, ApeCoin’s value jumped from $4.13 billion to $4.98 billion, 21.44%. At the time of writing, Musk had an estimated 90,8 million Twitter followers and was still rocking the Bored Ape collage.

Following his latest social media posts, rumors began that Musk had “aped” into the Bored Ape Yacht Club’s collection. However, these are only speculations, and he has yet to make a buying announcement. Recently, Musk was photographed with members of MoonPay. In addition, it is the firm that assisted celebrities like Post Malone and Paris Hilton in purchasing their own Bored Apes. This seems to be the source of those rumors. Despite this, MoonPay purchased the rarest NFT in the collection, Bored Ape #1837, for 569 Ethereum, or $1.5 million, after the photo appeared online.

As per his Twitter avatar change, Musk tweeted something that made fun of the “Bored Ape” community. To use the Bored Apes as an avatar, he just saved the picture and utilized it. “It looks kind of fungible,” he remarked. Non-fungible assets, such as Bored Apes, are defined as those that have only one owner and are hence not considered “fungible.” Seems like the message was clear from the young entrepreneur to the company.

After this event, ApeCoin’s gains were shortly lost. Currently, APE is trading at roughly $4.45 billion. For ApeCoin’s four-hour chart, the 200-hour moving average appears to be a place of support. Furthermore, to recover from the 50% drop it suffered over the past week, it must now beat both the 100-hour and 50-hour moving averages. The key resistance levels that must be overcome are $17 and $18 levels. On the other hand, a long-term close above this supply barrier could push APE up to $20 or even $23, but only if it lasts.

Moreover, one must note that if ApeCoin does not hold the 200-hour moving average at $14.30 as support, more selling could happen. Breaking this support zone could make traders get out of their positions. Additionally, this could make APE go down even more. Considering these conditions, if there is no other commercial from Musk, prices could fall to $11.50.